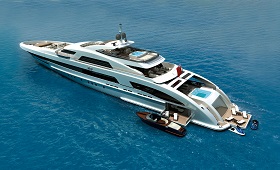 Bad news for Russian billionaire tycoon and owner of Chelsea Football club, Roman Abramovich who is rumoured to have lost one of his luxury yachts, which also happens to be one of the largest of his personal fleet, in a game of poker. This latest news was first reported in a Russian newspaper, but has been flatly denied by the football magnate.

“The story is absolutely, completely, entirely false,” John Mann, personal spokesperson for Abramovich, told European media groups following the publication in three separate Russian newspapers- which were themselves reputedly published on the basis on an original version first printed by the Italian press.

The quotidian daily newspapers Moskovsky Komsomelets claimed that the billionaire lost his $500,000 yacht during a poker game played during a visit to Barcelona where he was watching Chelsea playing in a football match.

The name of the yacht that was forfeited has not been published, neither has the source from which the story originated….woe betide them if that ever happens! We’ve all seen Rock ‘n’ Rolla…

Another of Russia’s most popular daily newspapers, which sell millions on a day-to-day basis, the Izvestia and the Trud, also ran with the gambling story and cited, as their source of information, the Italian publication La Republicca.

John Mann also added that Abramovich had not even visited Barcelona on the dates that were published and emphasised that the stories were entirely fabricated, “We have instructed our lawyers to examine legal action” over publication of the story, said Mann.

The yacht collection belonging to Abramovich’s is estimated to be worth in the region of $100 million, and has even been called the ‘Roman Navy’ by some witty British journalists.

Furthermore, one Russian newspaper has even claimed that gambling and poker have become quite a headache for the billionaire’s girlfriend Daria Zhukova causing arguments, huffle-puffs and headaches for the pair. The arguments could be avoided if he took up some other famous gambling games that are specifically Russian in origin, such as roulette, although whether this will help with the headaches is a matter of debate.