Gambling sponsorship has become controversial in UK sports. Many people are campaigning against its use, and Swansea is the latest football team to take action in the sporting world. But across the pond, it’s a different story. The NFL is heading in the opposite direction. In this blog, we’re going to take a closer look at what’s going on in the world of sports sponsorship.

But first, I just want to say that I made myself mad writing the title for this blog. And, if you’re reading an article on this website – dedicated to UK-based casinos as it is – then it might have made you mad too. Why? Because everyone knows football’s the game where you kick a ball with your foot – no handling. If you pick the ball up during play, it’s probably rugby, American football, or netball.

Anyway, petty squabbles that I started myself aside, let’s take a look at what’s happening with gambling sponsorship in sports.

It’s legal for sports teams to use gambling sponsorship in the UK, but it’s becoming increasingly controversial.

If it comes into force, the ban will include all advertising on sports kits. The HoL wants to phase this in for teams below the Premier League with a cut-off date of 2023. This gives teams plenty of time to find alternative sponsorship.

Swansea is the latest team to make changes, despite no ban being in place yet. In fact, it may never come in because the select committee is there to make suggestions, rather than to change the law directly.

Still, sports teams don’t want future changes to catch them out and are taking a proactive approach to sponsorship. Pressure from gambling campaigners has also helped the

Swansea’s new sponsor for the 20/21 season is Swansea University.

The NFL: Going In The Opposite Direction

The USA has some of the tightest gambling sponsorship and advertising laws in the world, but with the NFL, things are different. They’ve been softening their stance on gambling advertising in recent years, and gambling companies are seeing it as an increasingly lucrative space.

Recent changes include allowing fans to bet inside stadiums and the use of gambling sponsorships. Caesars Entertainment (of Las Vegas Caesars’ Palace fame) and the NFL partnered up last year. These shifts represent a significant shift in the relationship between gambling and the NFL.

Many states in the US outlaw gambling, but again, this seems to be changing, spurred on maybe by the ever-increasing acceptance of gambling within popular areas of life (and Football in America is a HUGE deal, as most of you already know).

They acknowledge they need to strike a careful balance between giving fans an extra level of fun and increasing the risk of problem gambling.

In the future, the US could see a much more European approach to gambling, with kiosks in stadiums and gambling sponsorship on kits.

The UK and the US seem to be on opposite journeys with gambling sponsorship – we’re moving away from it and they’re moving towards it. Maybe we’ll meet in the middle? Maybe we’ll become the US of the pre-00s? Who knows where the chips will fall… 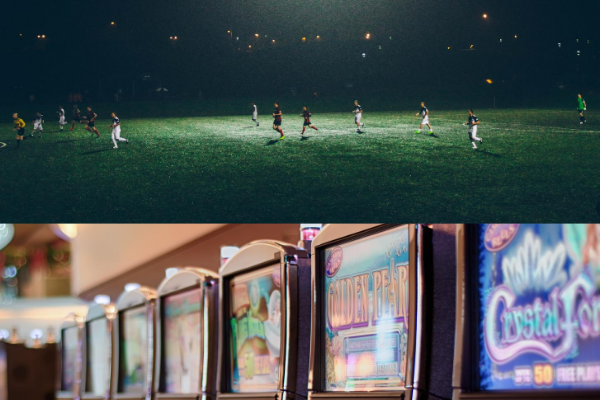 4 thoughts on “Gambling Sponsorship: Out For Soccer, In For Football”