Everyone has a book in them! And every slot studio has a game that features a secret book, or a magic book, or an ancient book… or in this case, a steampunk style book!

That’s the theming from this Book of Oz slot game, which is a co-release with Microgaming from Triple Edge Studios, a studio so edgy that they have three edges! In fact, the company is pretty cutting edges, having only been launched in 2018, and is already making a stir.

Book of Oz shows nicely why they are.

The Book of Oz slot game is really beautiful looking and does more than just paste some theming on top of a game engine. This is a really well-themed game, and it will attract plenty of players on visual terms alone.

They’ll want some meat though, and the game delivers with great bonus features in the base game the likes of which you’ve never seen before, and which we’ll cover later.

But there are a thousand-and-one books on the slot market, should you open this one?

Triple Edge Studios – The Developers of Book of Oz Slot

Triple Edge Studios are babies! The company is just two years old, but it has a long history because it is part of Microgaming.

Triple Edge is one of 10 studios that have a link with Microgaming, producing exclusive content for them.

This is something more and more giant companies are doing. One: the big companies have plenty of cash, so they can buy up or sign deals with smaller companies; and this outsources game development to independent (or quasi-independent) entities, with the hope that these smaller, usually younger companies, will have the agility to be innovative. The studios get a link with one of the giants of the industry and could see their titles become massive hits.

The company innovates with great new game features, but their games – including their big Playboy tie-ins released via Microgaming – also look fantastic.

The Facts and Figures about Book of Oz Slot

The theoretical return to player on Book of Oz is 96.31%. This is a good figure and slightly above what we’d expect: most games are around 96%, and high volatility slots often have slightly lower figures. RTP is not a scientific prediction of how your game session will go though, it is a long-term measure that assumes behaviours on behalf of the player and could vary wildly from how you do – in either direction.

High volatility usually means big prizes, because highly volatile games are expected (again, it’s not a guarantee) to pay out bigger prizes but to do so less often. The maximum prize on Book of Oz is 25-times your stake, and you can bet as much as £25 on this title, from a 10p start. You’ll be wagering on 10 pay lines – a low number.

The game plays on a standard reel-set, and you can enjoy it on any device that supports HTML5 and JavaScript. 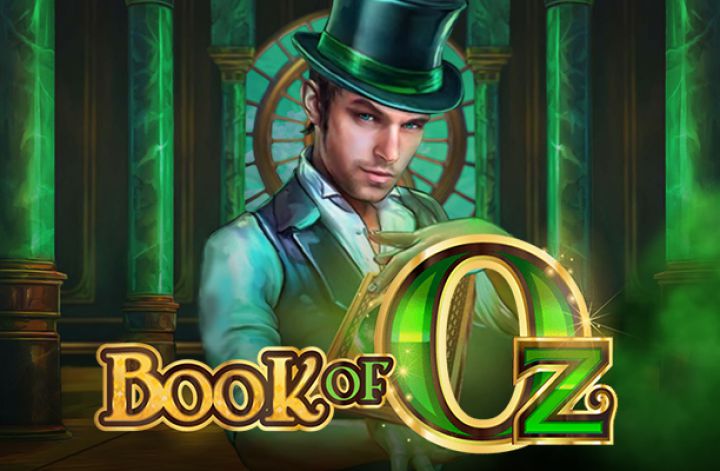 No slot player wants to spend ages learning arcane new control methods, so you’ll be pleased to see a really elegant and simple button set at Book of Oz.

Front and centre is the big, green spin button, flanked by the Max bet and Autoplay functions. To the left, the player sets the bets, and at the far left of the screen is the menu.

The pay-table tells you all you need to know with regards to prizes, at least until you hit the bonus features.

It opens with the usual card symbols, starting at 10s, before climbing into the high-payers with a key, a book, a lion’s head, and a wizard.

There is also a scatter – a golden book – expanding symbols, and a wild (the Oz symbol).

The bonuses here are many and varied!

We’ll start with a standard scatter-triggered free spins round.

At the start of the free spins round one symbol is designated as special, and will expand to complete wins when appropriate. It is via this symbol that the 5,000-total-bet top prize can be won.

The scatter also pays out in its own right.

Respins are unique. At the end of a spin, you can pay to respin any reel and continue to do so for as long as you are willing to stump up the cash. We haven’t seen a respin feature like this in any other game.

If originality was the aim for Microgaming’s gathering of smaller studios then Triple Edge have really come up trumps with this title, which is a hit two years after its release.

The look and feel are worth the entry price alone, but the innovative extra features make it worth your while to stay around.

Big paying free spins rounds are always welcome, but so are unique new ideas and the buy-in respins are certainly that. Remember, if you are buying features to keep an eye on your balance and to always play safely.

Hit the biggest win in the free spins round – complete with expanding symbol – and you could walk away with an impressive £125,000.

Cloaked in a great atmosphere and already spawning another sequel, with another very special bonus feature, Book of Oz slot has already shown it’s magical and that its developers are wizards of the reels. More of the same, please!