The sequel to Clover Rollover is bright and modern despite staying as true to the original as possible. Paul Gilbert, Commercial Director at Eyecon said at the time of its release: “Clover Rollover is one of the most recognised and popular slot games in the UK Bingo segment,” and even went as far as to say it will bring more entertainment to the network of bingo players!

Bets can be set one of two ways – by adjusting the bet per line and/or the win lines. Adjusting the win lines below 5 reduces your chances of winning. We recommend having all 5 win lines in play to give you the best possible chance of winning. The minimum bet is 50p and the maximum is £50 per spin. Manual play can be initiated by pressing the large spin button to the lower of the reels. Autoplay is an option; this only requires you to choose between 5 and 100 spins to get underway.

There is a total of 9 paying symbols on the reels: Q, K, A, Guinness, leprechaun hat, red-haired woman, Celtic cross, a pot of gold and a four-leaf clover. Low-value symbols are those card values with pays of up to 25x, 50x and 100x respectively. Medium value symbols pay between 200x and 1,000x for a five-of-a-kind combination while the high paying symbols, the cross, pot of gold and the clover pay between 5,000x and 10,000x your stake. 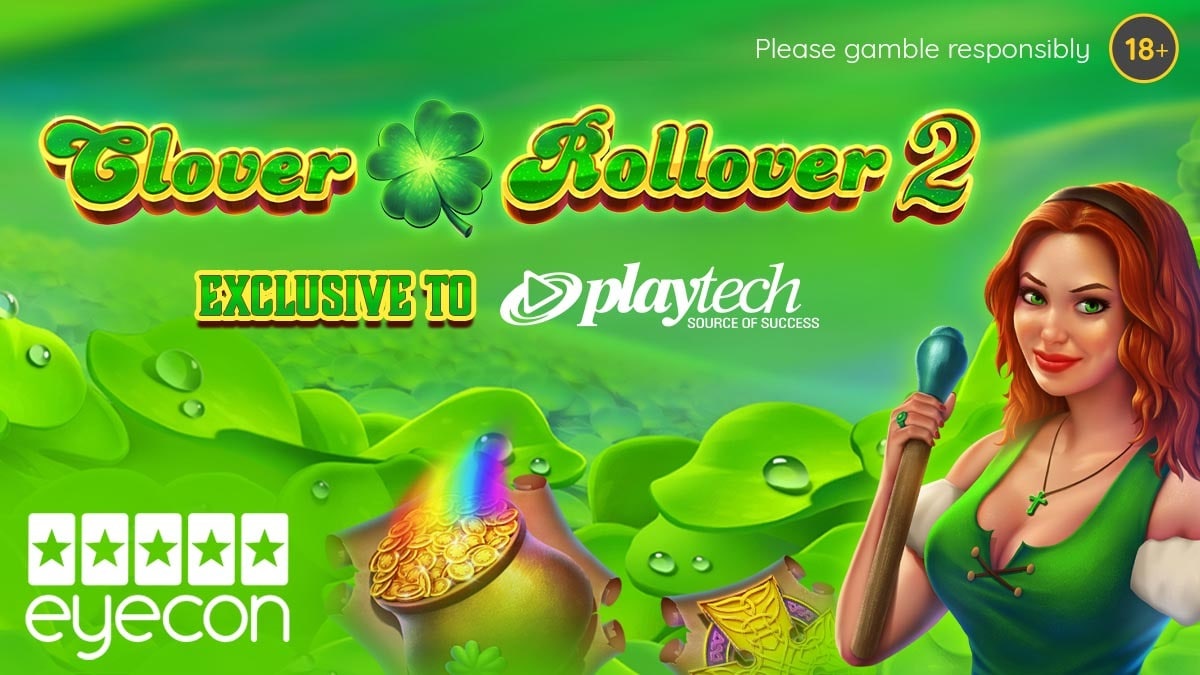 Here’s where things get a little disappointing. Clover Rollover 2 offers nothing but base game wins – no spins, no re-spins and no wilds! What you see is a 5×3 slot machine offering limited fun. However, there are three jackpots that can be won randomly on any spin. Two of the three-tiered jackpots are designed to be won before a set time, leaving the biggest rolling over until it finally decides to drop.

One thing we should point out is that wins pay all ways! This means wins are generated from left to right, right to left and in the middle. Wherever you have at least a 3-of-a-kind combination (on active win lines), a win is awarded.

Just because Clover Rollover 2 is targeting the online bingo sector doesn’t mean you need to be a bingo player to enjoy what it has to offer!

Any online casino featuring either Eyecon or Playtech will offer this title but is it worth playing?

The graphics have been updated to keep in with the vibrancy of Eyecon’s games and if you’ve played the original, it seems there’s nothing much to keep you ticking over – no bonus features whatsoever. But that mystery 3-tiered jackpot system can spring into action when you least expect it and award great big wins!

When was the Clover Rollover 2 slot released?

What is the RTP of the Clover Rollover 2 slot game?

The RTP (return to player percentage) of the Clover Rollover 2 release is 93.98%.

The layout of the Clover Rollover 2 slot is as follows: 5-reels, 3-rows and 5 win lines.

Clover Rollover 2 is a Luck or Irish themed game with symbols that are in-keeping with the theme.

Accessible on all devices, Clover Rollover 2 offers the same gaming experience whether you play on desktop or mobile. Rotation of the device may be required but the layout remains identical to that of the desktop slot machine.

What is the variance of the Clover Rollover 2 slot?

Clover Rollover 2 is classed as a low variance slot title. To give you an example of how volatility works, high volatility games pay out less often on average but the chance to hit big wins in a short time span is higher.

Betting on the Clover Rollover 2 slot game starts at 10p per win line – that’s 50p per spin to a max of £50 per spin. The top prize is the base game jackpot multiplier of 10,000x your stake.

Clover Rollover 2 offers nothing but base game wins.

Clover Rollover 2 is hiding a three-tiered jackpot system that can spring into action randomly on any spin.

Is there anything else that I should know about the Clover Rollover 2 slot?

Wins are achieved by matching at least a 3-of-a-kind combination anywhere on the Clover Rollover 2 reels.

Go ahead with Rainbow Riches by Barcrest. Rainbow Riches dates back to 2009 and is a popular land-based and online casino game. A jolly leprechaun aims to take players on his road to riches while throwing in a shot at a wishing well bonus and pots of gold! A max win of 500x can be triggered on any of the 20 possible win lines. Three pots, three wishing wells or three leprechaun icons is all it takes to get involved with the interactive bonus features.