Count Duckula, in case you didn’t know, was a cartoon character in several UK TV series, starting with the legendary Danger Mouse that is old enough for me to remember them!

Duckula was a villain, but that didn’t stop him becoming a hero to a generation of kids who are now old enough to enjoy a rush of nostalgia as they ager – safely and responsibly – on this fun, cartoon game.

The designers of this Count Duckula slot game are BluePrint and they have done a great job in preserving the atmosphere of the TV series, which had a great sense of humour that was often more adult and sophisticated than you would expect for a show for kids. It’s aged well.

The Count Duckula slot game is also retro, and feels quite like an 80s cabinet game, including in some great fun bonus rounds.

There’s a progressive bonus in the shape of a cash pot – another retro name – prize.

There’s already a great deal to like about this game, for someone of my age, but should you join this aristocrat?

The Lowdown on: Count Duckula Slot

Go back to the 80s with this clever, genuinely amusing cruise around the Danger Mouse universe. You don’t need to remember the classic kids’ cartoon to get stuck into this feature-rich game from an industry titan.

Count Duckula was made by Blueprint, a huge company with more than 200 slots, and a load of big-hit Megaways titles including Fishin’ Frenzy Megaways.

When was the Count Duckula slot released?

What is the Count Duckula RTP?

What reels and pay lines does the game have?

What is the theme of the Count Duckula slot?

Can I play on this game on mobile?

Yes, you can play this game on any device that supports Flash, JavaScript, and HTML5.

What is the variance of Count Duckula slot?

This is a medium variance game.

There’s no progressive on this game.

Does Count Duckula slot have free spins and bonus rounds?

There is a free spin round, and other bonuses in the base game. There are lots of bonuses picked from a Wall of Fame, and including an extra-wilds free spins round.

You can win six bonuses.

There’s a jackpot king version of the game linked to a progressive title, The Dog House is a recent cartoon-styled game.

BluePrint Games are a big-time company, rated by the audit site that we use as the third biggest provider in the UK market, with nearly 200 slots for players to choose from.

Of course, we can’t cover anything like that number, but we will say that Blueprint games cover the whole gamut of the slot world.

They’re old, with roots going back to 1957, and, they’re based in Germany, as part of the Gauselmann Group, a company that started out putting cabinet games into bars and clubs.

Moving into the online world isn’t always easy, but Blueprint have done it with huge aplomb, and if you play slots at all in the UK you’ve probably played one – or more – of their games.

They release titles regularly, and their most recent launches are: Legacy of the Gods Megaways, Rhino Rampage, The Lost Treasures, Sky Vegas Megaways, Medusa, and King Kong Cash, one of their Jackpot King linked progressives.

Coming soon from Blueprint are Gods of Egypt, Eye of Horus Gambler, and Clone Bonus. They’re sure to do well.

Count Duckula was released in 2017, so it’s a bit of old-timer in iGaming terms. It’s got a theoretical return to player of 93.349%. That might sound low, but you should always remember that this measure is a theoretical one that supposes that the player will behave in an idealised way and is also a measure of a game’s entire life-span, not your session playing it. The cash pot will also eat into the RTP, as these prizes take a little piece of every bet to build up a prize pot that’s really worth winning.

The variance is medium, so you should expect an average pay-out to prize size ration.

The 20 pay lines on a 5-by-3 grid are very standard. You’ll need Flash to play this game so turn it on and make sure you have the latest version. 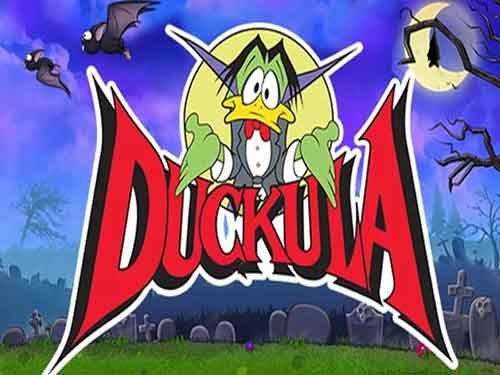 Count Duckula slot hasn’t aged when it comes to controlling the action, and this control panel could have been produced this year.

There’s a big green spin button to the right of the reels, over an auto spin control that gives you some very sophisticated options.

The betting controls are to the left of the reels, with a menu control underneath. All your financials run along the bottom of the screen and you should look for more information in the game frame.

It’s very easy to use, and, as with every game, your first stop should be the pay table and the game instructions.

Let’s explore that pay table for you:

The rapid-fire cash pot can be awarded from a set of five bonuses in Duckula’s Wall of Fame, which is triggered by three scatters.

During the base game, Dukula puts wilds onto the reels.

The Wall of Fame bonuses are the cash pot, a prize wheel, a tombstone prize pick, an ancestor bonus prize pick, and two free spins rounds.

This is a deep and beautifully developed game that reaches well beyond the cartoon imagery of the series on which it is based. And that series had hidden depths of humour that made it much more than just a silly kids’ show. To faithfully reflect that in a game is such an achievement.

We love this game. It looks fantastic and lives up to its theming. Plus it’s got huge bonus potential with features popping up everywhere, in the base game and in an extremely rich set of sub-features and bonus games.

Free spins might see you winning big, but it’s the cash pot that players will want to trigger. You can often see how big that prize is going to be as you log onto your favourite online casino site.

Whether you do win or not, you’ll love this game, which is one of our favourites from Blueprint and one we’d love to see you benefit from a follow-up. Don’t worry if you’ve never ever heard of Duckula, this is a splendid game for all slot players.