It was in the autumn of 2020 when Microgaming teamed up with global sensation Deadmau5, the thirty-something Canadian DJ famed for his huge charting success. The exclusive branded title was created in collaboration with Eurostar Studios.

Guaranteed wins and randomly dropping wild reels ensure the highest level of excitement whether you’re a low stakes player or a high roller.

Accessible across all devices, Deadmau5 (pronounced dead mouse) even features the DJ’s trademark crazy bunny symbol! In a bid to bring a taste of Ibiza to your living room, Microgaming have even incorporated the DJ’s electropop soundtrack!

With the mobile player in mind, the developers set about producing a slot game that would be identical on both desktop and smartphone/tablet and this has resulted in an immersive and uncluttered gaming screen. There are 243 ways to win per spin which means no longer are you required to land matching symbols on a specific win line to generate a win. Adjusting your bet can be done via one of the many pre-set stake buttons or by sliding the bar from 20p minimum to £100 maximum.

A party on reels, that’s literally what Deadmau5 is and you’ll notice that with all the women dancing the night away. Other symbols include the game logo and the card patterns of spades, diamonds, hearts and clubs, the value of which will be determined by your stake. The most valuable symbol of all is the scatter – the game logo, with a top prize of £25K and that’s just for five anywhere in view. Prizes of £300 to £1K are triggered on the dancing women while pays of up to £250 are available via the card patterns. 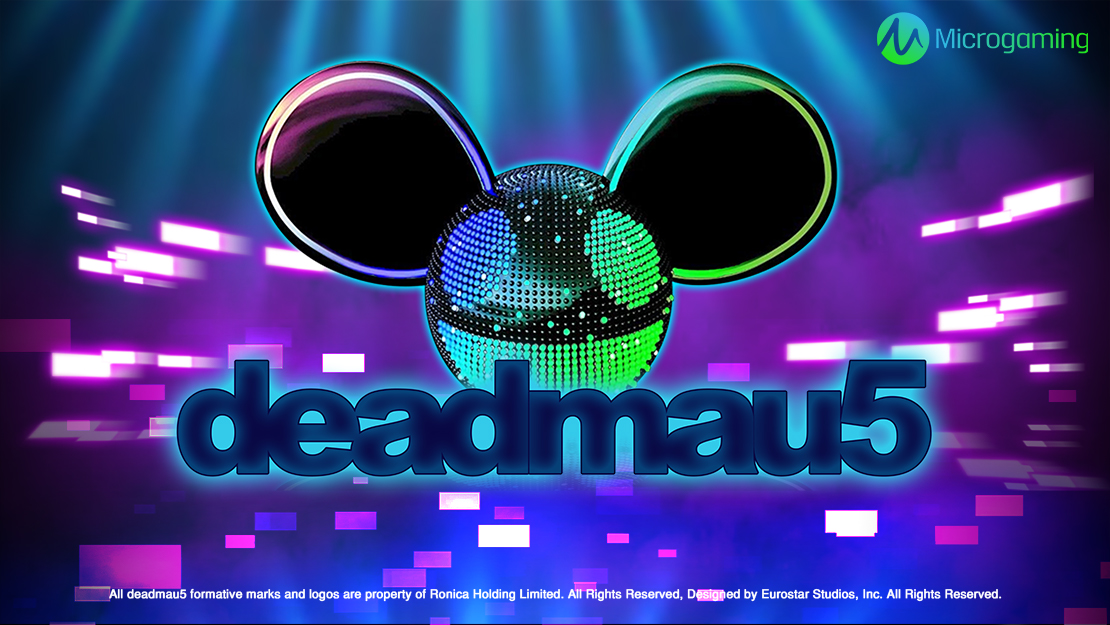 Wild symbols are digitally enhanced versions of the scatter and hold no monetary value. However, they do appear stacked on all reels to help achieve even more winning combinations. In fact, there are more than 40 wilds across reels 3, 4 and 5 to boost your winnings, so much so in fact, they can help achieve that top prize of 2,100x!

Drop the wild is a randomly triggered bonus that will see reels 2, 3 or 4 – or possibly all three turn wild with a guaranteed win! Three, four or five scatters will trigger 15, 20 or 25 free spins, but there’s still more to come! Rolling reels (cascading symbols) can pave the way for multiple wins and should you land wins during the free spins feature, this rolling reel element will drop multipliers of up to 10x on your wins!

Do you need to be a lover of dance music to enjoy Deadmau5? No. But just in case you really don’t like the audio, Microgaming have installed a mute button. The graphics are crisp and the features are immersive, but just don’t expect those wilds to appear too often, because they won’t! And the same can be said for the free spins.

When wins are generated, the symbols that fall as part of that win will vanish in a digital portal and make way for new ones, but unless you’re seeing this via the free spins, you won’t benefit from any additional multipliers. Land a win via the wilds on reel 3 and those wilds will keep returning for as long as you keep winning.

Despite the 243 ways to win reel engine, wins are few and far between, which means you’ll need to look after your bankroll unless you can sustain loss after loss. When the free games eventually surface, you can expect great things, whether you bet big or bet small.

When was the Deadmau5 slot released?

What is the RTP of the Deadmau5 slot game?

Deadmau5 is a music-themed slot.

Deadmau5 is a mobile-optimised slot.

What is the variance of the Deadmau5 slot machine?

Deadmau5 is a high variance slot game. High volatility slot game pay out less often on average but the chance to hit big wins in a short time span is higher.

Deadmau5 offers a free spins feature bonus plus rolling reels and multipliers of up to 10x during the free games feature. One win will lead to additional chances to win courtesy of rolling reels.

Deadmau5 delivers a maximum win of £25K and there are 243 win ways to land this on! Big wins are generated via scatter symbols and wild multipliers during the free games feature.

Is there anything else that I should know about the Deadmau5 slot?

The Autoplay is an option for players who love a more relaxed style of play but there are no options for turbo spins.

Play’N Go have a series of music-themed slots, all created in collaboration with real bands from around the world and the most famous being Helloween. Featuring snippets of videos from the German band Helloween, this 5-reel slot offers a series of wild bonus features focusing around the Keeper of the Seven Keys, which just happens to be a four-part album by the band.