Are you in the mood for dancing? The Disco Danny slot from NetEnt is here!

This is definitely a retro take – not one for the modern EDM clubbers, but a celebration of the Golden Age of Disco in the 1970s, when glitter went mainstream, and heterosexual men were briefly allowed to wear clothes that weren’t blue or black.

What a time it was!

The game is retro too, with a 3 by 3 grid, and like lots of these games, it’s one aimed at people who like to gamble: the gameplay is simple, there’s a high volatility rating and a potentially big top prize.

This has got a four-on-the-floor beat that really kicks, but should you get your dancing pants on for it? 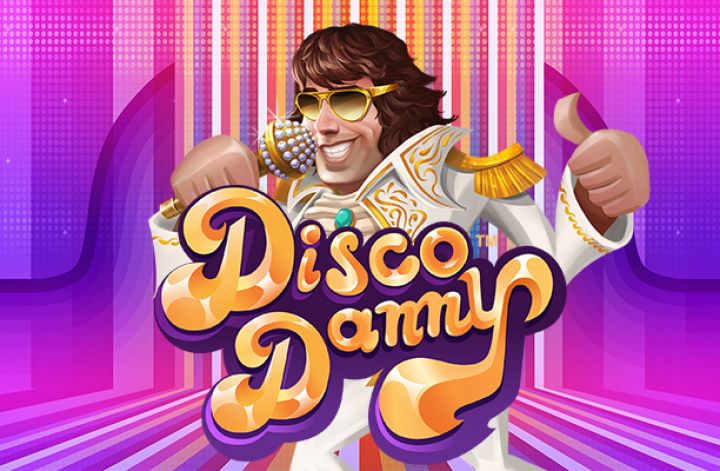 Three-reel games need to be simple to work. This is the case here.

The controls are the usual NetEnt strip centred on a control panel of spin button flanked by auto and turbo options. Betting is controlled with a list, from which you pick your amount. An information button opens the pay table, and you’ll find other menus behind the three-line symbol.

The pay table awards wins for any combination for bar symbols, of which there are three, and then we have high paying symbols: 7s, roller skates, Disco King 1 and the dressed-up Disco King.

This is a simple but effective game that is very true to its retro styling and game mechanics. Three-reel games have had a resurgence of late. We think it’s because they play well on portrait-orientation mobile screens.

Disco Danny delivers very well in that sense, with big clear graphics and lots of space on the reels.

The game mechanics are pretty simple, with a bonus game of free spins delivered via scatters. There’s not much in the way of extras in the base game.

That’s not a problem though and is entirely appropriate for this sort of game.

The graphics are great and well suited to the disco era. And the soundtrack lives up to the game’s name too.

If you want something with a bit more depth and sophistication then check out some five-reel games, but for simple hard-hitting games, it’s really good, with decent stats, including a very nice 3,000-times stake top prize on a very fair RTP for a high volatility game.

If you don’t like disco beats you’ll have to mute the sound, but otherwise, any three-reel fan should definitely check it out.