Gods are always fighting! That’s what some ancient mythologies tell us.

You’d think that with all that wisdom and power, gods might get along better and do cool stuff to make everything better.

But that’s dull, apparently. So we have the gods facing off in a four-way showdown here, courtesy of Play n GO, the slots monsters.

In fact, Play n GO have brought together gods from throughout history to have a fight!

The Divine Showdown slot game’s a straight-forward five-by-three in the set-up. But it is highly volatile. And it is rich in bonus features.

There seems to be a never-ending thirst for ancient history among online video slots players, so you can expect to see more games like this for the foreseeable future.

This Divine Showdown slot game came out at the end of 2019, and it’s been a decent success, if not a massive hit in the UK market.

Should you give your holy hand grenades a dusting down and choose your god for the showdown?

Let’s have a closer look.

When was the Divine Showdown slot released?

The winter of 2019 was when Divine Showdown was released by Play n’ Go.

What is the Divine Showdown RTP?

Divine Showdown RTP is 96.51%. RTP stands for the staked amount that the casino will return to the player in the long run and in this case it’s £96.51 out of £100 invested.

The theme of Divine Showdown is a mixture of several mythologies. There are several mighty gods including the Chinese Wukong god, Thor the Norse god, the Egyptian Anubis, and Athena from Greek mythology.

Play n’ Go created Divine Showdown to be playable on all devices including smartphones.

What is the Divine Showdown variance?

This slot is a high variance slot machine. This means that it comes with a lot of risks, especially if you are trying to get to those big wins.

The max hit goes up to x5,000 the total bet. The betting scale starts at a minimum of 20p per spin which will be well-suited for low rollers. The highest bet is £100 per spin.

Free Spins Battle is the main Bonus of Divine Showdown. This is an exciting bonus where you get a certain god to fight the other with three lives granted. Win the battles and gain multipliers and bigger wins. There are also two other features active in the base game as well. These include wild reels, random wild symbols, synchronized reels, and god symbols transforming into the most valuable Thor icon.

Divine Showdown doesn’t feature any jackpots. But the max win you can hit is x5,000 on a single spin.

Is there anything else that I should know about the Divine Showdown slot?

Once you start the Free Spins Bonus, the Gods will appear on the screen fighting each other which is a greatly executed and fun animation by Play n’ Go.

If you like mythology-themed slot machines like Divine Showdown, you may as well check the Age of Gods progressive jackpot slot by Playtech or the popular Thunderstruck II by Microgaming.

Play’n GO are, according to our favoured industry audit site, the third most popular and visible game developer in the UK market.

The company is, like so many of the companies making a noise in the world of slot games, Swedish. They’re far from limited to the icy north though and have licences to operate in 15 European jurisdictions, including – good news for you – the UK.

Their games are popular and highly visible. Their most popular titles are probably in the Rich Wilde series. The Book of the Dead episode of this guy’s archaeological adventures is a huge favourite in free-spins giveaways.

The company’s roots take it back to the 90s, but it only set up as an independent in 2005. It now has well over 100 titles on the go, and is a regular award recipient.

The company is well-liked by gamers (and by its employees according to at least one award) and by the industry press. They release regularly, and you should expect to see their titles

The predicted theoretical return to player hers is 94.5%. This is quite low, as most of the games these days are up around 96%. However, this is the price one pays for risking it all for higher prizes, which are indicated by the game’s rating as a “high” volatility game. Games with high volatility are more likely to pay out bigger prizes, but the prizes are likely to come less often. Both these measures are long term measures of a game’s theoretical performance, and they will not necessarily reflect your experience with the game. Use them as guides only.

The game is set up in a standard five by three grid, with 20 pay lines, and you can play Divine Showdown on any device that supports JavaScript and HTML5. 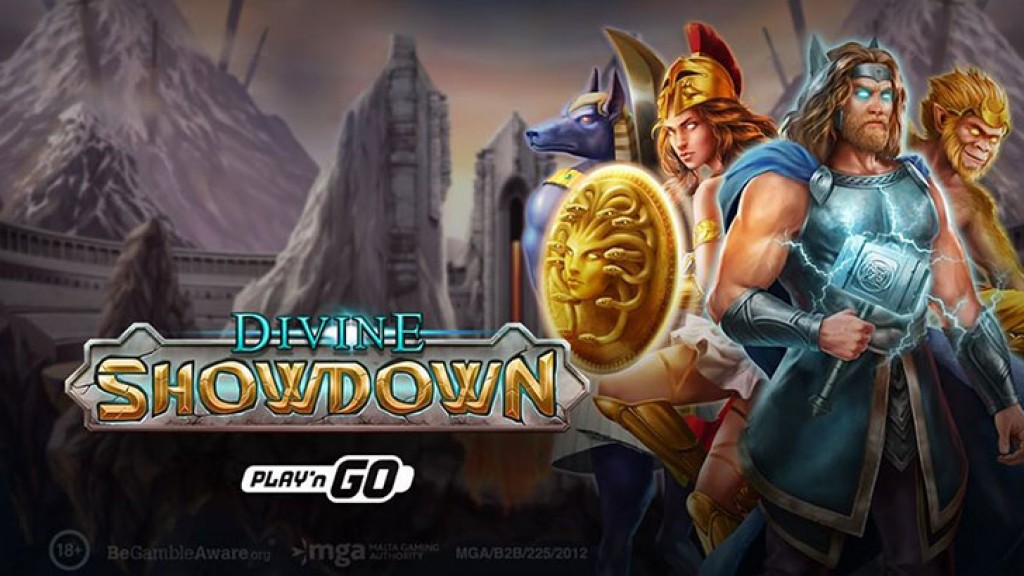 At the left is the information button, which you should press to open up the paytable and game information. To the right of that is a Balance window. You then set your bet on a sliding scale, with the amount showing up in a window just to the left of the spin button, which neighbours the auto-play and turbo-play option.

Look for further information and controls in the game frame.

The paytable shows you this:

Card suits are the lowest payers, paying maximums of 1-times stake to 2.5-times stake for sets of five.

Anubis, from Egypt, pays 8-times for a full house.

Athena, of Greek fame, is worth 12-times stake for a set of five.

Thor, the Norse god, pays 16-times stake for a set of five.

The Wild completes the best possible wins and is worth 20-times stake for a full set.

Multipliers are available in the main game and these are indicated by a multiplier meter over the reels. These are triggered at random and can boost your wins by multipliers of 2 to 10-times.

The gods all have superpowers. These are used randomly to award a respin with:

Free spins are triggered via a scatter, and launches the Divine Showdown, to find out who’s the biggest god of all.

Pick one to take your side in the free spins round. You enter the rounds with three lives and before each spin, a second reel decides whether you get a spin or a fight. If you lose the fight you lose a life: either way, your god’s feature is played on the next spin. There’s a random multiplier on free spins wins.

Bet up to £100 and you could be walking away with £500,000 if you hit all the bonuses and take the top possible prize on Divine Showdown. There’s a risk though because there’s a slightly lower RTP than usual and this is a highly volatile game.

It’s highly entertaining though. The graphics are great and bonus features are delivered throughout the game, in the base game, and in a sophisticated free spins round. If you like your games to have a video gaming element to them, then this is definitely a game that you should check out.

Divine Showdown slot is an engaging and evolving game that is definitely worth checking out in the gaming heaven of your choice.