Time for some monkey business with Playtech, the world’s largest gaming software supplier.

Epic Ape slot is a six-reel game, which already makes it stand out from the crowd, themed around the great apes of Africa – now tragically at risk, so please donate to a conservation charity if you win big on this machine.

This is a ways-to-win game, with more than 4,000 pay-lines, and a lot of visual interest. It also delivers really high-quality bonus games that could deliver some very big wins.

It certainly has a lot of interest and variety for players, but should you venture out into the wilds and engage with these beautiful beasts?

Let’s have a closer look!

When was the Epic Ape slot released?

Epic Ape slot was released back in 2017 when providers started bringing us more slots with hundreds of ways to win.

What is the Epic Ape RTP?

Playtech created Epic Ape slot with an average RTP of 95.96% which is pretty standard for these kinds of slots.

Epic Ape is a slot with 5 reels, 4 rows, and no standard pay lines. Instead, there are as many as 4,096 ways to win with wins formed by matching symbols on adjacent reels from left to right.

The theme of Epic Ape is nature with the slot set in the big jungle with the magnificent Ape as its main character.

Epic Ape is compatible with all mobile devices such as Androids or iPhones.

What is the Epic Ape variance?

Most slots with thousands of ways to win are high variant games and this goes for Epic Ape as well. The big wins are hiding behind the reels, but it will take patience to get them.

The players can enjoy Epic Ape slot from 20p per spin up to the max of £250 which will suit the high-rollers. The top win per spin reaches x300 the total stake in Epic Ape.

Epic Ape comes with a Free Spins Bonus where you can win 8, 15, 25, or as much as 100 free spins per round. The Bonus can also be re-triggered awarding even more free spins. Keep an eye on the wild in the Bonus as it comes with x2, x3, or x5 multipliers.

Epic Ape doesn’t feature any jackpots but if you want to take a shot at progressive jackpots Mega Moolah can always be your choice.

Is there anything else that I should know about the Epic Ape slot?

The Epic Ape Free Spins Bonus round can be re-triggered infinitely!

If you enjoy slots with nature and animals, there are plenty of others you can check. Some of the most popular nature-themed slots include Raging Rhino by WMS, Buffalo Rising, or the quirky Return on Kong Megaways by Blueprint Gaming.

Playtech call themselves the biggest supplier of gaming software in the world. By any measure they are a large company: they have 5,000 employees and offices in 17 countries. The company holds 140 global licensees and operates in 20 regulated jurisdictions.

This isn’t all about slots though. Epic Ape produce games, but they also produce a suite of products for casino sites. These tools help the casino sites you use to run and to run profitably. When a company makes both games and the software framework on which the games sit, then you can bet that those games are presented well. For example, William Hill, a massive UK casino site uses Playtech software, and more than 50% of their games are from the company.

There’s nothing underhand about this, and it happens in almost every industry sector.

So let’s have a look at those games: the company has more than 500 games on the UK market, running in 220 casinos.

And that just takes us to the 60th rated game in the UK ratings of our preferred industry audit site.

The Epic Ape slot game was released in December 2017, when its theoretical return to player of 95.96% was just about on the industry average of around 96%, or a house edge of 4%. This measure is the expected outcome of the game’s entire lifespan and you should not expect it to predict how your interaction with the machine. You may lose more, you may win a fortune: certainly, you can win a top prize of 75,000 coins.

We’ve mentioned the six reels and four rows, that give us 24 symbols, and there are 4,096 potential ways to win.

This game can be played on JavaScript and HTML5 enabled and equipped devices. 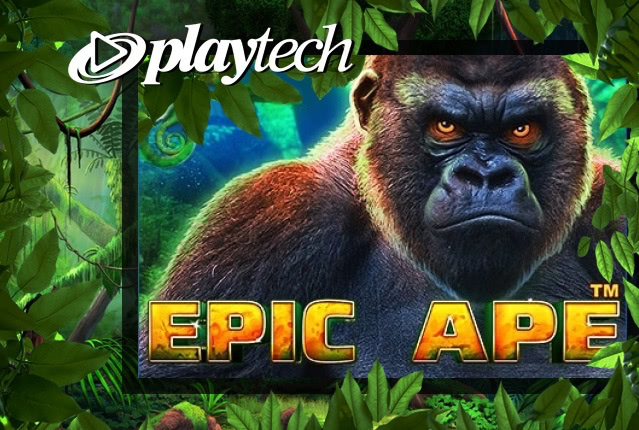 Playtech know how to put a slot together, and this game plays easily and beautifully.

A standard control panel has these options:

At the left is an “info” button. To the right of that is the coin value selector, with plus and minus buttons. That sets up the total bet to the right. In the centre information and wins pop up. To the right of that are the Autoplay feature and the turbo mode setting, with the spin button completing the panel.

The paytable starts with card suits.

Above those are animals.

Frogs and chameleons pay from 10 to 200-times stake for sets of between two and six.

Leopards and black panthers pay from 15 to 250-times stake.

The gorilla, which is a stacking symbol, pays from 40 for a pair to 300-times stake for a full-house of six.

There is a scatter and a wild, a diamond.

In the base game, the diamond wild substitutes for all symbols except for the free games scatter. It does not appear on the first reel.

The free games scatter can appear on reels 3 to 6. It can trigger up to 100 free spins.

During the free spins round the wild carried multipliers of 2, 3, or 5-times on wins.

Free spins can be retriggered during the free spins round.

There is no limit to the number of retriggers.

This Epic Ape slot is an excellent game. From the moment Epic Ape slot loads up you know you’re in for a great experience. The backdrop, colour scheme, and design are really top quality.

Once you start spinning – via an easy-to-use control panel – you’ll see even more quality in design and animation.

There’s an awful lot of depth to the gameplay too, with features popping out of the main game, and a fantastic free spins round. One hundred free spins is hugely generous, and the fact that you could trigger these, again and again, is really a mouth-watering opportunity.

Playtech offers a great experience with all their games. They are a quality developer, and Epic Ape was a great addition to their catalogue. It delivers potentially big wins, with gameplay that is involving and engaging even when the wins aren’t hitting.

Perhaps the best verdict on this game comes from this game’s continuing popularity some two years after this game was released.