Fire Joker slot shows that Play’n GO don’t care about your sleep! That joker symbol is the stuff of nightmares. But perhaps we’re just too sensitive.

Horrific looking grins aside, this game, which has been around since June 2016, is a throw-back to a simpler time that shows players are keen to go back to the future for the simplicity and cut-down style that works on the smaller screens on the mobile era. This game, from one of the world’s biggest game companies, even goes so far as to trim things down to three reels.

Everything about this game is a reminder of games gone by, but the wins can be big, with an 80,000 coin top prize, and plenty of gameplay interest too.

Should you see if you can get a laugh out of this joker? Let’s deal the cards and have a look at what raises a smile.

Fire Joker is a Play n’ Go slot machine packed with action even though is considered a classic slot machine.

When was the Fire Joker slot released?

Fire Joker slot was released back in June 2016 but it is still popular in online casinos.

What is the Fire Joker RTP?

Fire Joker is a typical classic slot machine featuring 3 reels, 3 rows, and 5 active pay lines. 3 matching symbols horizontally or vertically are needed to form a win and this is when things explode in this classic slot.

Fire Joker is available for play on all devices including all smartphones.

What is the Fire Joker variance?

Fire Joker slot can be put in the category of medium variance slot machines with decent wins.

This slot is a perfect game for low-rollers as the minimum bet is just 5p per spin. The maximum bet goes up to £100 per single spin. Huge prizes going up to x800 the stake are possible.

There is no typical Free Spins bonus in the Fire Joker slot but there are as many as three other features. Fire Joker features stacked symbols, re-spins on non-winning spins, and Wheel of Fire that can award x2 to x10 multipliers to your wins.

There is no jackpot in the Fire Joker slot. However, the max win of x800 the total stake is quite big for a classic slot machine with 3 reels and 5 pay lines.

Is there anything else that I should know about the Fire Joker slot?

This classic fiery slot is an excellent game and Wheel of Fire is where you have the best chance to win up to x800 the total stake!

If you are a classic slot enthusiast then you can also check Play n’ Go’s Mystery Joker or 5x Magic slots. Also, brand new NetEnt’s Grand Spinn slot is a great choice of a classic slot with a few modern twists.

As we write this in February 2019, Fire Joker slot was something of a hit, and appeared in the lobby of no fewer than 50 UK casinos, putting it on the front page and in the faces of players, who are obviously clicking through and playing.

When they do they’ll be rewarded with a theoretical return to player (RTP) of 96.15%, which is another way of saying that the house edge over the long run is 3.85%. The game is of medium volatility, a way of measuring how often the game pays out and the size of those payouts.

The top prize on Fire Joker slot is 80,000 coins, which isn’t one of the biggest we’ve seen, but with your stakes boosted towards the top end of the betting scale that runs from 0.05 coins to 100 coins (5p to £100 in UK cash), that’s an awful lot of money. Make sure you check coin values and any limits on pay-outs at the site you’re playing at before you play.

There are just five pay-lines in this cut-down game of three reels and three rows that you can play on all platforms if you have Flash, JavaScript, and HTML5. 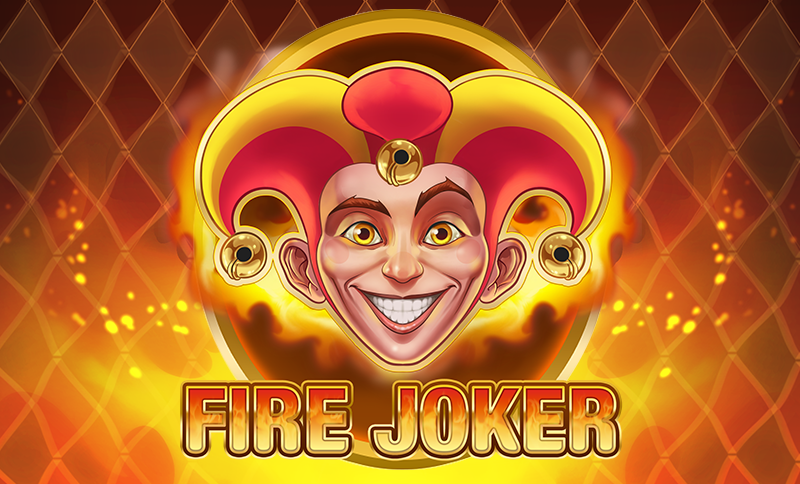 Intent on their fire theme, the game is presented as an orangey/yellow glow on a dark background that we find kind of sinister, and you absolutely should not.

Simplicity is the keynote, and that applies to the controls too, which run along the bottom of the screen in a standard style.

There’s a spin button to the right – yellow, of course – and an autoplay button on the left. In between lies a sliding scale of bet amounts. Click on the button above the autoplay function to read the pay table, and to the right of that is a win and information window.

A lot of the controls – settings, sound, and help – and the information is set in the game frame on desktops or behind menus in the mobile version

The game is nice to look at with music that is far from offensive, and very easy to operate.

The pay-table is also simple, with just sets of three paying out until you get involved in the bonus games.

The joker is also a wild symbol and subs in for all other symbols.

The pay-lines are easy to read, as they’re really the only ways to get across these reels.

You’ll have noticed that pay table is missing one of our usual favourites, a scatter symbol that triggers a bonus game. While Fire Joker remains true to its apparent mission statement of keeping everything simple, it does have bonus games in the shape of a respins feature and a multiplier wheel.

Respins – the Respin of Fire (cute name, guys) are triggered when you have two reels filled with the same symbol.

The Wheel of Multipliers is triggered when you do fill the whole screen with the same symbol. This opens up a coloured wheel – red and yellow you’ll be unsurprised to hear – that contains multipliers from 2-times to 10-times your prize.

Relatively simple then, but by no means unrewarding, with a maximum prize of 800-times bet on those multipliers promising some very rewarding sessions.

We have nothing but praise for Fire Joker, a game we actually enjoyed spending time with for this review – this despite the hair-raising colour scheme and that bloody awful grin on the joker.

Making things simple has worked really well in this case, and it delivers not just a good, simple game, but also one that has a bit of depth to its gameplay and generosity that is likely to encourage players to stick around for the long run.

Designed with mobile screens in mind, the three-reel set up works well, and the theme has been ruthlessly pursued with an unrelenting dedication to the colours red, yellow, and orange, and very nice, simple control panels that work really well, even if your tapping fingers could do with losing a little weight!

The pay-lines are fewer, yes, but it’s easy to understand, and there’s no reason why you won’t hit some big wins in this game.

The bonuses don’t have the sophistication of some games you’ll see these days. Or to put it another way, the bonuses aren’t unnecessarily complicated and deliver a great, simple boost in gameplay that actually offers a quick break from the main game and the chance to win some decent jackpot prizes.

Looking and sounding like a million dollars – we almost never like game music, so this is a rare exception – Fire Joker slot is a game that you should pull up a chair beside and spend a few hours getting warm at your favourite casino site now!