That was the best fight!

And here it is, via a million films, books, graphic novels, and video games, on a slot! And it’s not alone either, Gladiator-linked games (some official, this one not) are to be found all over the place.

This Game of Gladiators slot game, from June 2019, gives a film look and feel to the murderous action on its standard game set-up.

There’s a high staking limit that could see you win up to 500,000, which is enough to buy your freedom in most societies.

Play’n Go are a big trusted company and can usually be relied upon to deliver with the production values, but have they delivered a high-quality enough game here to tempt you into the arena?

What game provider developed the Game of Gladiators slot?

When was the Game of Gladiators slot released?

Game of Gladiators was released in the summer of 2019.

What is the Game of Gladiators RTP?

Game of Gladiators RTP is 96.42% which is slightly above the industry standard and pretty decent for a high-variance slot machine.

Game of Gladiators slot features a standard layout. There are 5 reels, 3 rows, and 20 fixed pay lines. Winning combinations are formed with aligning matching symbols on active pay lines from the leftmost reel to the right.

This slot comes with a warrior theme. Gladiators are the centre of this slot which will provide plenty of glorious gladiator battles in the game.

Game of Gladiators slot can be played on any kind of smartphone device.

What is the Game of Gladiators variance?

This slot comes with high variance. This means that smaller wins are more frequent while bigger wins will be a bit harder to catch.

The minimum to bet on Game of Gladiators is 20p per spin. The bet can be increased up to the max of £100 per spin. Wins up to x5,000 the total stake are possible.

Game of Gladiators is packed with features. The free spins bonus is the main feature awarding two different rounds. Each comes with an unlimited number of spins. The Bonus lasts as long as your warrior keeps winning in a battle with the other warrior. There are also multiplier random bonuses to expect in the base game.

There is no jackpot in the Game of Gladiators slot machine but the max win reaches x5,000 the total stake.

Is there anything else that I should know about the Game of Gladiators slot?

In the base game, you can expect bonus payouts, random wilds, duplicating reels, re-spins, as well as expanding wilds. All these can greatly increase your wins and make the base game pretty exciting.

Slots with a theme of gladiators and glorious battles are numerous. Some of the slots with this theme worth checking out are 300 Shields Extreme slot with increasing multipliers in the Bonus round or Yggdrasil’s Champions of Rome slot machine.

Play n Go – The Developers of Game of Gladiators Slot

Play’n Go are one of a select group of companies who we routinely refer to as “household names” or “gaming giants”. If you’ve been anywhere near online video slots you’ve encountered this company, whether you know it or not.

Play’n Go have all the right badges, they are licensed in the UK by the UK Gambling Commission, so you can trust them.

They have bases in the country where they were founded, Sweden, and around the world, including in Malta.

They also produce behind-the-scenes systems, so you can visit whole casinos run by Play’n Go gear.

Their games cover every conceivable style, type, and genre of the online video slot. They have more than 150 games listed in the UK market at the moment (July 2019), including the number two title, Rich Wilde and the Book of Dead.

The Game of Gladiators slot machine was released in June 2019 and can be played on any desktop, mobile, or tablet that supports JavaScript and HTML5.

The main atypical feature here is the game’s high volatility. Volatility is a measure of how often a game pays out prizes and how large those prizes are. Low volatility games pay out small prizes more often, and high volatility prizes do the opposite.

These measures are quite broad, but you should enjoy high volatility games if you’re more of a gambler. 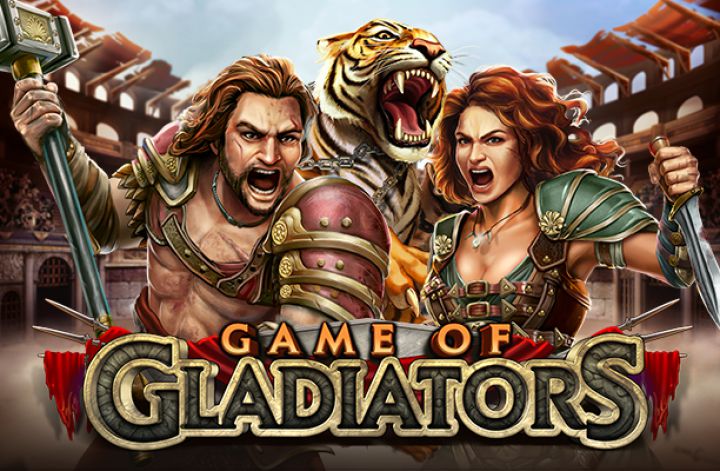 The game plays in a very familiar way.

The spin button is at the bottom right, with a smaller Autospin button next to it.

And that’s about it! Look for further controls and settings in the game frame.

At the top of the paytable, there is a Tiger. This symbol is the wild, subbing in for all symbols except scatters, and paying out 25-times your stake for a full-house of five.

And there ends your Latin lesson!

If the devil is in the detail, then the beauty is in the bonuses. And there’s a lot to get stuck into here.

The base game has five features that trigger randomly:

The Enter the Arena feature is triggered by scatters (portcullis symbols). In this round, you pick a champion who replaces the scatter during the free spins that follow. Premium symbols in winning combinations boost a Battle Meter above the reels. Scatters destroy gladiators and put a multiplier on the Battle Prize up to 3x.

If all of the gladiator groups are destroyed or the battle meter is filled the round ends.

Your champion also offers a prize: either a retrigger of the spins or a cash prize.

This Game of Gladiators slot game looks great and is true to its theme, which is delivered with depth and intelligence.

You know this company, and you know that they deliver a decent experience. Excellent stats for the player are also tempting, and if you like the high-risk game then this is definitely one for you.

The only gripe we have is that the sophistication in the gameplay might just spill over into being too complex for some tastes. It’s been hard to describe all the bonuses here, so be sure that you’re on top of them before you play.

But we’d oil ourselves up and pick up a sword to get in the arena for Game of Gladiators!