Imagine a volcano erupting with gold! That isn’t so far from the truth in some ways. Lots of precious metals are “forged” by the massive heat underneath the crust of the earth, and it’s that heat escaping from the ground that delivers volcanos, perhaps the most dramatic – and we think the coolest – natural phenomenon in the world. (Though we do not like casualties!)

Gold Volcano slot takes this obvious metaphor and turns it into a very innovative game.

From the start, when dramatic drums start beating, and musical stabs assail you, you know you’re in for something worth your time!

There are a load of features to this game, which takes its theme and runs with it, celebrating the pressure that forms gems in one feature, crystallisation in another. There are three dormant volcano features, and an eruption triggers massive wins by really opening up the reels.

Don’t worry, all of those translate into standard slot terms – you don’t need a degree in geology or volcanology to play this game, which looks as good as it sounds and, in our view, is one the stand-out releases of summer 2020.

What game provider is behind Gold Volcano?

This is a Play n GO title. And they’ve hit a winner with this title, which is their second most popular at the moment, sandwiched in between two of the …of Dead titles that have spawned a massive run of hits, most notably Rich Wilde and the Book of Dead, the UK’s fourth favourite online slot. You’ll recognise many of this company’s 200+ slots, as they’re highly visible, and they cover every genre, from the classic slot feel of Fire Joker, to highly developed character games like The Sword and the Grail.

When was Gold Volcano slot released?

This game was released on 16th July, 2020, so it’s brand new, and has done amazingly well from the off.

What is the Gold Volcano RTP?

The RTP of this game is 94.2%. This is a little low, but not dramatically so. Most games clock in at around 96% at the moment. The theoretical return to player is an audited measure, but you should remember that it is theoretical, based on running simulations of the game over hundreds of millions of spins. It is not a predictor of how your game will go.

How many reels and pay lines does Gold Volcano have?

This game has a changing reel set. At the base of the volcano are eight symbols, the highest of which rises to six symbols high. The reels can expand to a giant square in the Eruption feature.

What theme is used in Gold Volcano slot?

The theme of gold volcanos is volcanos, geology, landscape, the natural world. It has computer graphics and traditional classic slot symbols.

Can I play Gold Volcano on mobile?

You can play Gold Volcano on any device that supports JavaScript and HTML5.

What is the Gold Volcano variance?

You can bet from 0.2 coins to 100 coins. This should be 20p to £100 in UK sites, but check that you know the coin values and financial settings on the game you are playing.

Does Gold Volcano have free spins and bonus rounds?

Yes, the Eruption feature is a free spins round. There is an expanded reel set during Gold Volcano free spins.

Is there anything else I should know about Gold Volcano slot? 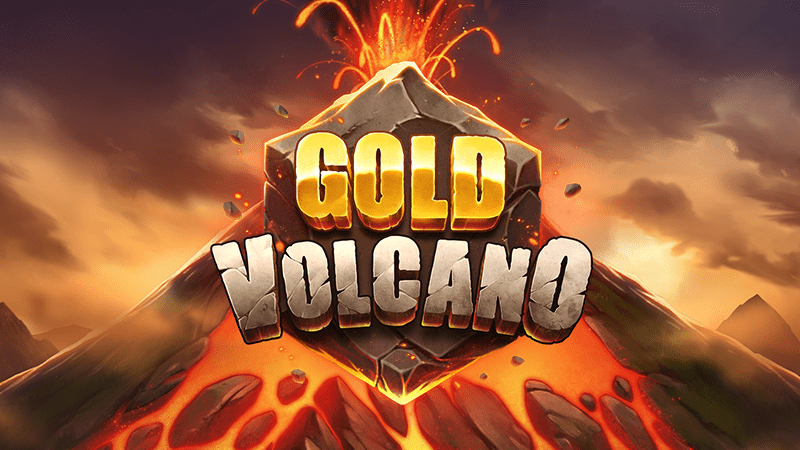 Despite the very unusual screen set-up of Gold Volcano it plays just like a standard slot. Just click the spin button at the bottom right to send the symbols erupting up into the reels. The auto spin feature to the right of this is very sophisticated.

Betting is set via a sliding scale along the centre, and you open the pay table with information button at the bottom left.

Bonuses erupt all over in this game.

Wins are delivered via clusters, and with a cascade feature that drops in new symbols after each prize is awarded retriggering until the wins stop.

There are three random second-chance features on losses. A rumble shakes up the grid to deliver a potential new win with an extra scatter thrown on the reel. Lava causes an eruption with lava changing the symbols it touches. Excavate adds extra wilds to the reels.

The Pressure feature adds wilds, some with multipliers, at random.

Crystallisation is a meter feature. It collects scatters in sets of three. It turns symbols to gold.

An eruption is triggered by the pressure of six consecutive cascade wins. The eruption opens up the reels to a full square 8 by 8 grid. You have 5 free spins, but one more can be added each time there’s a set of 6 cascading wins.

The pay table opens with four coloured card symbols, then there are three gems (purple, red, and green) with the gold symbol (which can be created from the scatter meter too) sitting at the top. The top prize is 10,000 times stake.

This game has a million upsides and one downside. The downside is Play’n GO’s consistently lower-than-average RTP.

That’s not such a big deal, and it obviously doesn’t bother players who keep logging on to spin their games.

And you can see why.

Gold Volcano is novel, innovative, and super smart. It looks great, has compelling narratives, and really engaging game play. We’ve had to cut down the usual coverage we give to some parts of our review here just to fit all the bonus features in.

A really impressive game that we suspect will inspire a load of copy cats, you should definitely scale this mountain and wait for an eruption.