Casanova hey! The Venetian adventurer from the 18th century who, through a series of tall tales told with varying degrees of smuttiness over the ages, has become a byword for promiscuity and dashing, adventuress lifestyles!

This sort of stuff is catnip in the slots world (with a massive audience of young men) so I’m amazed we don’t see more of this theme.

Here, our Italian danger is let loose on a typical reel set with his main extras coming in the form of a bonus spin, expanding wilds, and a nice looking top prize of up to 10,000 coins.

The Grand Casanova slot game is set in Venice by night, with our hero and a series of beautiful women making up the majority of the symbol set.

This game has some lovely graphics and is as pretty as a picture, but should you join our boy Cass as he heads out on the party circuit?

What slots provider is behind Grand Casanova slot?

This game was made by Amatic Industries. Amatic are Austrian and have over 100 games on the UK market, where they’re rated as a top-100 provider by the audit site that we trust. This game is branded via Amanet, a division of the company. Alongside slots, they’ve made some casino games too. The company doesn’t have any major hits, but its current top titles with UK players are Hottest Fruits 20, Book of Aztec, Kings Crown, this title, and Hot Fruits Deluxe. There’s a good mix of genres and styles in their games, and they love designing eye-catching symbol sets.

When was Grand Casanova slot released?

What is the Grand Casanova RTP?

The theoretical return to player of Grand Casanova isn’t published.

How many reels and pay lines does Grand Casanova have?

This game plays on a standard reel set of five reels and three rows, meaning there are 15 symbols in play. The game has 20 pay lines – again, that’s very standard.

What theme is used in Grand Casanova slot?

This game is themed on romance, adventure, the 18th century, historic characters, and swashbuckling! The graphics are drawn and realistic.

Can I play Grand Casanova slot on mobile?

You can play Grand Casanova slot on any device that supports JavaScript and HTML5.

What is the Grand Casanova variance?

The variance and volatility and hit rate for Grand Casanova have not been published. We have assumed – looking at the other features of the game – that this game offers very comparable stats to the industry average.

What is the minimum bet and the maximum win in Grand Casanova slot?

You can bet from 20 to 100 coins on Grand Canary and the top pay out could be 100 times you stake, so a possible maximum of 10,000 coins. Make sure you check all the financials on the game you’re playing and make safety your first consideration.

Does Grand Casanova have free spins and bonus rounds?

Yes, there is a free spin round, called bonus spins here. Wilds become staking in the bonus spins/free spins round.

Is there anything else I should know about Grand Casanova slot?

There are no built-in stops on the autoplay function so you need to be aware of what’s going on. 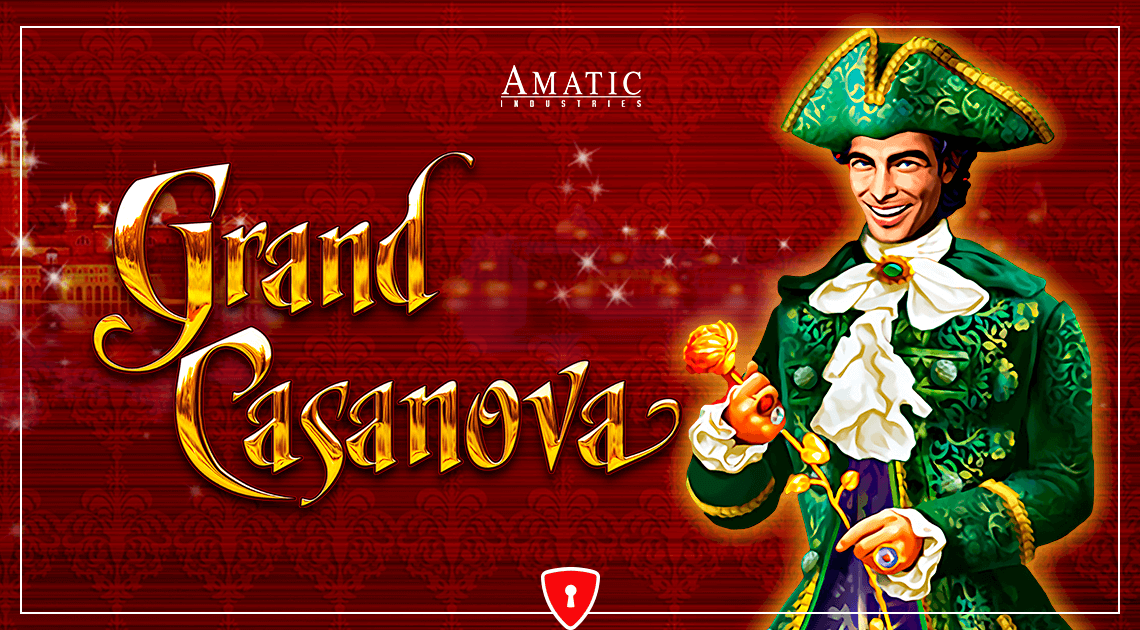 This game is easy to play with a very standard control panel set up.

A panel runs along the bottom of the screen with, from left to right, your balance, the pay line selector (1 to 20), and your bet amount from a minimum of 20 (1 coin per pay line). Then there is a max bet button, the autoplay function (press again to stop), and the spin button, which is flanked by the bet plus and minus buttons.

The settings, mute button, and help functions (including the pay table) run up the right-hand side of the screen.

The pay table has many symbols, but many duplicate values.

In paid versions, there is a game history button.

We weren’t all that familiar with Amatic Industry’s games, but if this game is any indication then they are a company that is worth keeping an eye on.

Grand Casanova is not a world-changing game of awe-inspiring new features, but it is a well thought out and very nicely designed game that does what it sets out to do very well.

The features are more than decent though: a good free spins round, with stacking wilds. It might be nice to see a bit more variety, but these are the standard feature set that players expect.

The game controls and set-up are really nicely done: very simple and easy to understand with good information that there’s no misunderstanding.

Perhaps the greatest strength of this game is its original (to us) theme and beautiful reel and symbol design. Perhaps the Casanova story is more well-known or has more cultural relevance in Alpine Europe but the look and feel of this game are a breath of fresh air here in the UK. It’s nice to have a historical game that isn’t themed around violence too.

A good simple game with loads of charm and a hell of a lot of difference, we reckon Grand Casanova slot is worth checking out.