It was in the October of 2020 when Play N Go delivered us another slot masterpiece – the Helloween slot, which was unlike anything the slot spinning communities had ever laid eyes on before!

The theme itself was two themes rolled into one – Halloween, which was hardly surprising given that it was an October release and rock music, and strangely enough, this slot game is actually based upon the German band of the same name!

Featuring songs from their pivotal album Keeper of the Seven Keys Part I and Part II, the award-winning Swedish software provider focused on this and came up with a series of bonus elements that could shake fans to the very core in terms of win potential!

The minimum bet is just 10p while the maximum is capped at £100 a spin. Each turn offers the ability to win on up to 10 win lines. Bets can be placed with ease via the pre-set value buttons on the control panel.

Altogether there are seven different wild symbols, all of which are easy to spot with being pumpkins. A golden ring, a mysterious shrouded figure, goblins, the holder of the keys and card values (royals) from 9 to A appear across the 5×3 reel engine and when three or more (aside from wilds which pay as part of any win), appear on consecutive reels starting from the leftmost reel, a win is generated based on the level of your bet. 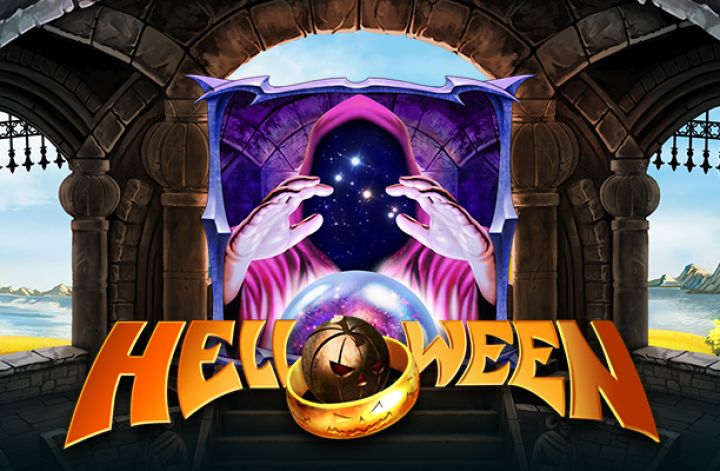 The key to the bonus feature literally is the key – three blue orb symbols with seven golden keys floating about each one will grant the free spins feature. Before your free games get underway, an accompanying wild feature will be chosen at random by the spinning of a pentagram and can include any of the following:

Should you be lucky enough to spin in three more scatters during your free games, you will re-trigger the feature and a spin of the pentagram is awarded again!

There is no limit to the number of free games one can trigger, making Helloween super exciting and potentially extremely rewarding!

Keep your eyes on the golden ring to the top of the reels because this can activate multipliers of 2x, 3x, 5x or 10x after any feature! Once complete, a video of the band concluding their performing on stage will appear to indicate the feature is over.

Whether you’re into rock music or not, Helloween is a thrilling title with a series of bonus features designed to excite. The combination of rock and horror works well only don’t expect those features to become available too often, as they like to make players work for the action!

You could be playing for considerable lengths of time before generating any sort of decent win or free spins, so looking after your bankroll is vital!

The free spins are fast, but the excitement is in the not knowing – will you get a multiplier to boost your overall winnings or will you get more free games and wilds? You’ll find out when you start playing!

Q: When was the Helloween slot released?

Q: What is the RTP of the Helloween slot game?

Q: What theme is used in this slot?

A: Helloween is a Halloween and music-themed slot.

Q: Can I play this game on mobile?

A: Helloween is a mobile-optimised slot.

Q: What is the variance of the Helloween slot machine?

A: Helloween is a medium variance slot game and to give you an idea of how frequent this game pays, a high volatility slot game is designed to pay out less often on average but the chance to hit big wins in a short time span is higher.

Q: What is the minimum bet and the top prize?

Q: Are there any free spins and bonus rounds?

A: Helloween offers six different free spins features all of which are activated through the gathering of three key symbols.

Q: What other features does it come with?

A: Six different wild features available during the free spins and multipliers.

Q: Are there any jackpots?

Q: Is there anything else that I should know about the Helloween slot?

A: Scatter keys are also wild and can help complete wins when falling as part of a win line.

Q: If I like this game, what else should I look at?

A: Halloween by Microgaming, the online slot based on the original horror movie of the same name. Relive iconic scenes and watch as the characters fight to get away from the masked madman, Mike Myers in a series of bonus features. Turn your volume up to listen to the spinetingling soundtrack as you attempt to rob the reels of its big wins!