I love Sherlock Holmes. And everyone at the moment seems to love Yggdrasil, who churn out imaginative and entertaining hits as regularly and reliably as I miss deadlines.

This game puts Holmes firmly in the steampunk genre, with a retro-futurist feel to its animated and very stylish graphics.

The Holmes & the Stolen Stones slot game is also – true to Yggdrasil’s style – packed with sophisticated bonus features. It’s also a progressive jackpot game with five local jackpots: local jackpots are usually networked on a site rather than across numerous sites, so they can get big, but they don’t normally reach the enormous sums that a true networked progressive jackpot can reach.

Holmes will always be with us, and Yggdrasil have done a great job bringing him into the 21st century and into the slots world with this game.

Is it a mystery that you should investigate though?

Let’s have a look in this review!

What game provider developed the Holmes and the Stolen Stones slot?

Yggdrasil is the provider of Holmes and the Stolen Stones slot and this company is pretty popular thanks to its creative slots.

When was the Holmes and the Stolen Stones slot released?

This slot was released in 2015 and it features quite exciting features not to mention some jackpots.

What is the Holmes and the Stolen Stones RTP?

Holmes and the Stolen Stones has a bit higher return to player rate (RTP) and stands at 96.80%.

This slot has a standard reel structure. It features 5 reels, 3 rows, and 20 fixed pay lines. To hit a win you need at least 3 matching symbols on an active pay line starting from left to right.

Holmes and the Stolen Stones has a detective theme. It is inspired by the famous detective Sherlock Holmes. In the slot you will find Holmes, Watson, and other detective symbols such as magnifying glass or notebook.

Holmes and the Stolen Stones can be played across all devices including smartphones.

What is the Holmes and the Stolen Stones variance?

This slot has low to medium variance so plenty of smaller wins can be expected during the game.

You can start playing Holmes and the Stolen Stones slot from a minimum of 20p per spin. The top prize in this slot goes up to 10,000 coins.

Free Spins Bonus can be triggered with scatters or collecting diamond shard symbols in the ‘pick me’ bonus. The Bonus awards 10 free spins with a 3x multiplier applied to all the wins in the round. ‘Pick me’ bonus awards various cash prizes.

Holmes and the Stolen Stones has as many as five local progressive jackpots.

Is there anything else that I should know about the Holmes and the Stolen Stones slot?

Keep your fingers crossed to activate the Free Spins Bonus as this is where you can have a shot at winning progressive jackpots. Five shard symbols is all you need to hit one of the five jackpots in this game.

If you like detective-themed slot machines then you can also check Playtech’s Sherlock Mystery slot or Murder Mystery by the same provider.

Yggdrasil – The Developer of Holmes & the Stolen Stones Slot

Yggdrasil has an amazing story.  The company, who are Swedish by origin, but now very international, was only founded in 2013, but they’re already a gigantic name in the world of online video slots.

Their success lies in the quality of their products. Their games are different and cutting edge: they look different and almost always have unique or innovative game-play elements. With their name coming from Scandinavian folklore – Yggdrasil is the tree of life at the centre of the mythological universe of the Vikings – Yggdrasil has been heavy on games with a Norse or Viking theme.

Yggdrasil games are now everywhere and they win awards pretty much every year, including a shelf-full of EGR awards like the 2016 Slot Provider of the Year gong.

Their next release is due to be Temple Stacks Splitz. This game was released in September 2015.

The theoretical return to player of Holmes and the Stolen Stones is 96.8%. That means that over the life of the game it should return that proportion of the money it takes back to players. This is at the generous end of the current market average. Don’t get too excited by this though, this is a long-term measure and your experience of the game can vary a long way in either direction. The game’s “medium” volatility rating simply means you should expect to encounter wins about as often as you do in other games on the market.

The top single prize is 30,000 coins. Betting runs from 0.2 to 40 coins, which should be 20p to £40 but make sure you’re aware of all the financial settings on the game you’re actually playing.

This game is played on a standard five-by-three grid, with 20 pay-lines and you can enjoy it on any tablet, desktop, or mobile device that supports JavaScript and HTML5. 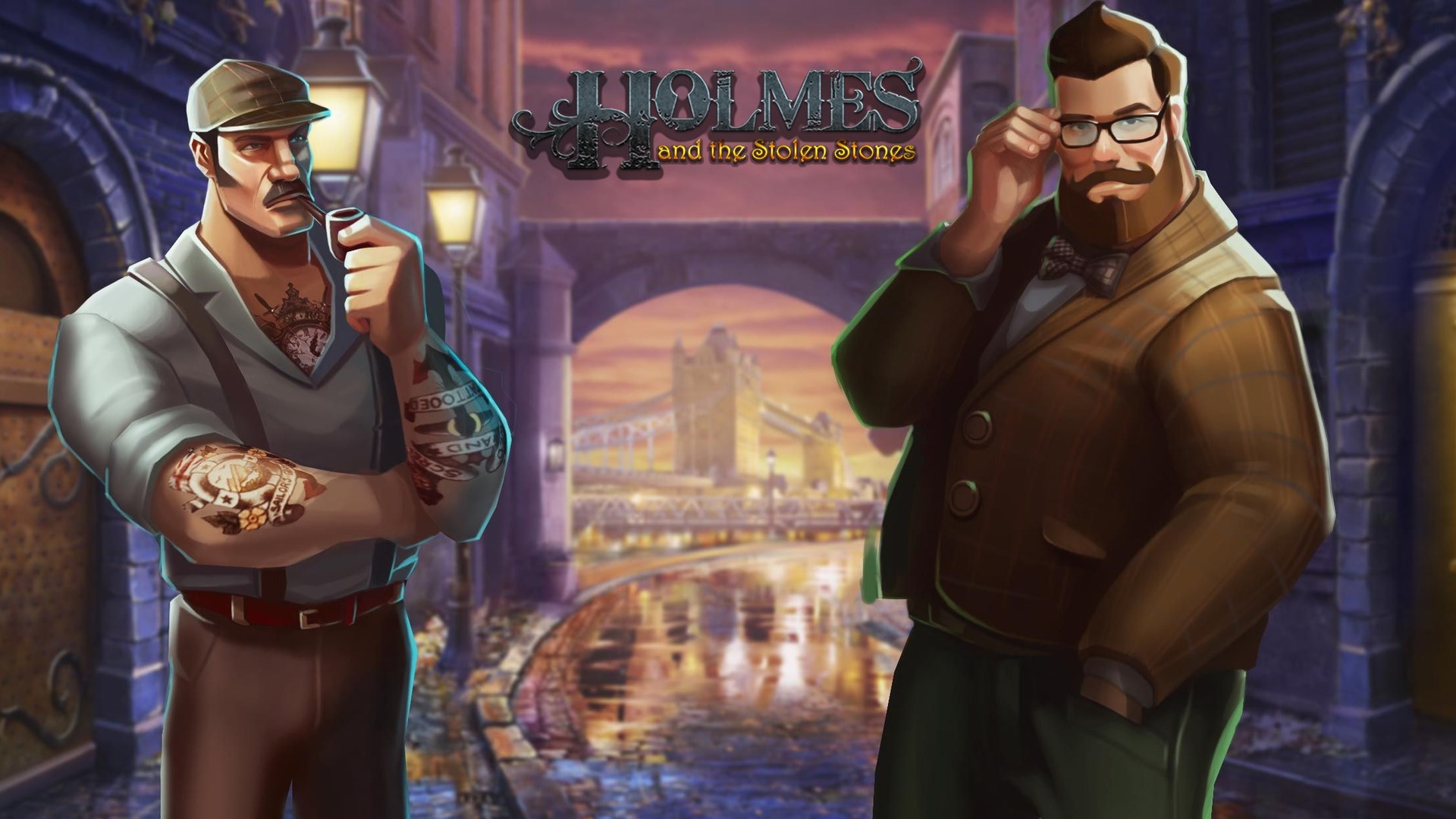 Playing Holmes & the Stolen Stones slot is much simpler than you might thing.

Load up the game and you’ll see a very standard control panel.

At the left of the panel, the pay-lines are shown and next to that you select the coin value for your bet. To the right of that, there is the spin, the Autospin and the Max bet control that morphs into a large window that shows the latest information from the game when not in use. A smaller window showing your account details completes the panel to the right.

Look for further controls in the game frame.

The pay-table opens up with the usual card suits – clubs, diamonds, hearts, and spades from the bottom up.

Then there’s a magnifying glass, a binder full of notes, Watson, and Holmes.

There is also a diamond symbol that awards jackpots.

The scatter is a keyhole.

The bonus games are a jackpot game, a bonus game, and two free spins rounds.

The jackpots are awarded by the diamond symbol. If you are able to collect five diamonds of the same colour then you will be awarded a jackpot.

The free spins round are triggered via the keyhole symbol.

You can also win free spins via shards. Shards are parts of the diamonds that trigger the jackpots. Once you get five shards of the same colour you will win 10 free spins.

All wins in all free spins games come with a three-times multiplier.

Another keyhole symbol triggers the bonus game. This is a prize pick game with cash prizes of parts of diamonds to be found.

We kind of gave away our verdict in the opening line of this Holmes & the Stolen Stones slot review. We love Yggdrasil games because they look fantastic and play beautifully. Even after over four years, Holmes & the Stolen Stones slot still looks beautifully designed. It might be quite the current fashion – which is more minimalist – but you can easily see how much love and skill has been loaded into this game.

And then you start to play. The game is great. It’s generous and there’s a big variety of bonus games that offer genuine thrills and the potential to win some really big prizes. Progressives, even if they are local rather than internet-wide, always come with the tantalizing possibility of some really big wins.

This is a mystery well worth solving and a case we certainly think you should accept. Are there any drawbacks? Nothing that we can see, unless complex games put you off, but – as with all Yggdrasil games – the instructions and extras here are top quality as well.