Australian developers Reel Play released Hypernova Megaways slot in 2019. It is their first release using the Megaways engine that delivers many thousands of potential winning combinations that goes far beyond the usual pay lines.

As you’ve guessed, no doubt, Hypernova Megaways is a space-themed game, with a spacey psychedelic theme.

The main bonus features include a jackpot feature with four fixed prizes, respins, and alongside the Megaways, this is a game with atypical reel sets offering more symbols depending on symbol size, there are also cascading symbols.

Megaways is a massive hit in the slots world. Instead of a set number of symbols on each reel, the numbers change to allow a massive number of potential wins. This game has 117,649 potential winning combinations. The number of combos flashes up before each spin in an indicator above the reels.

You can play a load of Megaways slots to try out, from a number of developers. There’s plenty to entice you into the world of Hypernova, including major prizes, like a 2,000-times stake top jackpot prize, and an 8,641-times stake base game prize.

What game provider is behind Hypernova Megaways Slot?

Reel Play produced this game, releasing it on 16th August 2019. ReelPlay are a new name for Chance Interactive, who were founded in 2014 and rebranded in 2019.

They focus – they say – on memorable slots and they also work with partners to produce their games. They have nine games under this brand on the UK market and are licensed by the UK Gambling Commission.

When was Hypernova Megaways slot released?

This game was released in August 2019.

What is the Hypernova Megaways RTP?

The theoretical return to player is 96.095%. This means a house edge of 3.015%. These measures are long-term measures of how a game is expected to perform over its entire life, and this includes factoring in that players will play in a certain way, so you must not expect your game to follow this pattern.

How many reels and pay lines does Hypernova Megaways have?

The Megaways set up under license from Big Time gaming means a potential of 117,649 ways to win. There are six reels in the set with various sized symbols giving a random set of rows. Above the reels is a horizontal reel of four symbols.

What theme is used in Hypernova Megaways slot?

There is a space theme and a classic slot theme to this game. The backdrop of galactic cloud formations and the music is definitely spacey, while the symbols are classic gems and card suits.

Can I play Hypernova Megaways on mobile?

You can play Hypernova Megaways on any device that will support JavaScript and HTML5.

What is the Hypernova Megaways slot variance?

This is a medium to high variance game. Variance is a ratio between the size of prize and frequency of pay-out, with high-frequency games paying out bigger prizes less often.

Does Hypernova Megaways have free spins and bonus rounds?

There are bonus rounds in the shape of a jackpot respin feature. The game also has cascading wins, a Hold and spin feature, a Lock It link feature, Megaways and Multi ways. The respins feature comes with a jackpot prize in four tiers.

Is there anything else I should know about Hypernova Megaways slot?

The game has great music! 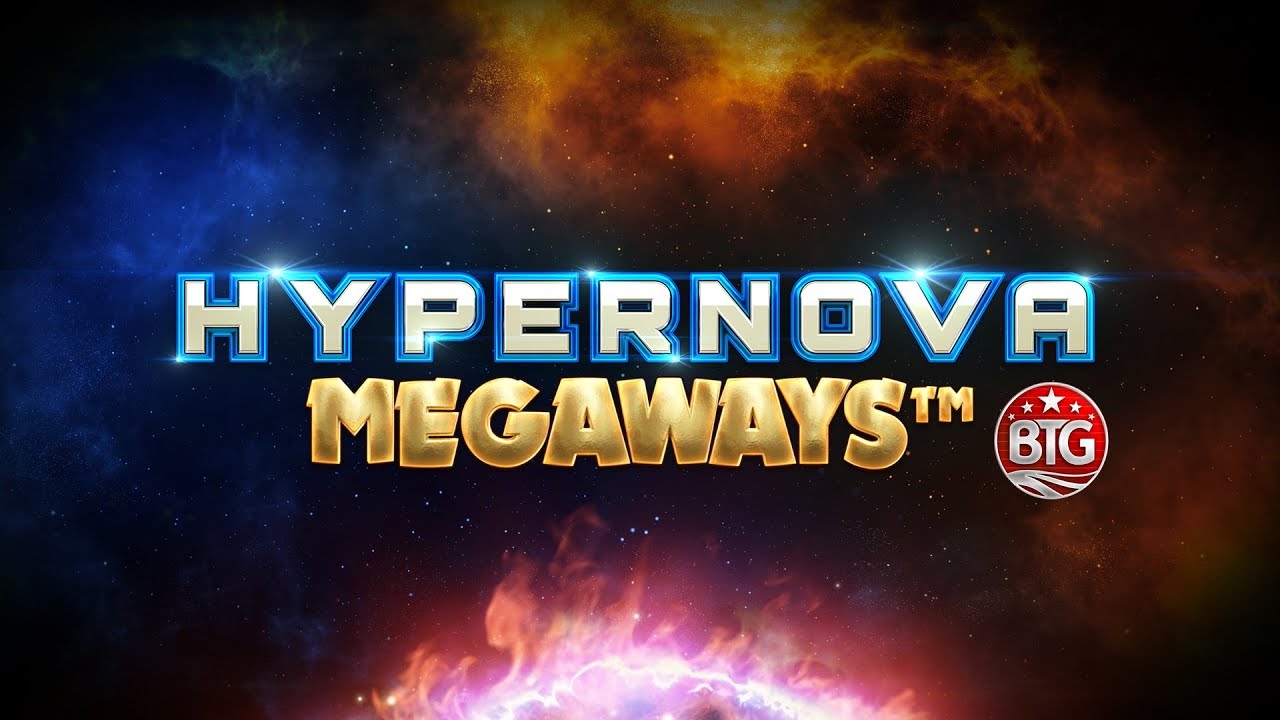 The game runs on a standard control panel with a floating spin button to the right of the reels over a menu button to control information and betting controls to the left of the reels. Check the game frame for the rest of the controls.

The symbols are from the deck of cards at the bottom end of the pay table, running from nines to aces. Higher up we hit gems, with diamonds, rubies, emeralds and sapphires. The top-paying diamond pays an excellent 100-times stake for a full house of six.

There’s a wild that subs in for everything other than the scatter.

The scatter symbols are hypernova logos. A set of these trigger the Jackpot Respins feature. The scatters are locked while three respins follow. As new scatters hit, they too are locked and the respin counter reset. The feature runs until there are no more respins or you’ve filled the reels with scatter. All prizes are added up, with jackpot prizes awarded from the four-level Hypernova jackpot if won.

A bronze jackpot pays 10-times stake, silver pays 50-times bet, gold is worth 250-times stake, and the platinum is the top prize in the game at 2,000-times stake. The top two jackpots trigger once only in each round, but lower jackpots can pay out without limit. It’s in the respins feature that the top prize of 8,641-times stake can be won.

We loved our trip to hyperspace on ReelPlay’s highly entertaining exploratory mission. If you like Megaways – and the gaming charts suggest that most online video slots players do – then we can’t think of a better game to try out this engine with.

It’s got variety popping out of every planetary ring in the gameplay, with great features in the base game and a really good extra feature that isn’t quite a free spins round but very nearly is.

The prize pay-outs are very generous, so play safely and enjoy this game, and you never know you might hit lucky with a big win. Some players love a free spin round, so bear that in mind if you’re choosing games.

Graphically and in its soundtrack this is a great quality game too, it reeks of high quality and if ReelPlay keep pumping out titles like this we’ll be really happy to see them launching more rocket missions.