Vampires! Are you scared? Well, don’t be. For a start we don’t think you should play a game that scares you – that would be foolish – and these vampires are the moody, sexy, romantic vampires of the Twilight Saga, more Kristen Stewart than Nosferatu.

This is trip to the world of semi-darkness is courtesy of Microgaming, and it’s a suitably sophisticated take on the story with lots of great looking graphics, and a load of back story and bonus extras.

This game self-consciously evokes the narrative structures of the movies and offers “story” buttons to click.

On top of the bells and whistles, you have a pretty big top prize, some great value betting, and a generous RTP.

The Immortal Romance slot game has been around since 2011 and is still bringing in fans, so we have to assume that Microgaming – one of the all-time greats of online casino gaming – are doing something to put the stake in the heart of gamers.

Immortal Romance is developed by Microgaming and is one of the most loved and popular of their slot games.

When was the Immortal Romance slot released?

What is the Immortal Romance RTP?

Immortal Romance has quite a decent return to player rate (RTP) and it stands high at 96.86%.

Immortal Romance has 5 reels, 3 rows, and instead of standard pay lines, Microgaming implemented 243 ways to win for more chances for winning.

Yes, Immortal Romance can be played on mobile devices as Microgaming made sure to bring us the mobile version in 2017.

What is the Immortal Romance variance?

Immortal Romance is a high variance slot machine. There are pretty big wins hiding in the Free Spins but it will take a while to get a chance to grab them.

This slot can be played from as little as 30p per spin up to the max of £30 per spin. The maximum amount to win in Immortal Romance is x12,000 the total stake!

The Chamber of Spins is the main attraction of Immortal Romance. This Bonus is where you can progress up and get a chance at 4 Free Spins Bonus rounds. Each Bonus is represented by a vampire character and each comes with a different number of spins and features such as multipliers, tumbling reels, or replicating wilds. The random Wild Desire feature in the base game can award you with wild reels.

Is there anything else that I should know about the Immortal Romance slot?

If in the base game Wild Desire become randomly active and turn all five reels wild, you are in for a win of x1,200 the total stake!

Immortal Romance is a cult slot machine and one of the most popular by Microgaming. And if you liked this one, then you should also try Microgaming’s Thunderstruck II which is similar to Immortal Romance. But if you are into vampire-themed slots then Blood Suckers II by NetEnt or The Vampires by Endorphina should be on your list. 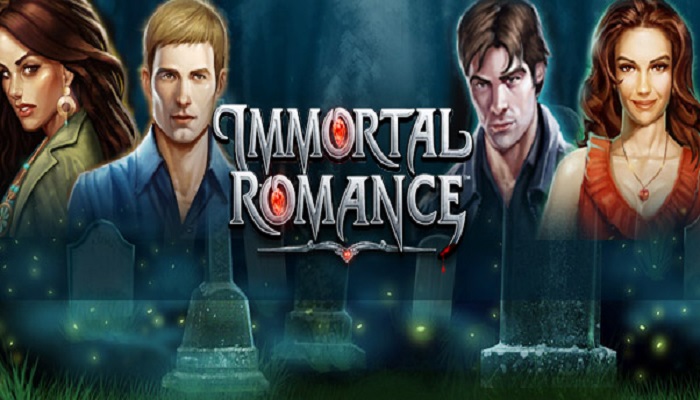 These Vampires aren’t all “take, take, take”, and they’re offering players a very generous RTP of nearly 97%. The actual figure – 96.86% – is right at the top of the current market, though you should remember that this – and the medium volatility measure – are relatively limited in the information that they can offer a player on how a game will perform in a single session.

The top prize is a very nice looking 72,900 coins that you can win on betting that runs from 0.01 to 6 coins. (Always check the value of coins and limits on staking and wins at the site you’re using.)

There’s a standard five-by-three layout, with Microgaming’s 243-ways-to-win system in place as the pay-lines set-up.

If you’ve got Flash, JavaScript and HTML5 – remember to update all your programmes for safety – you can play Immortal Romance slot across all desktop, tablet and mobile platforms.

There’s a very flat look to the screen, with squared-off reels and a quite complex control panel at the bottom of the screen.

Have no fears though, if you can play any slot game you should learn your way around this one fairly quickly.

At the left of the screen is a pay-table button over the balance window. To the right of that, you can set the coin value. Then there’s the coin level window, with a linear scale from 1 to 10. Your total bet amount shows up in the next window along to the right, with a bet max button underneath that.

The spin button is at the bottom right of the screen.

The logo is a wild, and stands in for everything but scatters, and also delivers double wins.

The first bonus is Wild Desires, which triggers at random, potentially turning all the reels wild (but disabling the free spins while it’s in the action).

The Chamber of Spins is the main bonus game, awarded by 3, 4, or 5 scatters.

In the Chamber of Spins, there’s a sequence of bonuses based on the characters.

The Amber bonus is 10 free spins with a 5-times multiplier. Amber is your first bonus feature.

Next up is Troy, which is a 15 free spin feature with random multipliers up to 6-times triggered on the reels. Troy appears from the 5th trigger.

Michael’s bonus is 20 free spins with Rolling Reels of consecutive respins and a multiplier that climbs to 5-times. This game triggers from the 10th bonus feature.

Finally, the Sarah bonus is 25 free spins with a Wild Vine feature. This adds an extra symbol that changes random symbols into wilds. You can retrigger the free spins from this feature, which is available from the 15th time the free spins trigger.

Immortal Romance slot has millions of fans, who have probably collected millions of pounds in wins on this generous machine.

It has a particular look and feel, that is a bit dated to our eyes, but obviously is to the taste of a hell of a lot of players. The pay-table is generous and the RTP is among the best in the business on a good range of betting.

The big attraction to this game, though, is surely its depth. The characters come with a back story that you can check out, and the atmosphere of the whole is excellently rendered. And those bonus games are genuinely engaging and complex. It’s a clever step to offer them as sequentially triggered games because that’s bound to keep players interested in playing.

It’s glamorous and a bit mysterious, and really true to the deathly feel of the romantic ideal of this sort of vampire fiction and film.

If there’s a criticism of this game it is that it is very complicated. Players seem to be turning away from these games of late and trying to return to something more retro and more simple, and that works very well on small screens. The screen of the Immortal Romance slot is quite busy, and that might be an issue for some players.

We got seriously bitten by this game, though, and we think you should give it a try at your favourite online casino now!