A yoho ho and a bottle of something is in order to toast the arrival of this well-anticipated sequel from Play’n GO – the Jolly Roger 2 slot!

We’ve had to wait long enough for this jolly pirate crew to circumnavigate the globe to sign up for another journey on a title that was first released in 2012.

The slots industry has changed a lot in that time, and among the less welcome changes are RTP ranges, which are in evidence here.

Better are the improved gameplay and graphics that give us a beautiful looking title that’s great fun to play.

There’s never a shortage of pirate titles – a natural fit for treasure-hunting slots fans – but should you walk up the gangplank of this vessel? 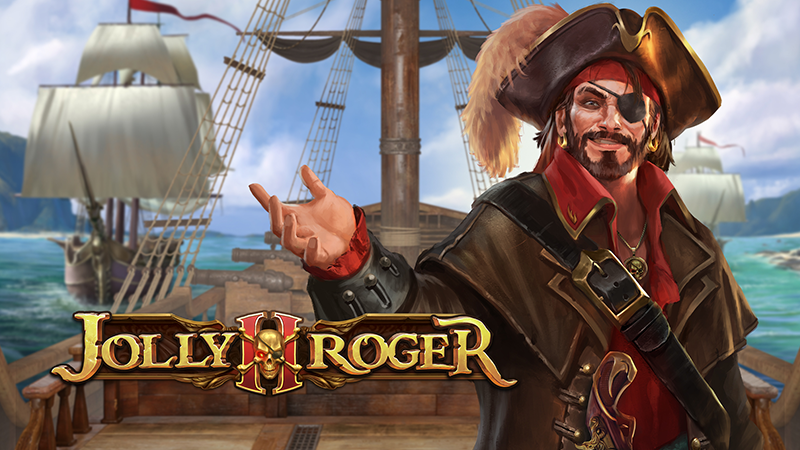 You’ll probably recognise the standard Play’n GO control panel when you load up Jolly Roger 2. Select your total bet on a sliding scale and hit play and you’re good to go.

The information button opens up the pay table.

This opens on a 10 to aces run of cards, paying up to 2.5-times stake. The high paying symbols are jewels and they pay up to 10 –times stake, the same value as wilds award.

Free spins come via the pirate chief scatter. This opens a bonus quest with a choice of four features: two free spins rounds (Bottle of Rum, and Battle), a Treasure Hunt, or an instant prize.

Bottle of Rum free spins has reels filled with wilds.

The Battle feature allows you to win extra multipliers on the reel.

The treasure hunt is a prize pick game.

A compass symbol is a multiplier throughout the game.

Ahoy! We’re more than ready to sign up with this crew, and not just because the game looks great and sounds pretty good too (though crowd noises can get overwhelming after a while).

This game has great prize potential – in most circumstances – and offers some really sophisticated gameplay, including video game-like features that will really appeal to younger players.

Games with a lot of features can feel complex, but the instructions here are nice and simple and there’s no reason to be scratching your head. A few spins on demo mode are always a good idea with a new game in any case.

The win potential is good, but… because the RTP range here starts rather low. We don’t like RTP ranges, but it looks like they’re here to stay. We simply cannot imagine the circumstances in which a casino site is going to do anything other than set the RTP range as low as it possibly can, while using high ranges as a lure to bring in extra players.

Maybe we’ll be proved once. In any case, check the deal at the sites you use as you load up and play this compelling pirate adventure.