If you ever watched the classic movies of Ray Harryhausen you might feel at home with Kingdoms Rise Chasm of Fear slot, the latest edition to the popular series of adventure/fantasy games from Playtech Origins, a relatively new offshoot of the giant Playtech empire. A networked jackpot is an extra attraction to sign up for this trip.

Delivered with a Ways to Win engine, you can enjoy respins, wilds, and free games as relatively standard bonuses. The series link up also means you get to enjoy a symbol collection feature that allows you to buy features from the series shop.

This adventure story takes you down a dangerous path, but do you want to step on board the longboat and test your courage?

This game comes from Playtech Origins. Playtech may be the biggest company in the whole online slots world, and they’re having children! This baby, Origins, has 34 titles to their name so far, and their biggest hits are in series: Buffalo Blitz, Kingdoms Rise, Age of Gods.

When was Kingdoms Rise Chasm of Fear slot released?

What is the Kingdoms Rise Chasm of Fear RTP?

The advertised theoretical return to player is an extremely generous 97.06%, a house edge of under 4%. This is a long-term measure and you shouldn’t use it as a predictor of how your game will go. We suspect this is the RTP with the progressive jackpot included rather than on the base game as a standalone.

This is a classic slot set-up with a 5 by 3 grid, and an expanding number of ways to win starting from 1,024.

What theme is used in Kingdoms Rise Chasm of Fear slot?

Can I play Kingdoms Rise Chasm of Fear on mobile?

What is the Kingdoms Rise Chasm of Fear variance?

The variance on this game is high. High variance games should pay out bigger prizes but do so less often.

Does Kingdoms Rise Chasm of Fear have free spins and bonus rounds?

There’s a huge range of bonus features, that include a free spins round. Free spins have an extra 2 rows of symbols.

Is there anything else that I should know about Kingdoms Rise Chasm of Fear slot?

You can retrigger free spins with extra sets of 3 or 6 games. 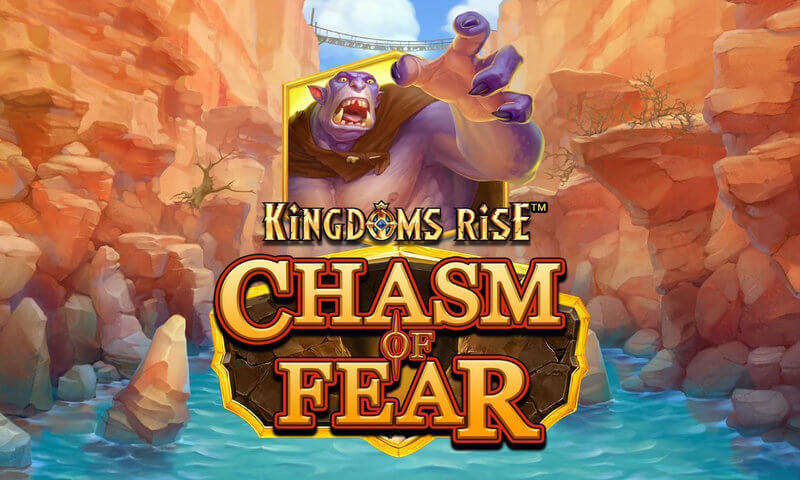 A lot of features don’t mean a complicated game experience in this fun, well-presented game.

A simple control panel sits under the reels. Click on the “info” button to open the pay table and instructions.

The top of the pay table is the sea serpent paying 50-times stake for a set of 5. There are also wilds and scatters, including wilds with multipliers.

Both respins and free spins are played with 2 extra roes of symbols, and bigger numbers of ways to win as a result. You can retrigger free spins with the scatter.

Tokens appear at random on the reels and can be collected and spent in the Kingdoms Rise shop, allowing you to purchase features.

Where available, you can play for the Kingdoms Rise jackpot, which is triggered at random from the base game and competed for in a second game.

Super presentation adds a great gloss to a game that has plenty of meat!

The Kingdoms Rise series has provided hit after hit for Playtech and we’ll be amazed if this one doesn’t also do extremely well.

Please make sure you read and understand the rules of this game, as there is quite a lot going on. Once you’ve done that – or had a few demo spins – you’ll soon be enjoying a monster of a thriller with seriously big win potential and a progressive jackpot.

Networked games are designed to make you play more, so make sure you’re not spending too much as you try to collect tokens for a continuing game.

The base game here has nice features, including a 5-times multiplier wild, and if you hit the base game you’ll be sailing on with a song in your heart!