The luck of the Irish has never been so rewarding, thanks to the Leprechaun’s Magic Megaways slot!

Powered by Red Tiger Gaming, players are invited on a journey through the rolling green hills in search of epic riches. Not only will you find a base game jackpot but thanks to the revolutionary ‘must drop’ jackpot network, Red Tiger’s title offers three additional jackpots, two of which are guaranteed at certain levels.

Combining a Megaways mechanic with free spins and expanding symbols allows for the edge of your seat entertainment because you never know when those features will kick in. Usually, games of this nature offer cascading symbols which could lead to more than one win on a single base game spin, however, Leprechaun’s Magic Megaways doesn’t!

Don’t let that put you off your quest for hidden riches because there are ‘golden’ elements that could ‘expand’ your bankroll on any spin!

The value of stake will determine the amount you can win from the 9 different paying symbols. As ever, the card values are among the lowest-paying with at least three matching symbols needed for a win.

Due to the Megaways mechanics, matching symbols need only be on consecutive reels from left to right, eliminating the need for win lines.

Higher value symbols are the pie, leprechaun hat, horseshoe and the leprechaun himself and with these, only two are needed on consecutive reels (starting from the leftmost). 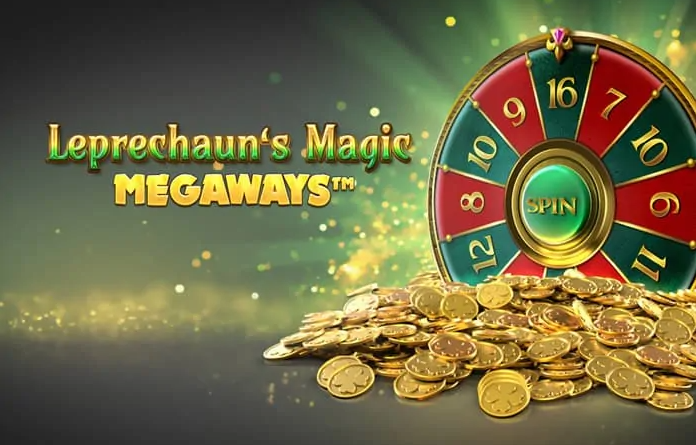 There are two main features to talk about, the first being the symbol expand. Once a base game win is triggered, that symbol will then become gold. You can keep a track of which symbols have been activated via the paytable symbol bar to the top of the reel engine. The spin proceeding your win will highlight the previous winning symbol as (and if) it falls onto the reels.

At least three of the lower-paying or at least two of the higher paying symbols are needed for the feature to fully kick in and unlike usual pays, they can appear anywhere!

This allows for wins from left to right, in the middle and right to left, and they don’t even need to appear on consecutive reels! If you have the relevant number of golden symbols across the slot machine, they will expand to fill the entire reel in which they sit, offering more ways to win and bigger prizes.

Next up is the free spins bonus which is awarded in the presence of three golden pots.

A super-sized wheel made up of 12 segments in red and green will appear. Give the wheel with its spins from 4 to 16 a spin, to see how many free games (also known as magic spins!) you get to play with.

Just like the base game, golden symbols come into play only the number in play is anyone’s guess!

As far as bonus features go, the Leprechaun’s Magic Megaways slot is not the best, but it’s exciting, nevertheless. The golden symbols during the base game are regular only winning form them is another matter altogether! Free games like to remain hidden for as long as possible and it’s easy to see why – because you have more opportunities to win! It’s rare you get two golden expanding symbols during the base game, but you can get as many as 9 (the max) to activate during your free games.

High rollers will ultimately feel the pinch with that top stake of just £4, but with a multiplier of 20,000x on offer, it’s worth a shot. Low stakes players can bank on frequent small value wins, but don’t get your hopes up for an entire reel of golden symbols, because the chances of this happening are extremely rare!

When was the Leprechaun's Magic Megaways slot released?

What is the RTP of the Leprechaun's Magic Megaways slot game?

Leprechaun's Magic Megaways is a 6-reel slot with as many as 15,625 ways to win per spin. Each row can house as many as 5 symbols. The more symbols in view, the more Win ways.

Leprechaun's Magic Megaways is a typical luck of the Irish themed video slot.

Leprechaun's Magic Megaways can be played on mobile only you may be required to rotate your device to landscape mode to play.

What is the variance of the Leprechaun's Magic Megaways slot machine?

Leprechaun's Magic Megaways is a high variance slot game. High volatility slot game pay out less often on average but the chance to hit big wins in a short time span is higher.

A multiplier jackpot of 20,000x is achievable by playing the Leprechaun's Magic Megaways slot game.

Is there anything else that I should know about the Leprechaun's Magic Megaways slot?

The free spins bonus does not guarantee a win.

Go ahead with Wish Upon a Leprechaun by Blueprint Gaming, only it has 6-reels, up to 7-rows and up to 117,649 ways to win. Add to that free spins with an increasing multiplier and a random reel modifier for more ways to win than ever before.