I don’t know when it last snowed in Miami. It must be a long time ago, if ever, and no doubt it was a freak event!

Snowborn are brand new, and they do come from the snowy north, with bases in Helsinki, Finland, and Stockholm, Sweden. This Miami Glow slot game from this new studio is a tie-in with industry giant Microgaming, who are UK based, where snow is also no stranger.

Snow aside, the theme here is warm, sunny, and sultry. Using Miami the legendary clubbing and party town rather than anything else (like for example, its role as a crime hub!) as its Floridian theme.

The graphics and sound are heavy on neon and party colours and vibe and the main bonus are win multipliers, respins with sticky wilds, and a Glow Bonus (the free spins round).

The game comes with higher than usual variance and good starts too.

But should you check out the light of the Miami Glow?

What game provider is behind Miami Glow Slot?

This game is a partnership between Snowborn and Microgaming. These partnerships are becoming more and more common. They allow big gaming companies to bring in the more innovative and nimble design skills of smaller independent companies, and they allow those companies to get their games in front of more players. Microgaming have a platform for these collabs, and Snowborn are early beneficiaries. They were founded in 2020 and have only a couple of games on the market thus far. Watch this space with these Nordic guys though.

When was Miami Glow slot released?

What is the Miami Glow RTP?

The RTP of this game (the theoretical return to player) is 96.06%. This makes Miami Glow very average in the current market. RTP is measured over many millions of simulated spins and also assumes that players will react in a certain way so please do not use it as a predictor of how you will experience a game.

How many reels and pay lines does Miami Glow have?

This game plays on a classic slot grid of 5 reels and 3 rows. There are 10 pay lines running across the 15 symbols in play.

What theme is used in Miami Glow slot?

The theme is Miami, the tropics, holiday glamour, and partying, with neon light graphics.

Can I play Miami Glow on mobile?

You can play Miami Glow on mobiles, tablets and desktops that allow you to use HTML5 and JavaScript – which is most of them!

What is the Miami Glow slot variance?

The variance – or volatility – of Miami Glow is medium to high. High volatility games pay out bigger prizes but tend to pay out prizes less often. Like RTP this is a long-term measure and a general guide rather than a prediction of how you’ll do on a game.

You can bet between 0.2 coins (20p in UK sites) and £20 (or 20 coins) on Miami Glow. The top prize is 5,000-times your stake. Please always check pay-out limits and financial details on the site you are playing the game on.

Does Miami Glow have free spins and bonus rounds?

Yes! Miami Glow has a free spins round. The free spins feature comes with stacked wilds.

Is there anything else I should know about Miami Glow slot?

The game also has a respin feature with sticky wilds. 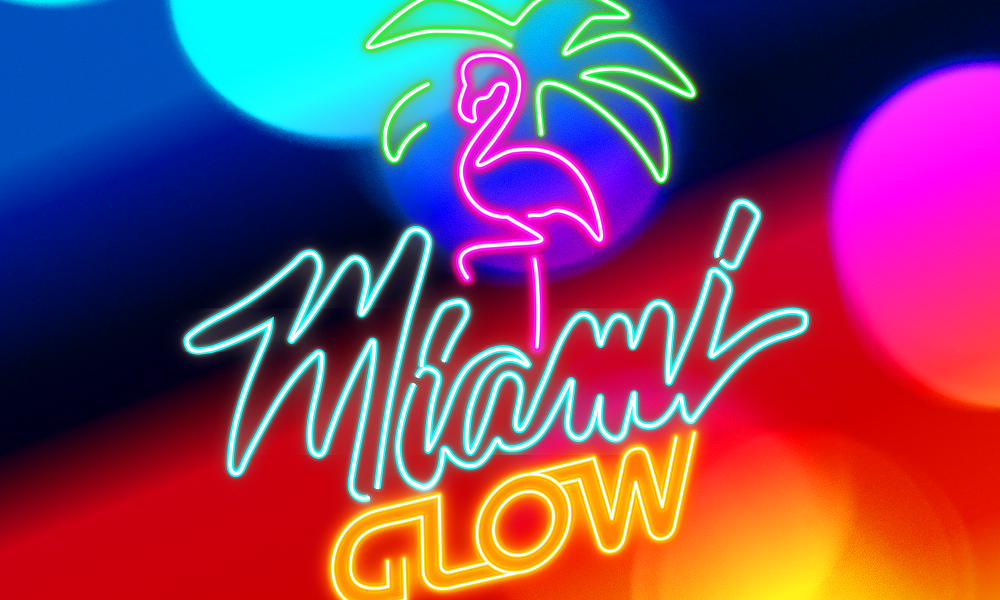 These guys are newcomers, but they know what they’re doing, and this is an easy game to play, and well set up for mobiles.

The controls are big, diagrammatic buttons, to the right of the screen, where a huge spin button sits under the autoplay function. This allows you to stop Autospins on a set number, on a size of the loss, or on a large single win.

Under the spin control is a Bet window, where you tap or click on an amount to pick your stake.

The menu button on the left opens up a two-item menu with the paytable and a lightning symbol that we think if turbo.

Open up the pay table and you’ll see that it opens on card suits, clubs, diamonds, hearts, then spades, paying out between 0.2-times stake and 3-times stake.

Sticky wilds pay the top amount, and trigger respins with the wilds in place until they no longer pay and retriggers stop. Standard wilds just sub in.

Multipliers are random, with 2, 3, 5, or 10-times multipliers available in the base game and the bonus round.

The Glow symbol is a scatter on reels 1, 3, and 5, and it triggers the free spins that come with stacked wilds.

New boys from the Nordic countries, Snowborn have done a great job in summoning up the glamour and glitz of Florida’s ultimate party city.

There’s a lot of depth to the gameplay though despite the retro feel of the game.

They’re good features too, with multipliers on the reels in both levels of the game. You get wilds in the base game, and the sticky wilds are a nice feature.

The bonus game is great value and could deliver that very generous top prize.

This is a high volatility game, so you should be aware of that when you load it up. You’ll love the bright 3-d graphics and see-through reels and this game shows the benefits of mobile-first design. If we have a minor problem with this game it is only in the menus, which weren’t super-clear or easy to use when we first loaded up the game.