Is Ozzy still a big name in music? He’s arguably a bigger TV personality than he is a musician these days, thanks to his reality TV antics, and his family.

But the roots of Ozzy are in the heaviest of heavy metal. In Black Sabbath, the band from Aston in Birmingham in the UK, he arguably helped to invent the genre, adding his screaming vocals on top of a heavy grinding stew of distorted noise inspired by the area’s metal-basing industries.

The Ozzy Osbourne slot game is very much branded as Ozzy the musician. It’s a standard slot on which you can stake up to £100. The signature bonus is a Symbol Charge that gives a four-part respin in the base game and adds a bit of grind to the free spins round.

The look is dark and moody, and very metal, with images of Osbourne from various stages in his long music career (except the part where he was signing duets with his daughter).

Of course, there’s an approved Ozzy soundtrack, and lots of visual and aural effects to keep you interested. But should you shell out a few coins of heavy cash?

Ozzy Osbourne is an electrifying slot developed by Net Entertainment.

When was the Ozzy Osbourne slot released?

What is the Ozzy Osbourne RTP?

The theoretical return to player rate (RTP) of the Ozzy Osbourne slot is 96.3% which is a standard RTP most slots come with.

This slot comes with a standard reel structure. There are 5 reels, 3 rows, and 20 fixed pay lines. To form a win you need at least three matching symbols on the active pay line starting from the leftmost reel to the right.

Ozzy Osbourne comes with a metal music theme. The slot is based on one of the most popular metal musicians Ozzy Osbourne (Black Sabbath). The slot features details relating to this music genre so you will see some satanic symbols as well as Ozzy himself in different poses.

Yes, Ozzy Osbourne slot can be played across all kinds of smartphones.

What is the Ozzy Osbourne variance?

The Ozzy Osbourne slot is a high volatile game. This means that it has a big winning potential but also, the big wins won’t be that easy to catch.

The minimum to bet at this slot is 20p per spin. The top prize in Ozzy Osbourne is x2,500 the total stake per spin!

Ozzy Osbourne slot comes packed with features. The main is the Free Spins Bonus that awards 4 free spins with the special Re-Spin Feature (also active in the base game) active on each free spin. The re-spin feature is triggered (in the base game) by two scatters.

Charged Up feature is part of this and symbol will be chosen with a feature being applied to the symbols: coin wins, wild transformations, multipliers (x2 and x3 in the base game and x5 and x7 in Free Spins), or Free Spins.

Is there anything else that I should know about the Ozzy Osbourne slot?

Ozzy Osbourne slot can bring you up to x12,000 the total stake if you manage to scoop all those multipliers in the Free Spins.

If you like music-inspired slots like Ozzy Osbourne, there are many similar you can try out. For example, NetEnt has a few more of these such as Motorhead slot, Jimi Hendrix, and Guns n’ Roses. Similarly, if you want a slot with rock music and great winning potential Big Time Gaming’s Lil’ Devil or Final Countdown slot are great choices.

NetEnt are behind this game, which was released in November 2019.

NetEnt are among the biggest slot companies in the world. They are ranked number one in the UK, and as we were working on a recent top-10 we came on NetEnt title after NetEnt title.

This gives them a lot of market power and means their games are always highly visible. They have a market share of nearly one-fifth globally and getting on for a third of the European market. As the company also makes casino management and back-office systems, you can be sure they’re using that power to put their games in front of customers.

They’re quality games too though. Starburst has been a favourite for years and is still the UK’s number 1 slot, and Gonzo’s Quest has proved perennially popular too.

The theoretical return to player of this game is 96.67% or a house edge of 3.37%. This is not an exact measure of how each session you have with a game will go, but it gives you an idea that your experience of the game should be about what you get at other titles in terms of prize money because this is bang on the industry average. The “medium” variance also suggests you’ll get a familiar experience. This measure ranks prize size against prize frequency.

The layout is standard, with a five-by-three grid and 20 pay lines.

You can play this game on any desktop or mobile device that supports JavaScript and HTML5. 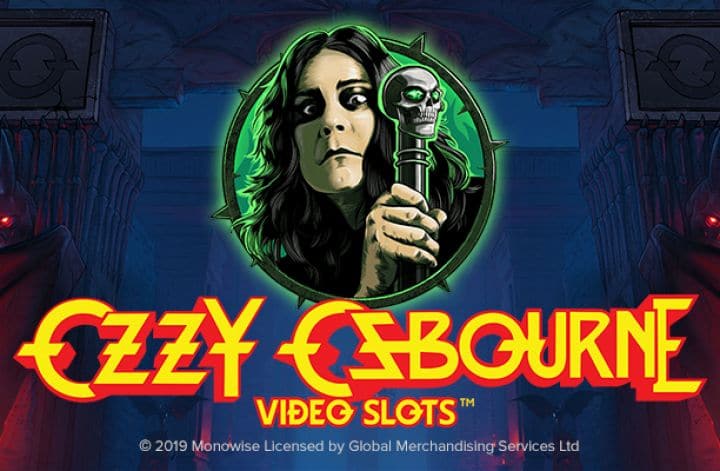 Most NetEnt games operate on a single template, and you’ll soon find yourself playing Ozzy Osbourne slot confidently and easily.

The control panel runs along the bottom of the screen. At the left of it is the information button, which will open up the paytable. Next to that is the bet amount, which is set with the bet level meter to the right of that and the coin value meter to the right of the central panel. In the centre, there is the autoplay, max bet and spin control. Finally, at the far right is the balance.

Make sure you know your way around the controls of the game and its rules before you play. Look for further controls, including sound and game settings, in the game frame.

Then we have the many changing faces of Osbourne.

There’s a lot to get through here, and we recommend you make sure you know the bonus rounds before you start playing.

The machine is nicely styled in a fashion that is very true to the metier of the title character.

If you like Ozzy Osbourne you’re going to play this game, but we hope that this spinner will reach out beyond the heavy metal community and have a fan base among all lovers of good slot games.

There’s a lot to enjoy in the gameplay and some potentially big wins to be won too.