This Phoenix Fire Power Reels slot game is one hell of visual experience. The Phoenix is a fiery creature, and his (or her) legend lives on in an explosion of colour, sound, and animation in Red Tiger’s June 2019 release.

Power Reels means a non-standard set-up, so if you like to try things that are a little different then Phoenix Fore Power Reels slot is the game for you.

The higher-than-usual volatility means you could be in for big wins here, but a great range of staking options makes this a safe and friendly choice for new players of online video slots or those who want to play cautiously. Remember that demo mode is always your friend when you try out new games.

As well as explosive visuals there is more than enough interest in the gameplay to keep players of all styles happy, with lots going on both in the base game and as bonus rounds.

The phoenix is all about rebirth and change, but should you be changing your online video slots routine to check out this title?

Phoenix Fire Power Reels slot is an interesting and lucrative slot developed by Red Tiger Gaming which is known for its great design and creative features.

When was the Phoenix Fire Power Reels slot released?

What is the Phoenix Fire Power Reels RTP?

This sloe features the industry average return to player rate (RTP) which stands at 95.13%.

Phoenix Fire Power Reels slots comes with a bit different reel structure that other slots. There are 8 reels, 6 rows with just 30 pay lines.

Phoenix Fire Power Reels slot uses the Greek mythology theme centred around the magnificent and powerful Phoenix. This slot is all about fire and the excellent design only enhances the whole glory of the mythological Pheonix.

Yes, Phoenix Fire Power Reels slot is playable across all devices including any kind of smartphone device.

What is the Phoenix Fire Power Reels variance?

Phoenix Fire Power Reels slot can be put in the medium to high variance set of slots. There will be smaller wins occurring in the game but it will be harder to catch those big wins across those 30 pay lines in the game.

The minimum to bet in Phoenix Fire Power Reels slot is 10p per spin which is great for players who like playing with smaller stakes. The max bet goes up to £40 while the top prize can reach up to x1,941 the total stake.

Yes, the Phoenix Fire Power Reels slot comes with a Free Spins Bonus round that awards 7 free spins and up to 3 Phoenix wilds that can land on a single spin. Winged (empty) symbols are important as they can be turned into wilds by the flying Phoenix which can lead to massive wins.

No, Phoenix Fire Power Reels doesn’t feature any jackpots in the game.

Is there anything else that I should know about the Phoenix Fire Power Reels slot?

Phoenix Wild is the most important symbol as it can appear stacked on the reels which can greatly increase your winning chances. Keep an eye on the Phoenix at all times!

Even though there aren’t that many Phoenix-themed slots out there (and there should be!), there are a few you can check out. Play n’ Go created an amazing slot called Phoenix Reborn with an amazing design, expanding wilds, and lucrative Free Spins with up to x5,000 the total stake winning potential.

The maker of Phoenix Fire Power Reels slot is one of the most famous slot companies in the world at the moment. Most of the slot industry’s news stays internal – unless it’s a bit regulatory or criminal matter – but the purchase of Red Tiger by NetEnt for more than £200 million was a big enough story to escape the industry press and get into the mainstream media.

Red Tiger were already quite a big deal. The company has produced around 120 slot games and has a lot of hits on its books. The company is relatively new, having been founded in 2014 on the Isle of Man in the UK (sort of – the island is a semi-offshore jurisdiction, and its tax advantages are one of the reasons so many companies are set up there).

Of their games, the current favourite in the UK is Rainbow Jackpots, an Irish game. After that, it’s Pirate’s Plenty Battle for Gold (one of a popular series), Dragon’s Luck Megaways, Da Vinci’s Mystery Super Lines, and Pirates’ Plenty The Sunken Treasure.

Red Tiger are licensed, safe, and have a great reputation in the slots industry. You can play their games with confidence.

The figure that stands out here is the layout. In a world of five-by-three games, this is a giant, with eight reels and six rows of symbols. That’s a total of 48 symbols, but there are just 30 pay-lines, quite a low number when there is potential for many more.

The number of pay-lines doesn’t actually affect your chances of winning, what does is the theoretical return to player. In this game, it is 96.22%, which is very competitive in the current market. The volatility is medium to high, which means you are slightly more likely to win bigger prizes, but prizes are likely to be paid out slightly less often.

If you’ve got JavaScript and HTML5 on your device you should be able to play this game. 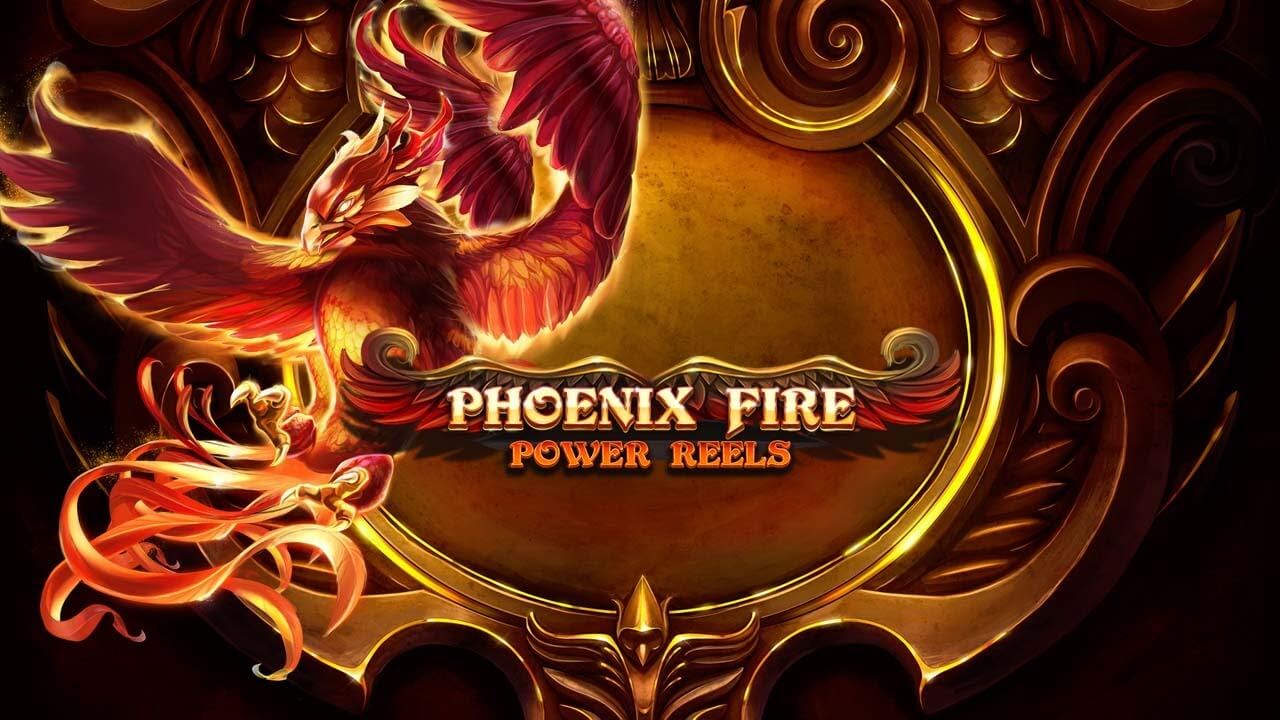 Despite the many differences from standard games in Phoenix Fire Power Reels, you’ll be spinning the reels with confidence thanks to the intuitive control set-up.

The spin button floats at the bottom right of the screen, with the turbo switch next to it. At the left of the panel is the auto spins option and the betting control – a single, simple plus/minus selector.

Other controls can be found in the game frame.

Click on the information button to check out the pay-table.

The lower paying symbols are the usual card suits. With eight reels you can hit wins anywhere on the reels that you see three symbols in a line. All of the card symbols pay up to 8-times stake for a full set.

Phoenix Fire Power Reels slot comes with some nice looking higher value symbols in the form of a golden cup, book of spells, rings and scrolls. You need between 3 and 8 matching symbols on a pay line in order to win, and you can win anywhere on the reels as long as you land at least 3 connecting symbols.

In the base game, the Phoenix is a wild, turning adjoining symbols with wings into wilds, or, if it is activated turning all winged symbols on the reels into wilds.

The free spins are triggered by the scatter, a “free spins” symbol.

There’s a lot of detail in this interesting and intricate game, but you shouldn’t be intimidated by this beautiful bird. Phoenix Fire Power Reels is one of Red Tiger’s best releases and we expect to see it around for a long time.

With a lot of symbols in play, the screen can look a bit busy, but it is beautifully designed and looks and sounds like a million bucks. You won’t quite win that amount, but higher volatility games mean bigger pay-outs and the pay-table shows some great rewards. The extra round is superb, with real depth, a load of adrenaline, and probably some big wins.