Pirate games remain a popular and deep theme with slot players. Psychology experts have a good deal to say – no doubt – on the attractions of outlaw or rebel figures, and the archetypal pirate quest for sunken treasure certainly chimes with a slots player’s search for jackpots. This Pirates Plenty The Sunken Treasure Slot is part of a series from a developer that’s been in the news lately and certainly has the kudos to demand attention for new releases. This game first hit the casino site lobbies in November 2018.

The stand-out features of this game are the big top prize, of 100,000 coins, and some nice design that puts you at the bottom of the sea in some very atmospheric settings. An extra reel can be unlocked for six set wins. The high variability also makes Pirates Plenty The Sunken Treasure slot stand out from the crowd.

Should you sign up to sail under the Jolly Roger for this treasure trip?

Let’s have a closer look in this Pirates Plenty The Sunken Treasure slot review.

Pirates Plenty: The Sunken Treasure slot machine is developed by Red Tiger Gaming so you can expect a top-notch design with smooth graphics.

When was this slot released?

What is the RTP?

The theoretical return to player rate (RTP)  is just on the average level of 95.06%.

Pirates Plenty: The Sunken Treasure comes with a classic layout. There are 5 reels, 3 rows, and 20 fixed pay lines.

This slot comes with a pirate theme. Red Tiger Gaming did an amazing job when it comes to the design of Pirates Plenty: The Sunken Treasure slot and you will enjoy the game, even more, thanks to the excellent graphics and creative pirate theme.

Yes, Pirates Plenty: The Sunken Treasure slot is optimized for mobile devices so you can easily enjoy this slot on your smartphone as long as you have a stable internet connection.

This is a high variance slot machine with plenty of action happening on the reels along with big winning potential.

The betting scale in Pirates Plenty: The Sunken Treasure slot starts at a minimum of 20p per spin and goes up to £20. The max prize to be obtained in this dark pirate slot is an amazing x5,000 the total stake per spin!

There are as many as four bonus features in Pirates Plenty: The Sunken Treasure slot including the Free Spins which award 10 free spins and you can progress in transforming low-paying symbols into wilds by collecting ghostly captain of the ship symbols.

The Wild Ships feature can turn entire reel wilds with x2, x3, or x5 added multipliers. Also, the Monkey wild symbol can award a re-spin with all low-paying symbols removed. Finally, you can unlock the 6th reel in the game when you fill the Treasure Map meter!

Is there anything else that I should know about the Pirates Plenty: The Sunken Treasure slot?

The top prize of x5,000 can be won on a single spin if you obtain those x5 multiplying wild reels.

If you like pirate-themed slots, then you can also try NetEnt’s Rage of the Seas slot which is a new release and comes with an amazing and sharp design that will keep you spinning for hours. Also, another pirate slot worth checking out is Thunderkick’s Riders of the Storm slot with walking wilds and lucrative Free Spins Bonus round.

Red Tiger are worth £200 million. That’s the value that NetEnt, one of the world’s biggest slot companies was willing to put on the company when they snapped it up in September 2019. The merger/acquisition was big news in the iGaming world.

Red Tiger are relative newcomers, having been founded only in 2014. They’re based in the Isle of Man, a sort of semi-offshore part of the UK. They had already released a good collection of well-received games, they have more than 120 on the UK market according to a well-regarded industry audit site.

But by partnering with NetEnt the company has won promotion to the top tier of slots. You should expect to see even more of their games from now on, but hopefully, Red Tiger will continue their dedication to innovation and design excellence.

As we look at this game, in October 2019, the company’s most popular titles in the UK are: Dragon’s Luck Megaways, this game, Pirates’ Plenty Battle for Gold, Rainbow Jackpots, and Mystery Reels Power Reels.

This is a high variance game. High variance means that the game is expected to pay out its prizes less often, but when it does pay out prizes they are likely to be higher in value. These games are sometimes recommended to gamblers who enjoy risk-taking more. That may be so, but these ratings are only guidelines: games remain random on a spin-by-spin basis, and you should play any game you fancy, as long as you remember to play safely.

The volatility has not greatly altered the 96.12% theoretical return to player, which is very standard in the industry right now.

There’s a standard 5-by-3 set up with 15 symbols in play, crossed by 20 pay-lines, with a sixth reel joining the party in some situations.

You can play Pirates Plenty The Sunken Treasure slot on any device that supports JavaScript and HTML5. 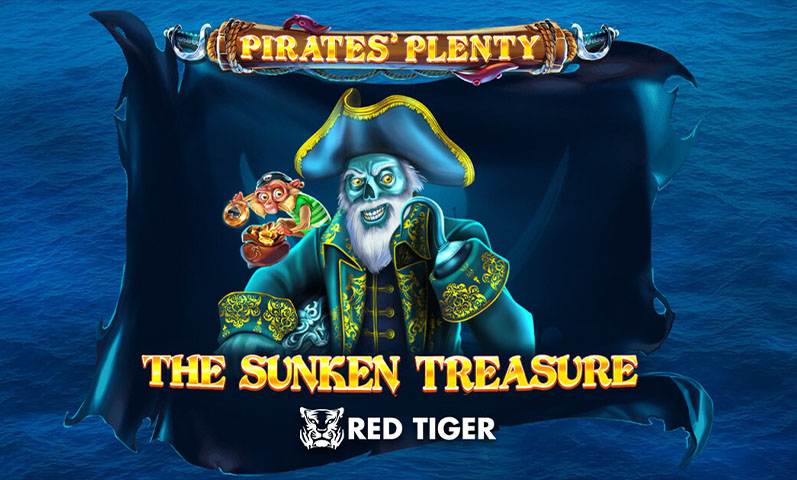 This is an easy game to play. In the current style, the controls are low-key and functional, rather than being involved with the theming or graphic style of the game too much.

An information window dominates the centre of the screen, bringing you good news of wins. The left of the screen contains the autoplay set-up, and the betting control, which is set as a single amount with plus and minus controls.

Because there’s a sixth reel, we have a 6-symbol pay-line.

The pay-table auto-adjusts to the stake you have in play.

The low pays are introduced with card symbols:

There’s a lot of bonus action on this game:

There are four wilds, one for each card suit, that act in the standard way to create bigger wins.

The Wild Monkey takes low-paying symbols off the reels and triggers a re-spin with just high payers. It does not appear during free spins.

Wild Ships are giant wilds that can appear with multipliers after the treasure reel has been unlocked.

That is triggered by collecting map symbols, adding a sixth reel, with those much bigger pays, that remains on the screen unless you change your bet.

The free spins round is triggered with the Ocean Spins scatter symbol. The round introduces treasure chest symbols above the reels that are unlocked with keys on the reels. Unlock all three chests and you’ll get an extra wild and an extra spin.

This might be one ugly looking pirate, but we’re happy to sign up with him for whatever may come up. This game is great looking, sounding, and playing and is more packed with bonuses than a port is packed with ways of relieving drunk people of their money.

Almost any of the bonus features would be a great addition in its own right, but adding that extra reel, the choices of wilds, and a free spin round show Red Tiger are really generous. Hit your best pay-out with the biggest multiplier in place and you’ll cash in that £100,000 top prize.