Let’s get it out of the way: we love Thunderkick games, they’re innovative and fun and kick visual ass (and gameplay ass, and all other ass).

This Raven’s Eye slot game is beautifully built around a woman druid, who has – of course – a magical Raven. The setting is a forest clearing with an ancient structure in the background.

The symbols are mystically themed, and the druid and the raven are the ones players will be looking for.

The layout is slightly off-kilter, with four rows joining the four reels. As is usual with Thunderkick games you’ll find plenty of bonuses and interesting game-play theory, with stacking symbols, and a free spins round with an interesting sub-game within it.

This game is notable in featuring a female lead character who is not overtly sexualised or infantilised, and probably marks an effort by the developer to produce a game that women are more comfortable playing. And well done to them!

But should you fall under the spell of this druid?

Let’s take a look in our review.

Raven’s Eye is a creative and rewarding slot developed by Thunderkick.

When was the Raven’s Eye slot released?

What is the Raven’s Eye RTP?

The RTP (return to player rate stating statistically how much will the casino return to the player in the long run) is on the average side and stands at 96.10%.

Raven’s Eye slot comes with 5 reels and 4 rows. The wins are formed by matching symbols across 30 active pay lines starting from the leftmost reel to the right.

The theme of the Raven’s Eye slot is magic and nature.

Raven’s Eye slot is optimized for mobile devices so you can freely enjoy this slot on your smartphone as long as you have a stable internet connection.

What is the Raven’s Eye variance?

Raven’s Eye slot can be put in the medium variance category.

This slot is pretty affordable for all kind of players as the betting scale starts at a minimum of 10p per spin up to the max of £100. The max prize to be won in this game goes up to x1,761 the total bet.

Raven’s Eye slot comes with Free Spins and Raven Mystery symbols. The latter will transform into other symbols as well as wilds and enhance winning chances. The Free Spins Bonus awards 10 free spins and you get to collect Raven Orbs to fill the symbol meters which will transform symbols into Mystery symbols for the rest of the round. The full meter also awards 3 extra free spins.

Is there anything else that I should know about the Raven’s Eye slot?

If you play with the highest stake and have the luck on your side to collect all the high-paying symbols you can win up to the massive £176,100 prize!

For fans of magic-themed slots there are plenty out there they can try out. Aladdin’s Treasure slot or Triple Raven are just some of them. On the other hand, if you want to explore more of the Thunderkick slot collection then you can also try the exciting Midas Golden Touch slot that comes with a lucrative Free Spins Bonus or Beat the Beast: Mighty Sphinx which is one of the three slots from the Beat the Beast series.

Thunderkick are Swedish, and they are part of a new generation of developers that have really made the running in gaming innovation in the last few years.

They were founded in 2012, and now have bases in Stockholm and Malta, and their own servers.

They deliberately aim for “high-end productions” and it usually shows. You’ll find Thunderkick games around the online casino world.

The company has licenses in the UK and Malta, two of the best regulators in the world, and for UK players the UK Gambling Commission licence is a must-have.

Thunderkick has just 36 slots listed by the standard UK market auditing site at the moment, but they’re quality games. Their current top title is Fruit Warp, and this title is currently their third most popular one.

This Raven’s Eye slot game was released on June 2016, and it plays on all desktop, mobile and tablet devices that allow you to use JavaScript and HTML5.

The game has an RTP of 96.1%. That’s probably at the low end of the current industry average, but really only very marginally so. The theoretical return to player is a measure of a game’s performance over its entire history (and based on a certain number of idealised behaviours) and shouldn’t be taken too seriously.

The top prize is a very generous, 176,100 coins. That can be won from betting with stakes that run from 10p to £100. (Make sure you check the coin values, top prizes and other regs at the site you’re using.)

The five-by-four set-up is slightly out of the ordinary. It has 30 pay lines. 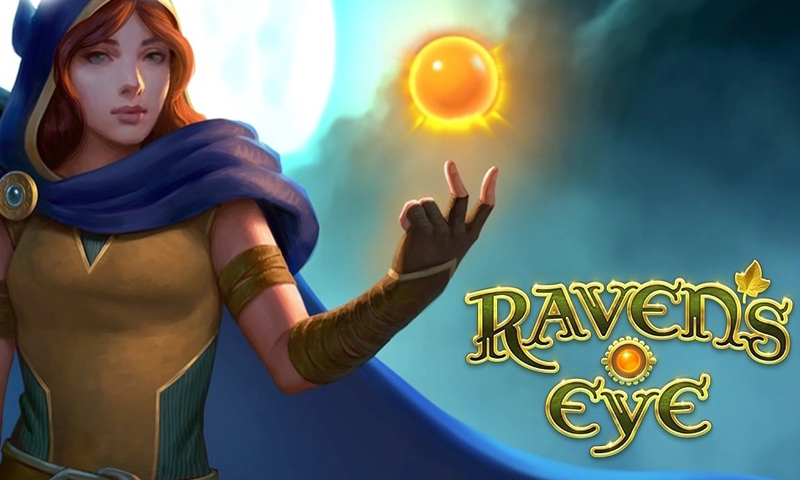 A feature of Thunderkick games is their elegant control setup, and here that’s in full effect.

The spin button floats at the bottom right of the screen, next to it is a sophisticated Autospin feature, and next to that is a chip button via which you set your bet. To the left of the screen, there is a menu and a sound control button. The menu button opens up to offer you a further settings menu and a cup icon to open up the paytable and simple game rules.

The paytable automatically calculates to your current bet.

At the top of the table is the druid, and she pays 12.5-times stake for a full set. The wild is a W and that pays the same amounts.

There is also a raven symbol that triggers bonuses from the base game.

Three raven scatters trigger a free spins game. During this game they take on another function, collecting symbols to fill a meter. When the meter has filled the symbol it represents, becomes a mystery symbol for the rest of the free spins round, and another three spins are awarded to the player.

But this is the simplicity of elegance, and this game is astoundingly good looking and smooth as all hell. It also has an excellent soundtrack that only adds to the magical and mysterious ambience that a world of druids demands.

Can we find any setbacks with this game?

The help feature was a little poorly written, and it’s almost easier to understand the game just by playing it (always remember to check out games in demo mode first if you get the chance, playing for free is always safer). And the Thunderkick system of symbols isn’t universal, so it might take you a couple of clicks to sort out exactly where you’re going.

But beyond that this Raven’s Eye slot game really is magical, and we congratulate Thunderkick on trying something different and providing a female character that isn’t going to send actual young women running for the hills.

Great game from a great company, we recommend you take a trip to your favourite online casino site and give these magical reels a spin now. The Raven is a good luck omen here and we hope it perches on your reels.