Push Gaming are a UK based company with London offices, a real rarity in this business. They’ve also got an interesting mission, which is to take games from the bricks-and-mortar world and bring them to online players.

They’ve been doing this since 2010 and currently have 32 titles on the UK market, with Blaze of Ra and Jammin Jars among their bigger recent titles.

They’re licensed in the UK and the Channel Islands so you can play their games with confidence that you’ll get a fair and legal experience every time.

Razor Shark slot is a 2019 release from the company and it’s based around… sharks! It has nudges, a reveal feature, and nudging free spins as its main bonuses. Multipliers push up the prizes with the maximum multiplier coming up an incredible 2,500-times prize. This gives a possible top prize of 50,000-times stake.

The game is set in the sea, with a shimmer effect as if you’re floating down there spinning the reels.

The set-up and much of the game mathematics is very standard, but this is a good looking game with great visual and audio effects.

You can play it on any device, but should you swim with the sharks?

You can play Razor Shark at these online casinos:

What game provider is behind Razor Sharks?

Razor Sharks is by Push Gaming, a 10-year-old developer from the UK. Jammin’ Jars and Blaze of Ra are their most popular slots, followed by this title, and then Wild Swarm and Tiki Tumble.

The company’s most recent releases are Jammin’ Jars, Fat Santa, Immortal Guild, The Shadow Order, this title, and Joker Troupe.

Coming up from Push Gaming are Mystery Museum, Wheel of Wonders, and Mount Magmas.

When was Razor Shark slot released?

What is the Razor Shark RTP?

The theoretical return to player is a measure of how a game will perform over its lifetime, it is the antagonistic complement to the “house edge”, and measure of how much of the money put into a game should be returned to players. It is not a failsafe guide to how your game will go.

How many reels and pay lines does Razor Shark have?

Razor Shark is a 5-by-4 game, which means there are 5 reels and 4 rows of symbols showing, giving players a field of 20 symbols on which to play.

There are 20 pay-lines on Razor Shark.

What theme is used in the Razor Shark slot?

Razor Shark is an underwater or fishing themed game.

Can I play Razor Shark on mobile?

Razor Shark can be played on any mobile (or desktop or tablet) that supports JavaScript and HTML5.

What is the Razor Shark variance?

Razor Shark is a high variance (or volatility) game. Again, you shouldn’t expect this to be a perfect prediction of how your game experience will go, but the broad meaning of high variance is that a game will pay out bigger prizes but will pay them out less often.

Does Razor Shark have free spins and bonus rounds?

Razor Shark has a free spin round and several bonus features in the base game, including mystery stacks, nudges, and reveals. Free spins include mystery stacks and a multiplier.

Is there anything else I should know about Razor Shark slot?

There is no jackpot in this game. 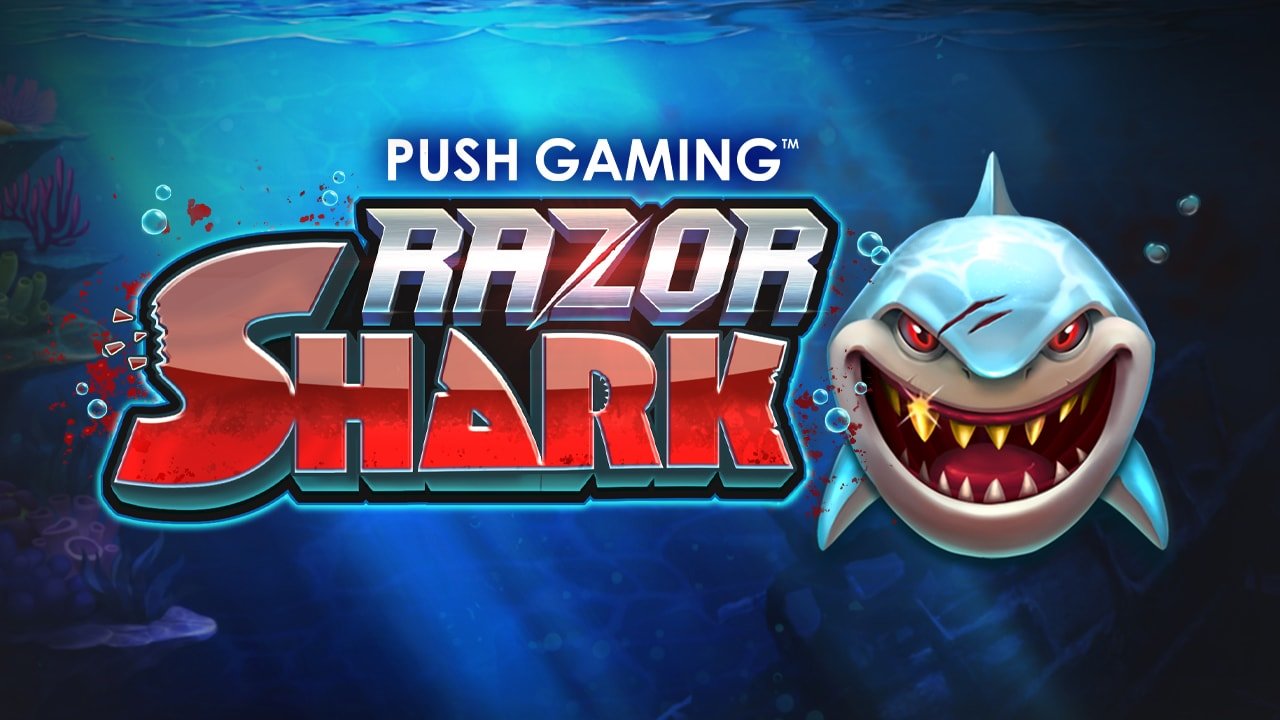 Razor Shark is a game that is easy to play with a standard set of controls set up for the mobile world.

The reels include these symbols:

Mystery Stacks use a seaweed symbol that stacks in sets of four. It sets off a nudge and reveals a feature that is a respin, with the seaweed nudging down the reels one by one until they leave the reels.

If the mystery seaweed symbol becomes the orange shark then the Razor Reveal feature is triggered, turning new orange shark symbols into scatters or multipliers, with a maximum of 2,500-times on multipliers.

Three scatters means free spins, with mystery stacks on reels 2 and 4. A multiplier goes up by 1 for each nudge. The feature can be retriggered.

Razor Sharks slot is a game you should load up and give a spin.

The theme is well delivered with fun graphics and a decent overall set of aesthetics. It’s a well-designed game that’s easy to play and to understand and it has good help and information features that are very easy to find.

We love the graphics and sound, which are fun and appropriate.

And the gameplay really kicks ace! Seriously, we love the mix of bonuses here, with valuable wins available via the base games and the bonus round of free spins.

That free spins round itself is very good indeed, with extra goodies all the way through. The use of multipliers is great, and it’s here that you might hit the big numbers that we all want to see.

High volatility games (also variability) are sometimes trailed as being unsuitable for new players, but this game has an interest in the gameplay as well as the possibility of hitting major prizes.

This game is of high quality and a great addition to Push Gaming’s catalogue. It’s been one of the company’s biggest hits and we’d be surprised if it didn’t spawn a sequel or two.