This guy is no squirrel or cartoon bear, so run like hell as the rhino joins the wolves, lions, sharks, and eagles that slot designers love to play with.

This rhino is the hero of an African-wildlife themed game from Blueprint, one of the world’s biggest games producers.

He, or she, is the big prize symbol, in a high volatility game that takes a load of basic elements (5 by 3 grid with 25 pay lines) and puts them against a savanna backdrop.

The top prize is 25,000-times stake, which is very generous indeed until you notice that the top stake is just £10. It’s fine for most players to be spinning under that level – and we’d remind you to always play safely and with money you can afford to lose whatever your wallet looks like – but many big prize games have much higher staking limits.

This game hasn’t been around for very long, but, despite looking a little like a number of other wildlife-themed games, has landed very well.

So should you join the prize stampede?

What game provider is behind Rhino Rampage slot?

This game is from Blueprint, who are an enormous company with 200 slots on the UK market, 193 of them classified as video slots. The company has been around since 2001, and they make regular releases that are guaranteed visibility in UK markets. Their most popular titles are Fishin’ Frenzy Megaways, Fishin’ Frenzy Jackpot King, Wish Upon a Jackpot Megaways, Diamond Mine Megaways, and The Goonies. This game is already ranked at 862 in the UK.

When was Rhino Rampage slot released?

What is the Rhino Rampage RTP?

The theoretical return to player of this game is 96.28%. That is slightly above the average in the UK market and very acceptable. Please remember that this is only a theoretical figure though, not a prediction of how your game will go. The figure is arrived at by spinning a massive number of simulated spins, and it is audited but it also expects players to make certain decisions.

How many reels and pay lines does Rhino Rampage have?

This game plays on a standard 5 by 3 grid, with 15 symbols in play, and 25 pay lines running across them.

What theme is used in Rhino Rampage slot?

This game is themed on African wildlife, safari animals, Africa, and it has cartoon graphics that are realistic.

Can I play Rhino Rampage on mobile?

You can play Rhino Rampage on any device that supports JavaScript and HTML5.

What is the Rhino Rampage slot variance?

The variance on this game is medium to high. High variance, or volatility games, pay out higher prizes but pay them out less often. This is not an exact measure or a prediction and there is no industry standard for setting it.

Does Rhino Rampage have free spins and bonus rounds?

Is there anything else I should know about Rhino Rampage slot?

This game has mega symbols. 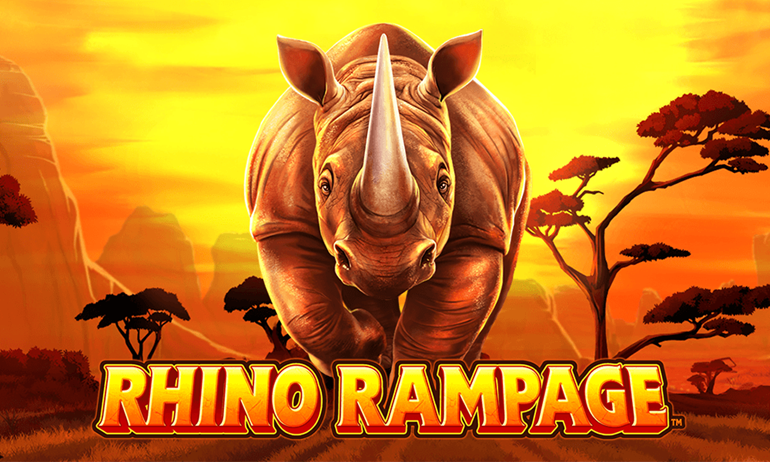 The game is really easy to play. A spin button floats to the right of the reels. Opposite it, a simple betting control lets you set your wager with a single control. Under that is the information button for everything else, and opposite that, on the right, is the auto spin feature, which comes with a lot of advanced settings.

Free spins come with three scatters. The feature has three colossal reels. If those reels are colossal moons then you win Lightning Spins. Lightning spins is an attempt to fill the reels with moons, with symbols locking in place, and awarding three cash pots.

This is a good looking game, that works smoothly, with a good, safe gaming experience on the books for everyone who signs up for this safari.

The design is really good. It’s actually pretty hard to produce convincingly drawn wildlife games, and this is a very good effort, the nice bits of animation help to bring life to the whole thing, and the soundtrack adds another layer of atmosphere.

The moon-triggered lightning spins will be familiar to players who have played the smash hit Wolf Gold, and it’s a shame that the main feature here isn’t a bit more original. Still, the reason that features get repeated is that they work and because players like them. Otherwise, they’d be retired.

Which brings us to Megaways. Blueprint have had their biggest hits lately with Megaways, but they’ve ditched Big Time Gaming’s wondrous win engine for this game. Although there’s a very good top prize, and high-ish volatility they’ve kept the betting levels low. That will surprise some players.

This is definitely a game that you should try, and with Blueprint games featuring so heavily around the UK online casino scene, you’ll no doubt get the chance.

The safari is very much on for us this summer.