This new Egyptian Rise of Dead slot game from Play’n GO, released in February 2019, is trailed as a sequel to Book of Dead, the company’s massive Egyptian archaeology hit. But where’s Rich Wilde? They’ve sacked poor rich, as the Pharaohs rise up and have their turn in the spotlight. No doubt there’ll be more work for Rich in future.

The game sticks to the successful formula though, with a 5-reel set up. The bonuses are based around wilds, as well as having a Free Spins round, with the potential for unlimited spins.

The graphics are great quality, and Play’n GO aren’t holding back on the theming here, which is deep and meaningful, and genuinely quite spooky!

The Rise of Dead slot game is new, but it’s pretty similar to the Gold King slot from 2018, and we’ll have to see what extras we find when we dig into this pyramid in a bit more detail.

What game provider developed the Rise of Dead slot?

When was the Rise of Dead slot released?

The rise of Dead slot was released in February 2019.

What is the Rise of Dead RTP?

The theoretical return to player rate is based on statistics and says how much will the casino return to the player in the long run. Rise of Dead slot has a bit lower than average RTP that stands at 94.54%.

The Rise of Dead slot comes with a standard reel structure. There are 5 reels, 3 rows, and 20 fixed pay lines across which the wins are formed with at least three matching symbols from left to right.

The theme of this slot is Ancient Egypt and it is probably the most popular theme in slots.

Yes, you can play Rise of Dead slot machine on your mobile (Android or iPhone) as well as any other device such as desktop, laptop, or tablet.

What is the Rise of Dead variance?

The Rise of Dead slot machine is a high variance game. It features big winning potential with big wins hiding in the Bonus round.

The betting scale in THE Rise of Dead slot starts at a minimum of 20p per spin and goes up to the max of £100 per spin. The top prize in this Egypt-inspired slot is x5,000 the total stake per spin.

Rise of Dead slot comes with Free Spins Bonus, random Gift of Gods Bonus, and Mega Stacks feature. The Ancient Free Spins round is triggered by script scatters and awards 10 free spins with stacked expanding symbols and re-triggers. The Gift of Gods feature triggers randomly and duplicate reels 1, 3, and 5 while the second and third reel will spin again to provide you with a chance to hit bigger wins.

Is there anything else that I should know about the Rise of Dead slot?

On each spin, one symbol will be chosen to appear stacked on the reels providing you with greater chances for better wins. With the max bet, the max win can go up to £500,000!

There are plenty of other slots similar to the Rise of Dead. If you like the concept of expanding symbols then you can try Magic Mirror Deluxe 2. If you also want to explore more of Ancient Egypt-inspired slots, you can check the most popular Book of Ra, Book of Dead, or Eye of Horus Megaways.

Play n Go – The developers of the Rise of Dead Slot

Play’n GO are one of the biggest slot companies in the world. They have nearly 200 slots currently listed on our favourite UK industry auditing site, and the releases keep on coming: the company has just unleashed Honey Rush, A Touch of Vegas, and Cash Pump. Their release Demon featured a whole new album from the classic British heavy metal band of the same name.

That shows you that Play’n GO are serious about their wish to innovate and produce exciting games.

The company also makes user-management and back-office software for companies who run slot sites and online casinos. That gives them extra power in the market, and it means at some sites their games are pretty much guaranteed to get a place in the lobby and the best visibility possible.

Play’n GO is headquartered in Sweden, but has offices in a number of international markets, and licenses to run games in 15 of them, including a UK Gambling Commission licence. The company, which dates back to 1997 making it a veteran in online slots terms, is the number 3 operator in the UK according to our auditor.

Their most popular slots are: the aforementioned Rich Wilde and the Book of Dead, Big Win 777, Fire Joker, this game, and Moon Princess.

Play’n GO is a high-quality, trusted slot provider and one whose games you can play with confidence.

The top prize on the Rise of Dead slot is a smashing 500,000 coins. This comes in a game with a theoretical return to player (RTP) of 96.25%. This is about average in the current market, though you should be aware that RTP is a very long term measure and might not be reflected in your interaction with the game. The high volatility or variance rating means that the game is slightly more likely to pay out bigger prizes but to pay them out less often.

This is a standard game set-up of 5 reels and 3 rows. Across the 15 symbols on the screen, there’s a grid of 20 pay lines. You can play this game as long as you have JavaScript and HTML5 running. 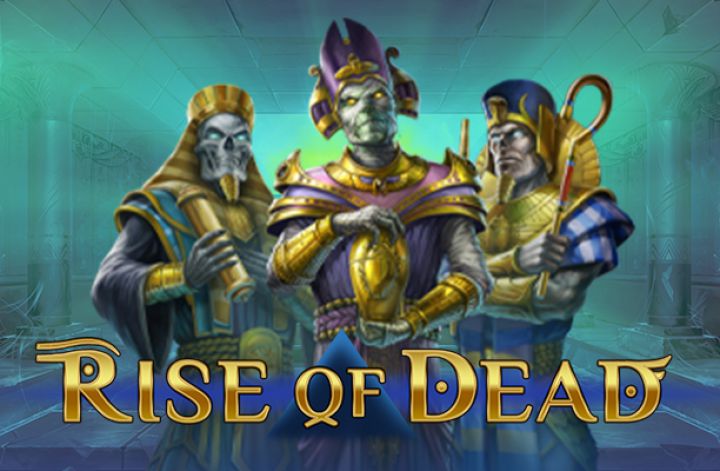 Play’n GO know how to put a game together, and you’ll soon know your way around this easy-to-use game.

At the far left of the screen, the information button opens up the paytable. To the right of that, your balance is displayed followed by a sliding scale that sets the total staked. Finally, the big, friendly green spin button is next to the auto-spin feature.

The scarab beetle, the wild, sits on top of the paytable, paying out 125-times stake and subbing in for all other symbols.

The base game comes with wilds-a-go-go!

A mega stacking feature works on each spin, with symbols expanding to 12-symbol height.

A Gift of Gods feature activates at random and fills odd-numbered reels with stacks of symbols that are sticky on wins.

Three scatters triggers the free spins feature. You start with 10 but can retrigger up to 10 more at a time with no limit on the numbers of retriggers.

Stake at the of the betting range here and you’ll see a top prize of £500,000 (always be sure you check top pay-out limits, coin values, and stakes while you’re playing). And that’s just the most obvious attraction of this great game. Experts who play a load of games might have spotted the similarity to an older title, but the truth is that game mechanics are a relatively stable commodity these days.

The theming here is far from unoriginal. While the Egyptian world has been covered time and time again, this is a really fantastic, dark and spooky take on that era of history, perfect for Halloween and the darker months of the year.

If you know Play’n GO games you’ll know you can expect good quality here. If you’re new to the scene then this is a great game to get you started. It is extremely high quality, with a lot of variety in gameplay and features, and you just might hit lucky and hit a major run of free spins or a big, stacking symbols win for that top prize.

High volatility means you may need to be a little patient, but if you are and you hit lucky then the sky’s the limit here.