The gods love nothing more than hanging around the slots universe! Nothing is more popular among slot developers than ancient mythologies and religions.

Fair enough, we’ve all got to have an interest (I like gardening), and Play’n GO are pretty much nailed on to provide a quality gaming experience whatever the theming might be.

Here it’s the Ancient Greek gods. Their gimmick here is a five-by-five grid, and a load of extras and bonuses, including a lot of gaming style features.

Oh yeah, and you could win a million pounds.

That’s what we call godlike!

The Rise of Olympus slot is a highly volatile game though. If you like this game then you’ll find a very similar experience, but with a female slant, in Moon Princess.

Are you ready to worship these divine beings though?

What game provider developed the Rise of Olympus slot?

Rise of Olympus slot is developed by Play n’ Go and it comes packed with action and features.

When was the Rise of Olympus slot released?

The rise of Olympus slot was released in August 2018.

What is the Rise of Olympus RTP?

Considering that it is packed with random and regular features, the RTP is a bit lower and stands at 94.51%.

Rise of Olympus slot is not a regular slot with pay lines. Instead of a regular layout, there is a 5×5 grid where at least three symbols are connected vertically or horizontally to form a win. The wins are followed by an avalanche but instead of regular symbols filling empty positions, the wilds come into play which also increases the win multiplier by x1.

Rise of Olympus slot is themed around Greek mythology. Hades, Poseidon, and Zeus are the Greek gods you will encounter in this amazingly-designed slot and each comes with a special bonus feature.

You can play Rise of Olympus slot on your mobile device as well as all other devices such as desktop, tablet, or laptop.

What is the Rise of Olympus variance?

Rise of Olympus slot is a high variance game packed with features and big winning potential. Most of the big wins will come in the Free Spins bonus.

What is the minimum bet and top prize?

You can start playing Rise of Olympus slot with a minimum stake of 20p per spin. The max bet is £200 and the slot has the potential of awarding up to x5,000 the total stake per spin.

The Rise of Olympus slot is packed with features, Free Spins included. There are three random features (by the three gods sitting next to the reels) that can be awarded after any non-winning spin. The Wrath of Olympus feature is played when you fill the meter by hitting wins with high-paying god symbols. It will award a free spin with one of the god’s features. The Free Spins bonus comes with three options: Hades, Poseidon, and Zeus free spins round.

No, Rise of Olympus slot doesn’t feature any jackpots.

Is there anything else that I should know about the Rise of Olympus slot?

Play with the max bet, and win big up to the max of £1 million if you get extremely lucky and beat all statistics.

If you want to check similar slots, then we have a few suggestions for you. You can try Moon Princess slot by the same provider featuring a 5×5 grid, cascading wins, multipliers, and numerous Bonus rounds just like in the Rise of Olympus slot. Also, the Age of the Gods slot by Playtech is worth checking out as it comes packed with action and big winning potential.

The Developers of the Rise of Olympus Slot

Play’n GO are is a massive developer, and the industry figures we use (which ranks developers by visibility and popularity) rate them as the third biggest developer in the UK market.

That’s on the back of more than 200 games in total, including 162 slots, alongside some other styles of games, taking in table games, and scratch cards.

You’ll find a load of Play n GO games wherever you play and go, particularly if you like mobile games because they’re award winners in this segment of the market (as they are in others).

Play’n GO has been an independent entity since 2005, but the people behind it are long-time industry veterans.

The stand-out hit from Play’n GO at the moment is Rich Wilde and the Book of Dead. The Rich Wilde series is wildly popular. It’s based on an Indiana Jones-alike character and it’s a favourite free-spins offer game all over the UK casino scene.

Play’n GO are licensed, audited, and completely trustworthy. You can play these games with confidence.

The first figure in most of these reviews is the theoretical return to player. Here it is 94.51%. This is lower than the current industry average, which is about 96%. However, you shouldn’t let this put you off. This is partly the function of a couple of other aspects of this game: its high volatility and its big top prize.

Volatility measures prize frequency against prize size and high volatility games are more likely to give large prizes, but with payouts coming less often. The top prize is £1 million, and that also impacts on the RTP. You should also remember that theoretical return to player is a life-time measure of a game.

The Rise of Olympus slot game is played on a 5 by 5 grid, with multiple ways of winning. You can play this August 2018 release on any device that runs HTML5 and JavaScript. 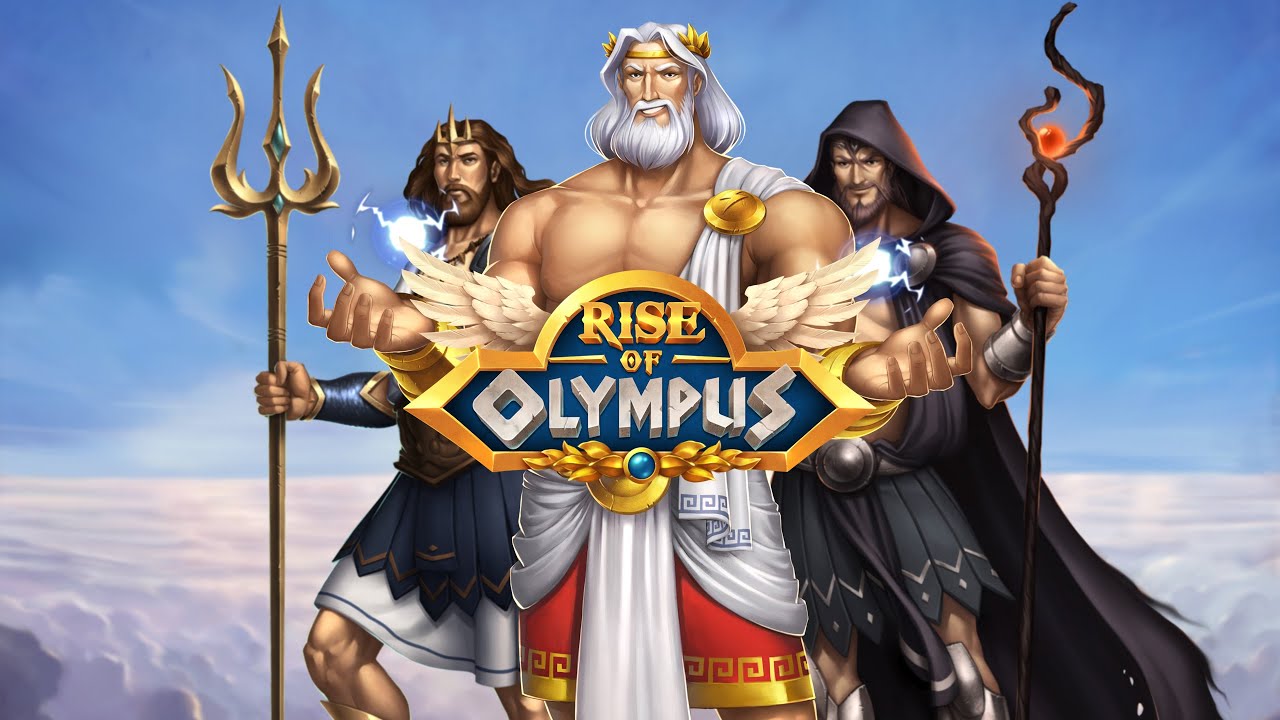 Have you played a Play n GO game before? If so, you’ll know this setup.

At the left of the control panel is an information button that opens up the paytable. Then a window shows your balance. Betting is set via the total stake, which is on a sliding scale, with the amount shown to the right of this. Then there’s a spin button, with the auto-spin function to the right.

The game frame contains more controls, including menus, sound, autoplay, and more help options. Do take the time to read the rules before you play any game.

The paytable opens with a set of symbols operating as a sort of Greek version of card suits. They are:

You want to play bonus games, don’t you? That’s where the big prizes are to be found, and here’s how they work.

The base game is novel, with a cascade symbol giving respins on every win. A wild appears in the centre of the grid with multipliers appearing on subsequent wins in the sequence.

The Hand of God feature is randomly triggered. There are three versions of this, depending on the god who is active on the side of the reels.

The Zeus feature takes out two symbols and replaces them.

The Poseidon feature adds up to two wilds.

The Hades wild updates a whole set of symbols.

The Wrath of Olympus feature is triggered via a meter that is stocked up with god wins. A full meter gives you a free spin and sets up a sequence of the Hand of God features.

Rise of Olympus free spin rounds is triggered by an empty grid and comes with three god-like variants.

There is a multiplier on the free spins round that can rise as high as 100-times. The feature retriggers to a maximum of 20 free spins.

There’s a lot to take in in this game, but you’ll soon be on top of it. As ever, Play’n GO has delivered a high-quality game that’s easy to play and easy on the eye and ear.

The bonuses are strong, and although this game is highly volatile there are extras and features all over the place. And when you hit the jackpot of free spins and big multipliers then you could see life-changing wins (a million pounds would change my life, I don’t know about you!).