Santa vs Rudolf slot is a Christmas game from NetEnt.

It’s not a completely new game, as NetEnt have put new graphics and sound on an existing slot called The Invisible man in order to get a Christmas hit.

There’s nothing new to that. If you liked that game then you have a shortcut in this Santa vs Rudolf slot review, because you should like this one too.

Here, instead of the classic horror and sci-fi character, we have the world’s favourite delivery man (not connected to Amazon – yet, it’s only a matter of time!), and his most famous helper, Rudolf the Red Nose Reindeer.

Rudolf is going loco and Santa’s tired of running around the world with parcels. We’ve all been there.

The look is quite simple and graphical, but, despite the cash-in release schedule, there’s some depth to this game, which is towards the top end of the prize scale.

What game provider developed the Santa vs Rudolf slot?

Santa vs Rudolf slot is a holiday game developed by Net Entertainment.

When was the Santa vs Rudolf slot released?

Considering that this is a holiday slot, it is only natural that NetEnt releases it before the holidays which is what happened. Santa vs Rudolf slot was released at the end of November 2019.

What is the Santa vs Rudolf RTP?

Santa vs Rudolf slot comes with an average return to player rate (RTP) of 96.35%.

This is a slot with a classic layout. There are 5 reels, 3 rows, and 20 pay lines. The wins are formed by matching symbols on active pay lines and it goes both ways from left to right and from right to left. This leaves you with more chances to create wins in the game.

Santa vs Rudolf slot is a holiday/Christmas-themed slot machine. With the sharp and cartoon-styled design, the slot is set on the snowy background with quirky Rudolf and Santa set on each side of the reels. But there are some pats between them and it is fun to watch.

Yes, you can play Santa vs Rudolf slot on your mobile devices such as Android or iPhone.

What is the Santa vs Rudolf variance?

Santa vs Rudolf slot has medium to high variance. There are big wins hiding in the game, but it won’t be that easy to catch them.

The minimum you can stake in Santa vs Rudolf slot is 20p per spin. The top prize here goes up to x500 per spin. Since this is both ways pay slot this means that the top prize is x1,000 per spin.

No, Santa vs Rudolf slot doesn’t feature any jackpots.

Is there anything else that I should know about the Santa vs Rudolf slot?

The top prize of x1,000 is possible if you manage to fill the screen with the top-paying Santa symbol so keep an eye on Santa and you may get your early Christmas present.

If you like the gameplay of this slot, you can also try Jack and the Beanstalk slot by the same provider that comes with similar features such as walking wilds and Free Spins. And, if Christmas slots are more of your interest you can also play Fat Santa or Book of Christmas slot.

NetEnt – The Developers of Santa vs Rudolf Slot

NetEnt are nearly as big as Santa!

OK, an exaggeration, but a pardonable one. NetEnt are a huge company. They have more than 300 slots currently available to UK players. And their market reach is enormous. NetEnt games are worth getting on for a fifth of the world’s slot market and not far short of a third in their key markets in Europe.

NetEnt produce games at quite a lick and work with a number of other partners to deliver new titles. And they keep winning awards for these games.

The company is licensed and safe to use, and their games are among the best-loved in the UK.

Starburst is their biggest hit, and it is – using the audit site we trust – rated as the UK’s number one slot, and has been for a long time now. Gonzo’s Quest is consistently rated in the UK’s top 10 despite being on release since 2011 and is a mainstay of free spins offers.

NetEnt games are available in pretty much every casino site, and certainly in the sites that the company runs.

We mentioned the high prize potential of this game. That is because it is rated as having high volatility. Volatility, also called variance, measures the size of prizes against the frequency with which they are paid out. Most games are medium, Santa vs Rudolf is medium-to-high, which means that the game is slightly more likely to pay out bigger prizes but to pay them out slightly less often.

The theoretical return to player is 96.35%. This measure is a lifetime assessment of how much money a player will come back from a game. It is not an exact measure of how you will do in a single session. The rating for Santa vs Rudolf here is very much in keeping with the industry average at the moment.

The game operates on a standard reel set up of five reels and three visible rows, giving a game area over which 20 Betways run, doubling up to 40 pay lines by running both ways.

Play Santa v Rudolf on any device that supports JavaScript and HTML5. 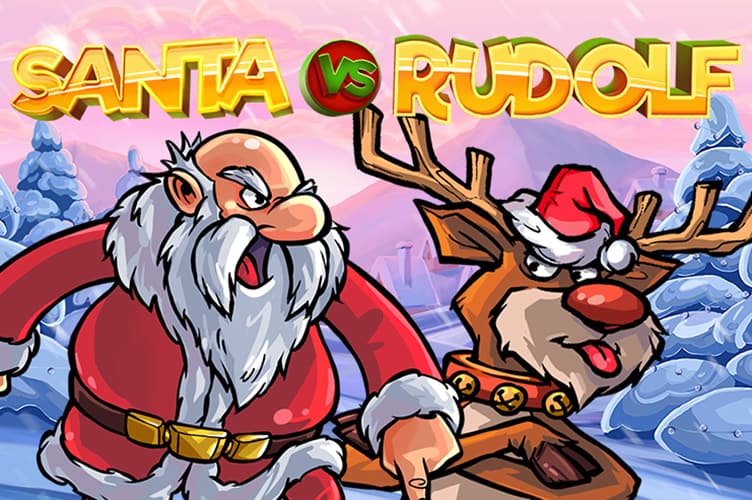 The game is simple to play.

The look is modern, with a floating control panel at the bottom of the screen that opens up with a three-line menu bar at the left. To the right of that is the chance to set your bet total via a coin value selector.

Make those reels spin via a central control of spin and autoplay.

Wins and balance windows are to the right of this. Other controls, including sound control, are in the game frame.

The paytable is Christmassy, in the cartoon style, with cards made of candy canes at the bottom paying as much as 5-times stake for a set of five.

There are also bonus symbols on the reels.

Santa and Rudolf are walking wilds, each landing at one extreme of the reels and walking across during a respins feature.

The main bonus is a free spin option. This is triggered when the wilds appear together and meet. This triggers 10 free spins, with possible retriggers (with extra availability of the wilds) up to a total of 30.

Meters above the reels in the base game count up the wild appearances and can trigger a set of bonuses:

Santa’s Gifts – a prize pick with cash and multipliers as prizes.

The top prize here is a possible £400,000. That’s a hell of a Christmas present and rather explains why this game has hung around so long into the New Year. And, as we are with our Christmas cards, we’re always late!

The game is quality and delivers in the usual NetEnt style. It’s easy to play and offers a great set of bonus features.

Is there anything to criticise? Not a great deal. We’re not a big fan of this style of graphics, and the sound isn’t particularly to our liking either, but you can always mute that.

If you enjoy this game then go right on ahead and check out the Invisible Man the game that says, “I am your father” to Santa vs Rudolf.

Cross your fingers and write Santa a nice letter and you could get a prize delivery that will change your life down your chimney with this classic NetEnt game. That’s got to be worth a try at your favourite online casino site today.