This is not quite a slot, but it’s a Slingo – a sort of hybrid of slots and bingo games – that is based on one of the most famous and popular of all slot game families, the Rainbow Riches titles from Barcrest.

Rainbow Riches games are super-traditional slots based on the old and reliable Lucky Irish theme. Red and green and bright are the colours! Hornery and old are the clichés about Irish life!

And players love it!

We’ll go into Slingo more fully later on, but it’s a style of game made by one company, Slingo Originals, who are behind this title.

We’re going to treat this Slingo Rainbow Riches slot game as we do ordinary slots and we hope you’ll consider checking out this style of game.

But should you choose this particular title?

When was the Slingo Rainbow Riches slot released?

What is the Slingo Rainbow Riches RTP?

The return to player rate (RTP) of Slingo Rainbow Riches is around the average and stands at 95.6%.

Slingo Rainbow Riches is a mix of bingo and slots. It comes with a standard 5×5 grid and 12 bet ways. You need to match your numbers on the grid with random numbers below the reels. Once you get the same numbers, it will turn into a star. More hits and you get to progress up the levels and win various features.

The theme of Slingo Rainbow Riches is Irish luck. This Slingo game stayed truthful to the original Rainbow Riches slots so you will find the similar design as well as similar features in the game.

What is the Slingo Rainbow Riches variance?

Slingo Rainbow Riches is a medium variance game. There are plenty of features in the game and there will be frequent decent wins while bigger ones will take a while to catch.

Slingo Rainbow Riches comes with plenty of bonus rounds that are the ones you will see in Rainbow Riches slots. There is no regular Free Spins Bonus, but there are as many as 4 special symbols and 7 Bonus features. Pick of Gold and Road to Riches Gold are the most lucrative ones where you can hit the top prize of x1,000 the total stake.

Is there anything else that I should know about the Slingo Rainbow Riches slot?

Play with the highest stake, and the max award you can win goes up to the massive £200,000!

If you like Slingo games, you can try Slingo Maximus or Slingo Centurion by the same provider. On the other hand, if you want to enjoy regular slots, then make sure to explore the Rainbow Riches slot series with dozen of different titles with the famous Leprechaun as the main character.

Slingo Originals make only this style of game.

The company is old, with a foundation date of 1994 making it one of the most venerable of the slot companies we deal with.

The company is popular too. It not only makes Slingo games, usually versions of existing slots, but also makes its own slots.

It has 17 Slingo games, 20 slots games, and two card games on its books.

The title in this review is the most popular of the company’s titles at the moment, followed by Slingo Extreme, Slingo Centurion, Hot Stepper (a classic slot), and Pigasus and Friends, another slot.

The company does well and is ranked as the 14th most popular slot company in the UK online casino market. Unsurprisingly, the sites that are most likely to stock Slingo games are bingo sites, and your best bet for finding a number of these titles is to visit City Bingo, Dino Bingo, Wink Slots, Farmyard Bingo, or Angry Bingo.

Because this game is not a typical slot game it’s not possible to have a full set of figures that we have for most other slot games.

We do have a theoretical return to player. This is 95.6% or a house edge of 4.4%. This figure represents what percentage of the money that is gambled on the machine is likely to pay back to players. These measures aren’t precise and, for example, calculate on the basis that players will behave in a particular way (in practice, machines often take more money than expected).

There is an equivalent of 12 pay-lines on the game.

You can play this 2018 release on any device that runs JavaScript and HTML5. 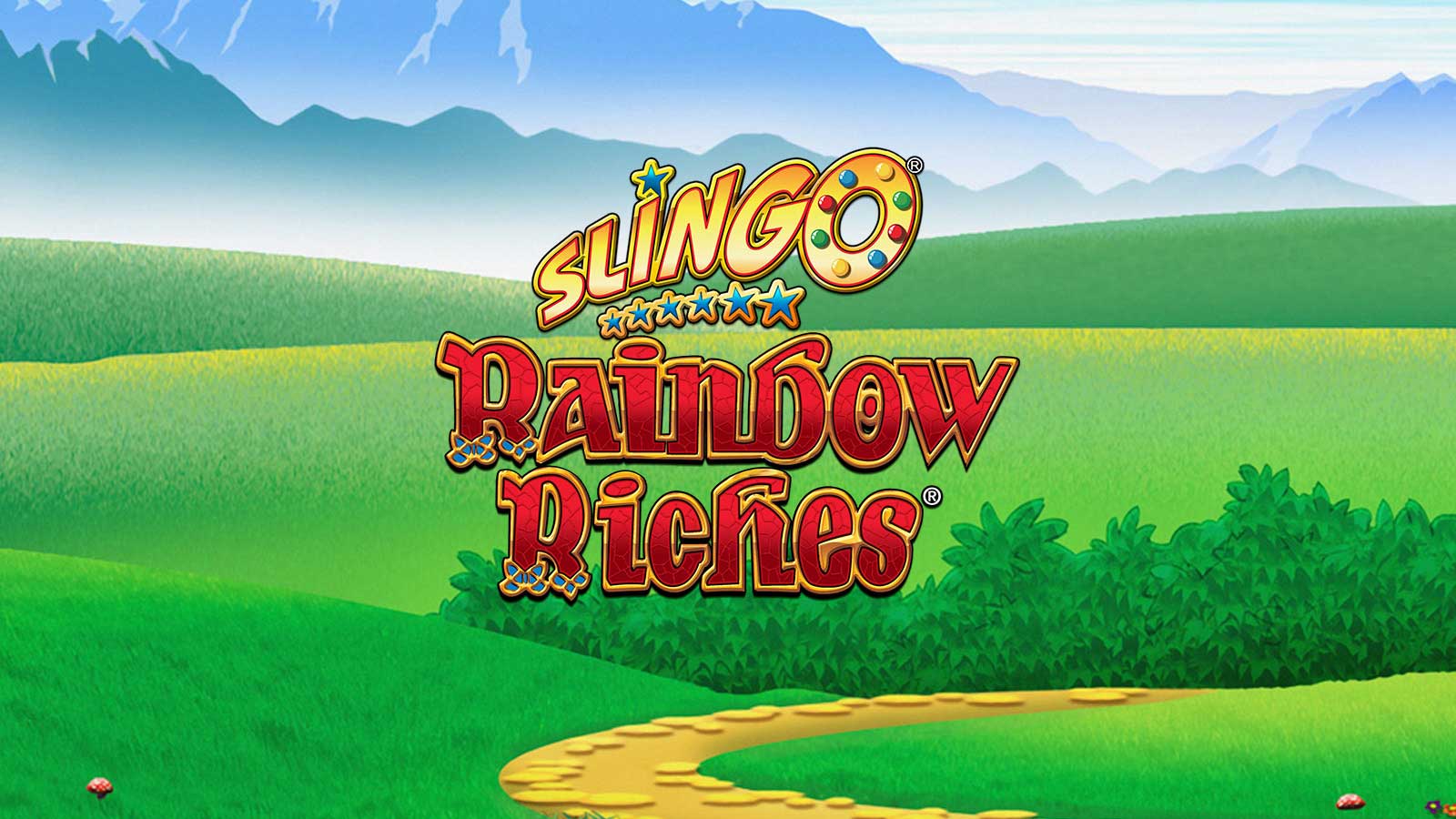 Slingo is somewhere between a slot and a bingo game.

It has a bingo card, and numbers that are produced in sets of 10 that you buy like bingo tickets.

The card is a 25-number field. The numbers are random.

To the left of this is a ladder recording wins, from 1-line up to a full house, in the bingo-style. You can fill up to 12 lines – running in any direction – with the final number filled always completing at least two lines.

You win as you complete lines.

First, you need to buy 10 spins at a stake set by the game.

This gives you the chance to spin a reel that runs under the bingo card. As random numbers appear on this reel you can mark them off your card. A joker works like a wild, allowing you to pick any number on the row above it.

Some win lines trigger bonus games: these are the same bonus games that appear in the rainbow riches slot.

Once you’ve completed a set of 10 spins you can buy more to try to fill in more squares on the grid, or you can collect the bonuses that you’ve won and play them for prizes.

There aren’t symbols in the way that there are in a normal slot game in Slingo games.

This is a game you definitely need to play to get a handle on as it’s so different from most slots. That’s not to say that it’s confusing or difficult to understand – take a quick tour of the rules, or read our review above in full and you’ll soon be playing with confidence.

It’s a different sort of experience though and one you’ll need to try if you know that you like it or not.

We like it. It’s a bit more laid-back in style than a slot, but the on-going structure of the game gives you a sort of narrative push.

Try it and see!