Great Train Robberies are an interesting and important cultural phenomenon. There have been a number of heists that have claimed that dubious crown – in the UK and the USA, and a load of cultural ephemera attached to them, from movies to books, games and beyond.

And now, Red Tiger try to go beyond a merely Great train robbery and skip a greater train robbery to give us The Greatest Train Robbery slot.

The style here is very much that of the Old West cartoon aesthetic that’s big in online video slots, but rather than mining for money these cartoon avatars have strapped on their guns and are trying to line their pockets with purloined gold from the good old gold express.

The style extends to railroad track reels, with trains running that get loaded with symbols.

Behind all that, there’s a relatively standard slot though, and one no experienced video slots fan should have any trouble playing. There are three bonus features to get stuck in to.

Should you join up with this gang and take the road to railroad robbery?

When was The Greatest Train Robbery slot released?

The Greatest Train Robbery slot was released in June 2019.

What is The Greatest Train Robbery RTP?

The RTP of The Greatest Train Robbery is 95.02% which is slightly below the average.

The Greatest Train Robbery slot comes with 5 reels, 3 rows, and 40 pay lines. You need at least three symbols on an active pay line to hit a win.

The Greatest Train Robbery is a Wild West slot that will take you on a wild adventure to the West. The design is cartoon-styled and simple.

Yes, you can play The Greatest Train Robbery slot on your mobile device as well as other devices such as desktop, tablet, or laptop.

What is The Greatest Train Robbery variance?

This is a medium variance slot with frequent smaller wins. This slot has the potential to provide big wins, but they won’t appear that often.

You can start spinning The Greatest Train Robbery slot from as little as 20p per spin. The max bet is £40 per spin. This slot can provide prizes up to x2,000 the total stake.

No, The Greatest Train Robbery slot doesn’t feature any progressive or fixed jackpots.

Is there anything else that I should know about The Greatest Train Robbery slot?

If you want to head to Wild West and explore more slots with this theme, there are a few we can recommend. NetEnt’s Dead or Alive 2 slot is the most popular game with this theme and with high volatility and wins up to the massive x111,111 the total stake it is no wonder it is at the top. Money Train 2 is another great game with wins up to x50,000 in the Free Spins.

The Developers of The Greatest Train Robbery Slot

Red Tiger aren’t one of the giants of the casino world, but they are a big, reputable company with lots of titles, including some very popular ones in the UK market.

The company is new and was only founded in 2014. They’re based both in Europe and Asia, where the big, growing online markets are. They actually claim to have psychologists on their team, which is either interesting or concerning depending on how you look at things.

Registered in the UK, which is essential for UK players to say. They are also registered in Malta, one of the world’s biggest gaming regulatory jurisdictions. They have a third licence in Alderney, an off-shore part of the UK that also – for tax reasons largely – registers a lot of gaming sites.

The figure most players want to see is the theoretical return to player. And in the case of The Greatest Train Robbery slot, that figure is 96.03%.

Well, that’s about average, and represents a “house edge” of 3.97%. The reality is that unless this figure is wildly out of kilter with the industry standard, which is between 95-97%, then it is very unlikely to be something that you will notice when you play. RTP measures the expected performance of a game over its lifetime and relies on the player behaving in certain ways.

The same can be said for the volatility here, a rating that is created from the relationship between the number of wins and the size of the prize. This game is rated as “medium volatility”, so you can expect an average experience.

The top prize is 80,000 coins. Betting is from 0.2 coins to 40 coins, and that should translate to 20p to £40 in UK money, but please make sure you have checked all the figures at the site you are using.

The five-by-four layout is slightly out from the standard. Forty pay lines are crisscrossing these 40 symbols.

The Greatest Train Robbery slot, which was released in June 2019 can be played on any desktop, mobile, or tablet device that supports JavaScript or HTML5. 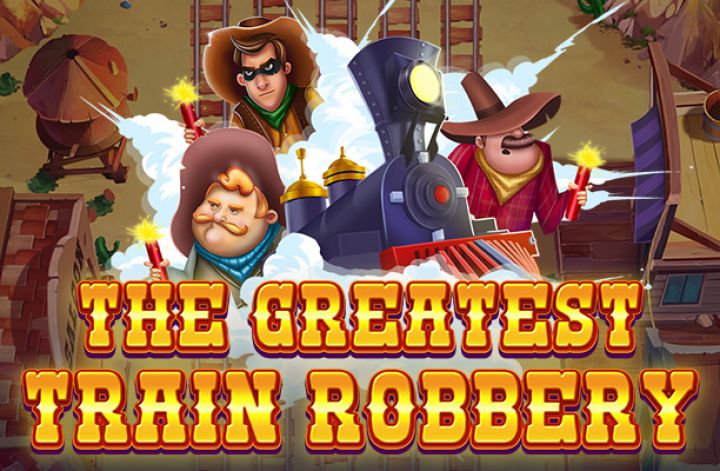 The game has jazzed up the symbol delivery and presents as a bird’s eye view of a train, but the controls are very familiar.

A big orange spin button sits to the right of the screen, with the turbo mode option next to it. You set your stakes to the left of the playing area, where you can also set the details for your auto spins.

Most of the rest of the controls: sounds, screen size, notifications, and menus, are presented as icons in the top right of the screen.

It’s a simple and elegant presentation and will be easily understood by any player with any experience of online video slots.

Click up the paytable and you’ll see a good mix of western symbols.

The base game delivers a couple of bonus features.

The robbers can appear at random, chucking dynamite at the train – in an act of domestic terrorism if you want to be picky here – and activating a Bandit Bonus.

There are a respin of at least one reel to create new wins. A fire that spreads wilds across the reels. And a mystery symbol feature that turns smoke-hidden symbols into winning combos.

The main bonus is a free spin, triggered by the safe scatter landing in threes. These award random numbers of free spins, with the possibility of extra Retriggers via the bandits in the game.

Great fun and good value, what’s not to like about The Greatest Train Robbery slot?

Alright, well, we don’t like the graphic style, but that’s probably just us. If you don’t like that old West cartoon style then, what can we say!

Board up at your local online casino site now!