This one is ancient! Not just in its theming – based on Viking-style Scandinavian myths and legends – but also in its age. This Thunderstruck slot game was released in 2004.

And yet, it remains popular and played by lots of players. In 2019 it was recorded in well over a third of UK casino sites.

That’s a great record for a game in an industry that is obsessed with novelty. That is something of a chimaera though. The fact is that the shells of games change an awful lot, but the underlying machinery of most online video slots wouldn’t puzzle a time-traveller from any casino from about the 1960s onwards.

So Thunderstruck slot has earned its place in the pantheon of games. It’s slightly old-fashioned looking, but there can be no doubt that Thunderstruck casino slot delivers an experience that players like, with its free spins and multipliers offering prizes that are very up to date.

But should you get out your thunder hammer and get striking?

Let’s have a look in this Thunderstruck slot review!

The Thunderstruck slot is one of the most popular slots developed by Microgaming.

When was the Thunderstruck slot released?

The Thunderstruck slot was released back in May 2004 and it is popular among players even today.

What is the Thunderstruck RTP?

The theoretical return to player rate for Thunderstruck slot is 96.1%.

This slot comes with a standard reel layout. There are 5 reels, 3 rows, and 9 fixed pay lines. To form wins you need at least three matching symbols on an active pay line from left to right.

The slot is themed around Norse mythology so you will find glorious Norse gods in this slot such as the mighty Thor who is wild and will help you out with your wins.

Yes, Microgaming made sure to optimize its popular Thunderstruck slot for mobile devices so you can enjoy it on your smartphone wherever you are.

What is the Thunderstruck variance?

This is a medium variance slot machine.

You can start playing Thunderstruck from as little as 1p per spin which is just perfect for low-rollers. The top prize in Thunderstruck slot goes up to 10,000 coins on a single spin.

The Thunderstruck slot comes with only one feature, that is, the Free Spins Bonus that can be pretty lucrative as all wins in the bonus round will be subject to an x3 multiplier. The Free Spins round is triggered with 3 scatters and awards 15 free spins. The Thor wild symbol multiplies the wins by x2 in both base and free spins game.

No, there is no jackpot in this game but the max theoretical payout of this game can reach 130,000 coins.

Is there anything else that I should know about the Thunderstruck slot?

Thunderstruck slot features a Gamble option where you can double or quadruple your wins by playing a risk card game.

If you like the Thunderstruck slot machine, then you should also try its sequel Thunderstruck 2 slot that comes with an upgraded feature, that is, as many as 4 Free Spins Bonus with different in-game features. Also, if you like mythology-inspired slots, you can try Zeus by WMS or Fortune of the Gods by Playtech.

Microgaming – The Developers of Thunderstruck Slot

Microgaming are behind nearly 500 slots in the market at the moment. Their slot games appear in nearly 500 casino sites in 24 countries.

The company is based in the Isle of Man, a part of UK territory with slightly different laws from the mainland. The company is owned by Apricot Investments Ltd.

Microgaming are fully licensed by the UK Gambling Commission, so you can play their games with confidence that you are getting a legal and honest experience.

In business since 1994, Microgaming pump out new slots all the time. They also produce casino and table games, and whole casino sites, which are usually operated by branded, independent companies.

Microgaming has twice held the record for the largest payout from an online video slot.

If 2004 is a long time ago, the 96.1% theoretical return to player Thunderstruck offers its players is perfectly acceptable by the standards of 2019. Most games currently offer somewhere over 96% as their RTP, so this is at the lower end of that scale, but only marginally. The game’s “medium” variance rating also means you should expect a very typical, average experience in terms of pay-outs from Thunderstruck by Microgaming.

The top prize advertised is 10,000 coins. Betting runs from 0.01 coin to 1 coin. These figures should translate directly into pounds, but always check prize figures, betting levels, and limits on the machine you’re playing.

The standard five by three layout is in force, with just nine pay lines, which is quite low. You can play this game across desktop, mobile, and tablet devices, but you will need Flash, which you may need to enable or update in your browser. 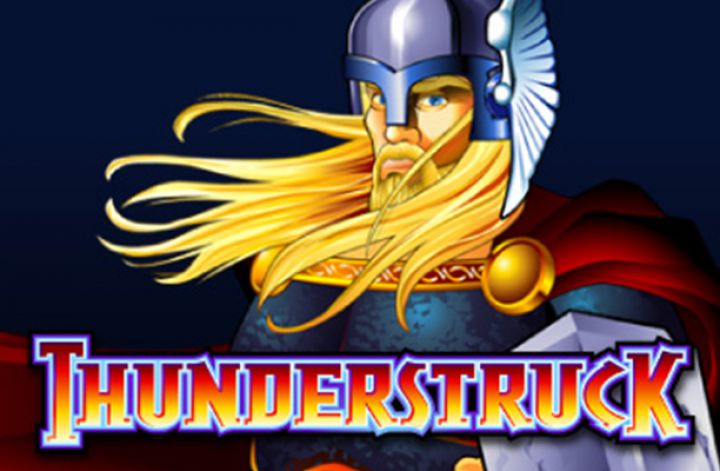 The game is simple to play, but the controls do look a little dated.

The player’s balance is shown at the left of the screen, you can then select expert mode and click for help to the right. A row of indicator windows show pay lines, coins bet, bet total, and win amounts. Underneath that a plus and minus button allows you to set figures after you have clicked to “select lines”, “select coins” or maximise the bet. At the bottom right of the screen is a blue spin button.

Click on the “view pay-out” button for a paytable, which shows:

Goats are Scatters, and they pay out from 2-times stake to 500-times stake.

In the base game, there is a gamble feature that you can double or quadruple wins with. The Thor wild also doubles wins completed with this symbol as a wild.

The scatters award 15 free spins. All wins in the free spins round have a 3-times multiplier. Free spins can be triggered again during the round.

There is no denying the fact that Thunderstruck casino slot has some old-fashioned aspects to it. The control layout feels a little clunky, as is the presentation of the paytable (hidden behind a button that most machines have now discarded).

The game symbols and visual style are probably old enough that they’ll be back in style as ironic, retro fashion items soon!

None of these bothers us particularly, because this is another quality Microgaming title that has earned its 15 years of life.

The game plays nicely, with some interest in the wilds and the gamble feature on your wins, an old fashioned feature that we’d love to see come back into fashion because it’s wonderful fun, and potentially very lucrative!

The free spins round is great, and with those tripled wins, we make the actual possible top pay-out 30,000 coins, if all those wilds click into place.

The mechanics of some parts of the game might look a little creaky, but there’s nothing outdated about the rewards this game could offer or the actual game playing experience. We like the atmosphere of magical realism!

If you like Scandinavian myths and legends then we recommend you give Thunderstruck casino slot a spin and if it’s to your taste then you’ll be delighted to know that there’s a sequel on the market in 2019. That if nothing else shows that this game has far from aged, but perhaps has matured!

Check it out today at your favourite online casino site.