Untamed Wilds slot takes us off into the magical, Swedish world of the much-loved developers Yggdrasil.

These Swedish whizz-kids have cut quite a path through the undergrowth of the gaming world and now run their own sites.

Untamed Wilds is a nature-themed slot, that like most machines from this developer, looks absolutely fantastic. It’s kind of timely too: wilding is an exciting possible response to climate change and biosphere collapse, one we’d urge to explore. We’ll be honest though, and admit we think it’s unlikely that Yggdrasil intended to radicalise a load of online slots players into Extinction Rebellion activists.

The big feature is the usual free spins round, and Yggdrasil’s usual commitment to livening up gameplay is fully in evidence with an excellent set of wilds that are characterised as game modes. It has a good set of stats, including a 96.1% RTP and a very generous top prize of 250,000 coins.

There’s a lot to explore here, but should you pack your mosquito spray and head out into these Untamed Wilds?

When was the Untamed Wilds slot released?

Untamed Wilds slot machine was released back in June 2019.

What is the Untamed Wilds RTP?

While playing the Untamed Wilds slot you can expect a decent return to player rate (RTP) of 96.1%.

This slot machine comes with 5 reels, 3 rows, and 20 fixed pay lines with plenty of action on the reels thanks to the special wild features in both base and Free Spins rounds.

Untamed Wilds slot is based on animal-theme. The slot looks amazing with sharp graphics and creative design.

Yes, Untamed Wilds slot is optimized for mobile devices so you can freely enjoy this Yggdrasil slot across all kinds of smartphones such as Androids or iPhones.

What is the Untamed Wilds variance?

Untamed Wilds is a medium variance slot machine with a decent winning potential that comes to play in the Bonus round and from the special wild features.

Untamed Wilds slot is perfect for low-rollers as the minimum bet is just 8p per spin. High-rollers can also enjoy this slot as the max bet goes up to £100 per spin. The top prize is x2,500 the total stake on a single spin.

Untamed Wilds slot comes with three special wild modes changing on every 10 spins as well as a rich Free Spins Bonus. The three modes are Bear, Moose, and Wolf mode each coming with unique wild symbols. Free Spins round can award up to 30 free spins (60 with re-triggers) and is played in the mode that was active when the Bonus was triggered.

Is there anything else that I should know about the Untamed Wilds slot?

The most lucrative wild mode is Moose Mode as it comes with Moose wilds and random multipliers from x2 to x10 depending on the number of wilds appearing on the reels.

If you like slots with an animal theme, then you can try put Wild North slot by Play n’ Go featuring as many as 7 special features and up to x2,500 prize. Wolf Gold slot by Pragmatic Play is a popular animal-themed slot with giant symbols, re-spins, and x1,000 top prize.

Yggdrasil is one of the world’s most exciting online slot developers.

In the UK market, the maker currently has just over 70 games on the market.

The games from Yggdrasil have proved popular. As they have with pop music, the Swedes have mastered a form that was introduced to them and sold it back to the people who invented it. They do it, by mastering the form almost completely.

The Facts and Figures about Untamed Wilds Slot

This Untamed Wilds slot game was released at the start of June 2019.

Its theoretical return to player is spot on for the industry average at 96.1%. This is a measure of how generous a game is, but you shouldn’t expect your own personal experience to reflect this 3.9% “house edge” as RTP is a life-time measure for a game. Medium variance suggests that prize frequency will be about the same as most other games you encounter.

The layout is five reels by three rows, with 15 symbols in play, and there are 20 pay-lines.

You can play this game on desktop, tablets and mobiles using JavaScript and HTML5. 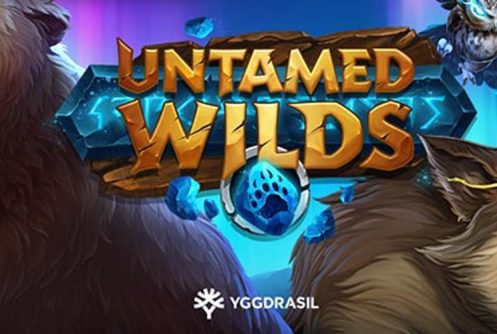 This is a simple game to play. The spin button is big green and obvious, with a max bet button by its side.

The pay-line window is at the far left of the control panel. The coin value is next, with plus and minus buttons to control it. To the right of that is the total bet amount. The Win window is next, with your balance on the far right.

The paytable is footed by spades and hearts.

Then there is a squirrel, above that is an owl, the wild boar, and finally a lynx.

The title of this game gives the game away when it comes to the main bonus feature, which is wilds.

The game plays in three modes: Wolf, Moose, or Bear. These switch randomly every 10 spins. These modes each have their own eponymous wilds.

The Wolf Mode has a wolf wild (no surprises there!). When it appears on the reels it also copies itself in another slot to give you the biggest possible win.

The Moose mode has a win multiplier, awarded at random, and running from 2x to 10x.

Bear mode builds a cross of wilds around a central wild.

There is also a free spin round that is triggered by the Northern Lights scatter symbol. This beauty triggers the round when you see more than three.

After a nice intro screen, you’re awarded seven spins for three scatters, 15 for four, and 30 for five.

The wild mode persists into the free spins round, which retriggers to a maximum of 60 spins.

There isn’t a big progressive jackpot in this game, but true to the Yggdrasil model there is a big possible top win from this game, which can amount to 2,500-times your stake, which with the top betting is £250,000.

That’s the figure players look at first, but it’s sitting at the top of a very nice set of stats and it’s an incredibly high figure for a medium volatility game.

With Yggdrasil’s trademark virtues, this is a game that is bound to have a wide appeal.

It’s easy on the eye, with a wonderful set of symbols and good theming in its design throughout. The theme is timely – and apparently a genuine passion for this Swedish company – and well delivered.

The gameplay is great, and the machine is easy to control. All games from this company work well and deliver a deep and smooth playing experience.

Then we get to the bonuses. OK, so it’s wilds and free spins, but they’ve gone to the effort of adding some variety and interest to their wilds and to delivering a free spins round that is also entertaining and engaging.

We almost always end up giving a wild round of applause to Yggdrasil games and it’s impossible not to here. This is a complex, nuanced and rewarding game and you’d be out of your wild mind not to give it a spin today.