Powered by Nolimit City, the Warrior Graveyard slot is packed from floor to ceiling with potential bonuses, including the developer’s classic nudge mechanic. xNudge Tombstone Wilds, Warrior Attack, Graveyard Spins, Death Spins and a feature-buy facility are crammed into the 5-reel, 3 rows, 25 win line engine, making it an edge of your seat thriller for any level of bet!

Legend has it, a graveyard full of warriors guards an epic fortune but getting your hands on the riches is not as easy as you think! Beneath the grassy surface lies a tribe of undead soldiers who suddenly spring into action when a threat is imminent. No need to follow a map, just follow the skeletons without becoming one yourself, and you could just spin your way to a mega multiplier of 9,797x your stake!

Playable from 25p a spin, Warrior Graveyard is suited to both the low stakes player and high rollers with cash to splash.

Bet levels are housed on pre-set buttons, allowing you to pick from any of the 25 values with ease. Six fallen warriors grace the reels in the armour they were buried in and each of those can appear stacked.

Low and medium value symbols are usually represented by card values, but Nolimit City wanted to create something different. As a result, card values were scrapped in favour of items one would typically associate with brave warriors, which include an axe, sledgehammer, sword, helmet and shield. 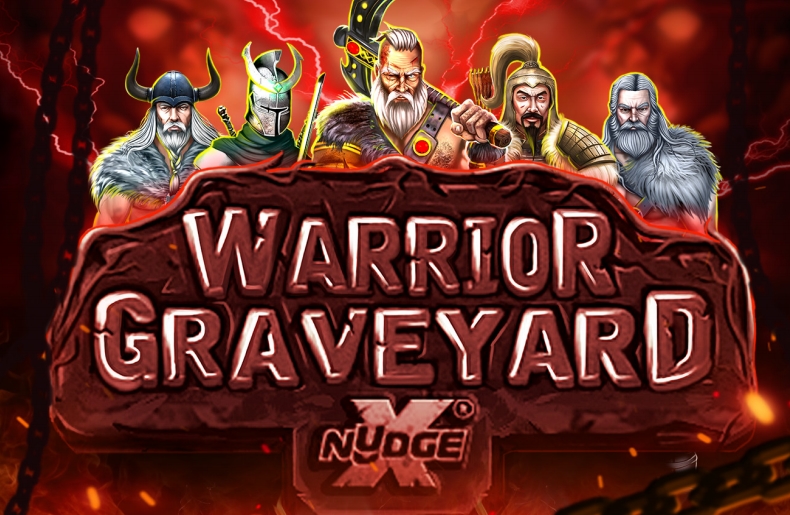 xNudge Tombstone Wilds are represented by all skeletons bar one, the wild scatter skeleton, and you’ll hardly miss them! When these special symbols fall on reels 2, 3, 4 and/or 5, they will always nudge up or down to become fully visible. Once nudged, several multipliers could be added to each other and this could lead to massive wins!

Warrior Attack is activated when three (or more) of the same warrior symbols land on the reels. What happens next is each symbol nudging into view and increase the multiplier for each in the process. But the price paying action isn’t over yet! All these symbols will shift to the left and pay out according to the paytable!

Graveyard Spins is triggered by the presence of three or more scatter skulls. The number of games you receive will depend on the number of scatters; three awards 8 spins, four awards 10 spins while five awards the maximum number of spins – 12. Tombstone wilds during the free games bonus will award an unlimited multiplier which will stick for the duration of the feature. Every step the tombstone nudges, an 1x is added to the multiplier.

Six scatter symbols are the key to the Death Spins bonus and here, 14 spins are triggered. Tombstone wilds during this feature will stick to the reels and award a multiplier based on each nudge. Again, each wild nudge will increase the multiplier by 1x.

Feature-rich is an understatement but with big prizes comes big periods between decent wins which is why Nolimit City have installed a buy-in feature for this slot game. If the thrill of the chase is something you’d rather not experience, for a one-off fee, you can jump right into the action, but you must remember, you’re not guaranteed to win, nor are you guaranteed to win back the entry fee!

The Warrior Graveyard slot was developed by Nolimit City, the developer behind Bonus Bunnies and Book of Shadows.

What is the release date?

What is the RTP of the Warrior Graveyard slot game?

The layout of the Warrior Graveyard slot is 5 reels, 3-rows and 25 win lines.

Horror is the theme of the Warrior Graveyard slot.

Warrior Graveyard has been developed for both desktop and mobile players.

What is the variance of the Warrior Graveyard slot?

The Warrior Graveyard slot is a high variance game. To give you an example of how volatility works, high volatility games pay out less often on average but the chance to hit big wins in a short time span is higher.

Minimum bet on the Warrior Graveyard slot is 25p and the max win is a multiplier of 9,797x.

Free spins are available only in this game they are known as Death Spins!

Jackpot is a set multiplier of up to 9,797x, which can be won on any level of bet.

Is there anything else that I should know about the Warrior Graveyard slot?

Nolimit City have an in-built feature where you can replay your own round or the best game rounds of others to beat their scores. Click the star icon to access this feature.

Try A Nightmare on Elm Street by 888, a slasher horror-themed video slot based on the 2010 remake of the smash-hit movie. Join the cast as they aim to bring down Freddy Krueger while benefiting from free spins, multipliers and maybe even a progressive jackpot!