When it comes to the animal world, the slot industry is in love with one above all, the proud and majestic wolf! There’s a load of reasons why, and wolves have been culturally important since medieval psychopaths were identifying themselves with them.

Naturally, the human view of wolves as both loners and ruthless killers is generally wrong, but they play certainly look good on a slot screen! This is a wild west/wolf-themed game.

Wolf Legend Megawaysslot is from Blueprint Gaming, the British branch of Gauselmann, a German giant with a major presence in real-life casinos around Europe, and hundreds of online games, of which the current most popular in the UK is Prospector, a wild west mining game.

Blueprint has been quite innovative in layouts, and Wolf Legend Megaways slot does very well in that respect. It also comes with the Blueprint style in graphics very much in evidence.

The headline figure is a 96.21% theoretical return to player. That’s an OK return in the current market, around average.

Both of these measures are long-term metrics, and will not always reflect your own experience on a game.

This is a high variance game and it has a big top win of 250,000 coins. You can win that prize with betting from 0.1 to 10 coins, in dollars, Euros, and pounds, so 10p to £10. Always check betting levels, coin values and prize limits on the actual game you are playing.

The layout uses asymmetrical reels and has 7 by 7 and 6 by 8 set-ups to deliver a big playing surface on which there are potentially 117,649 pay-lines in the company’s Megaways systems.

You can play Wolf Legend Megaways slot on desktops, tablets, and mobiles that support JavaScript and HTML5. The game was released in April 2019.

There’s a particular style to games from Blueprint and you’ll either like it or not. It’s graphical, like pretty much all games, but not particularly in a style that we like. Take a look and see for yourself. The overall set-up of the games and the innovative reel set-up are good, and the bonus games are nicely illustrated with their own look and feel. The animation is also high-quality and adds to the game.

The sound is OK, if rather over-dramatic. If you’re anything like us, you’ll be listening to something else while you play an online video slot in any case, so the mute button can be your friend if you don’t like this tune. 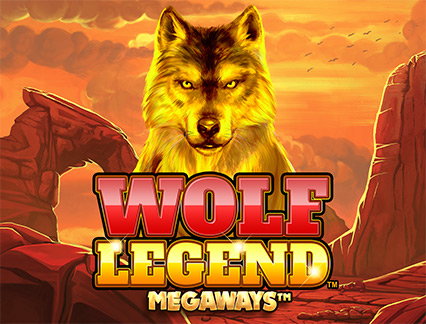 This is a classic modern slot, set up in a familiar way.

Big squared-off reels sit in the centre and dominate the screen. At the top left, a small window tells you how many Megaways are in play. The information button to open the pay-table is on the right. At the bottom left, the bet control allows you to control your total stake, and the spin button is in the centre-right with the Autospin function underneath.

Information on your balance, the current bet, messages, and wins are in the bottom strip. In the top of the game frame, you should see a help function and the sound control.

Click on the I for info and you’ll see this.

The paytable opens with a run of cards, paying out for sets of between three and six in this fashion:

The base game comes with a cascade that amounts to a respin feature. That Mystery Symbol works sort of like a Wild in effect, turning into a set of symbols to give you winning combinations.

The bonus symbol activates the free spins. See three and you’re in the game. This opens with a separate game on a lucky wheel spin awarding up to five free spins for each of your scatters.

Then another bonus game opens and you can win more free spins by scoring scatters.

Then, you can gamble your free spins.

The free spins come with a multiplier that goes up by one for every win. Free spins can retrigger, and can even be bought for 75-times your stake.

There’s a lot to like here. Gameplay on this nicely presented slot comes with a lot of depth that is bound to make players invested in coming back and engaged when they do play. That’s if the bonuses hit though, and with high variance games, that’s slightly less likely to happen.

The look and feel of the game are modern without being overly stylish (in our view, and that’s a personal one), and it operates really well.

Blueprint games are an internationally respected and trusted game designer and their titles are justly popular. If you like western themed games then this one has a good spirit and the potential to reward players with some very big wins.

Check out Wolf Legend Megaways slot now at your favourite online casino website and you’ll soon be howling at the moon – or counting your winnings.