While for many slot players the thought of staking as much as £100 on a single spin would cause a minor heart attack, you’re probably one of those who don’t even bat an eyelid while gambling hundreds of pounds in one go. You might be, in fact, dismissive of any games with smaller than 4-figure bets, and we all know high stakes slots like that are not that easy to find. I know, I tried.

Interestingly enough, almost all of the biggest names in the industry limit their games to about the £100 to £200 mark. While this is certainly not low, we’re actually looking for a bit more than that, right? From what I’ve seen Playtech seems to cater to high betting high-rollers the best, which is why the ‘top 5’ list below consists exclusively of games produced by this experienced and creative software developer. Check them out! 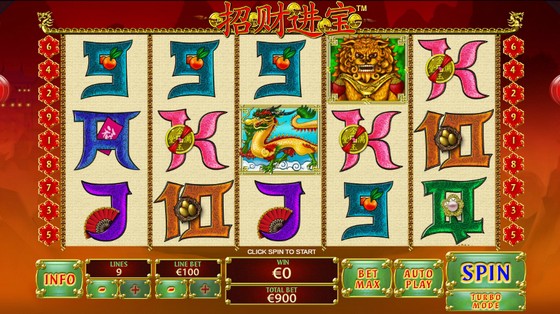 The name of this Chinese-themed high stakes slot (so they tell me) translates as “We wish you wealth and prosperity” – how appropriate is that?! Playing over 5 reels and 9 paylines, and paying both ways, the game offers a generous max win of 500,000 credits. There aren’t that many special features to help you land such big amounts. In fact, you’ve only got a wild icon which doubles the wins it participates in, and a scatter which pays up to 100x your total stake when aligned and consecutive. However, base game symbols can be very generous and deliver as much as 5,000x bet per line. The maximum you can stake on this Playtech game is £900 per spin, and you’re free to try it out at William Hill. 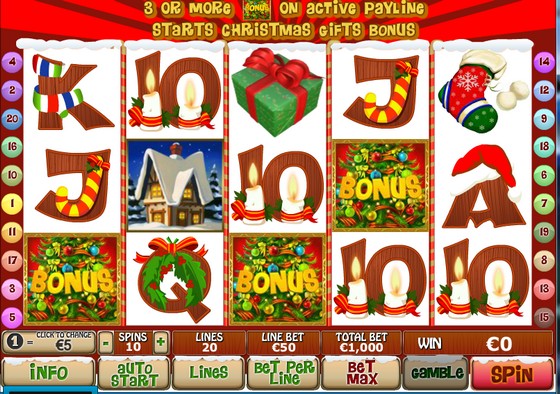 This 5-reel and 20-payline Christmas-themed high stakes slot comes with a VERY generous wild Santa cashing out as much as 10,000x your line bet, a scatter which pays up to 500x your total stake and triggers free games with multipliers, and a Christmas Gifts Bonus which launches a pick-and-click side game awarding cash prizes. Santa Surprise will allow you to bet as much as £1,000 per round while playing at William Hill. 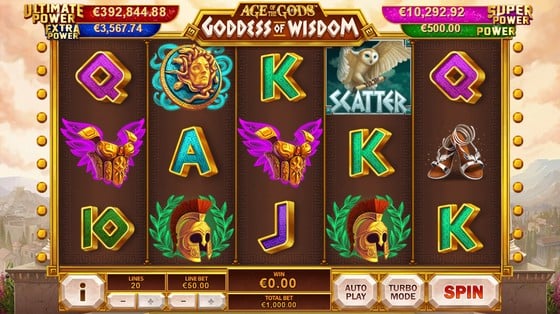 Age of Gods: Goddess of Wisdom

Inspired by the Ancient Greek mythology, this is another Playtech production featuring a £1,000 max bet. Scatters activate Battle game, and while the city of Athens is under attack, you’ll get to pick from 3 free games modes: either spin for free 10 times with the help of extra shield symbols (the highest paying one in the game), get 7 free games with a x4 multiplier, or 14 free games with x2 multipliers. While you’re spinning for free, wild icons will expand to cover the entire reel. Four mystery progressive jackpots can be won randomly when playing at William Hill. 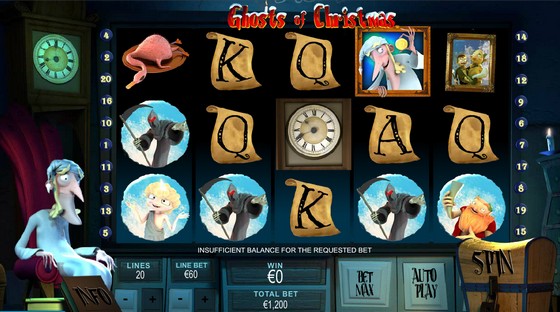 Let’s take it up a notch and allow you to bet up to £1,200 in this 5-reel and 20-payline Playtech gem. It’s based on the famous Charles Dickens novel called “A Christmas Carol” and comes with beautiful visuals, lovely animations and great sound effects. Once again we’ve got a very lucrative wild icon capable of delivering a win of 10,000x line bet, a scatter which launches free games with all wins tripled, and a Ghost of Christmas bonus which randomly triggers one of 3 bonuses. While side games are set in different environments, each of the three engages you in a pick and click game and offers instant cash rewards. Don’t be a Scrooge, give this lovely slot a go at William Hill. 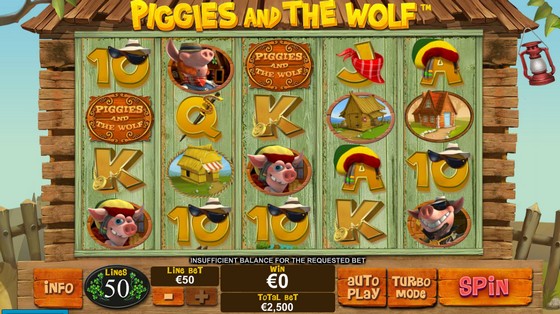 Piggies and the Wolf

I’m sure you’re well familiar with the story of The Three Little Pigs and the big bad wolf who puffed and huffed and knocked their houses down. Well, two of them at least. As all kids’ stories tend to finish with a happy end (or at least they used to when I was part of the targeted audience), the underdogs in this one eventually manage to outsmart the wolf. You’ll be able to give it a try yourself while betting as much as £2,500 per single spin.

A worthy winner of our top 5 high stake slots countdown, this is an outstanding production playing over 50 fixed paylines and offering several cool features, such as the wild icon which, stacked on 3 reels during the main game, activates Huff n’ Puff Shuffle feature to rearrange the icons and produce the maximum possible win. Scatters award free games with “pigs running wild”, meaning the wolf will chase the pig to the left until they both run out of reels and in the process turn each crossed icon into a wild. During the Blow the House Down bonus round the big bad wolf has to blow the houses down in a certain order and needs your help doing it. You’ll be happy to side with the bad guy as he offers to multiply your stake 2,500 times. You can join the battle between the piggies and the wolf at BGO or Videoslots. 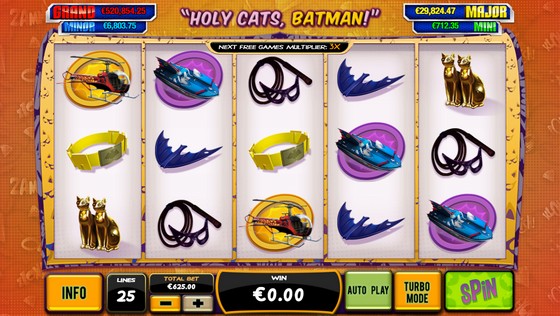 
Ok, I did say ‘top 5 high stakes slots’, but can’t help adding another one, it’s just so special. Batman and Catwoman Cash (sorry, again by Playtech) comes with a more modest but still hefty max bet limit of £625. The series of ‘Batman &…. ‘ video slots was inspired by the 1960’s tongue-in-cheek crime series, featuring symbols drawn in comic book style and using actual video footage to portray Batman, Catwoman and Robin. The game not only looks and sounds fantastic, but it also provides a number of creatively-executed features. As all other slots from the same series, this one also comes with a DC Superheroes Jackpot Game which guarantees you’ll win one of the four progressive jackpots. Personally, I think this is a great game and would urge you to try it out yourself at either William Hill.

Big Bet Slots – the best of the rest

You might be overdosed on Playtech high stakes slots at this stage, so I’ll suggest a few other slots you might enjoy. The following don’t offer as high stakes but are still considered high-roller games: Monopoly Big Event from Barcrest (£500), IGT’s Da Vinci Diamonds (£500), Pistoleras from Microgaming (£250) and NetEnt’s Jack Hammer (£250). All available at Mr Green casino. 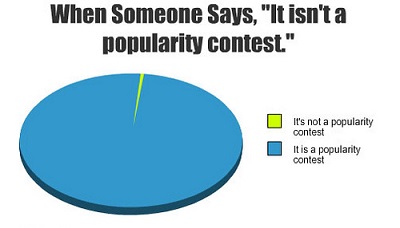 Most Popular Online Casinos in the UK 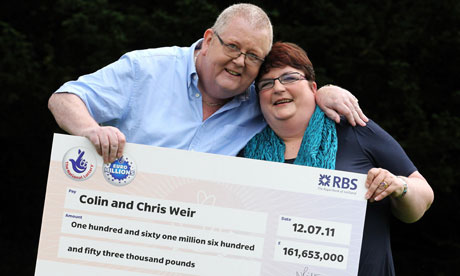 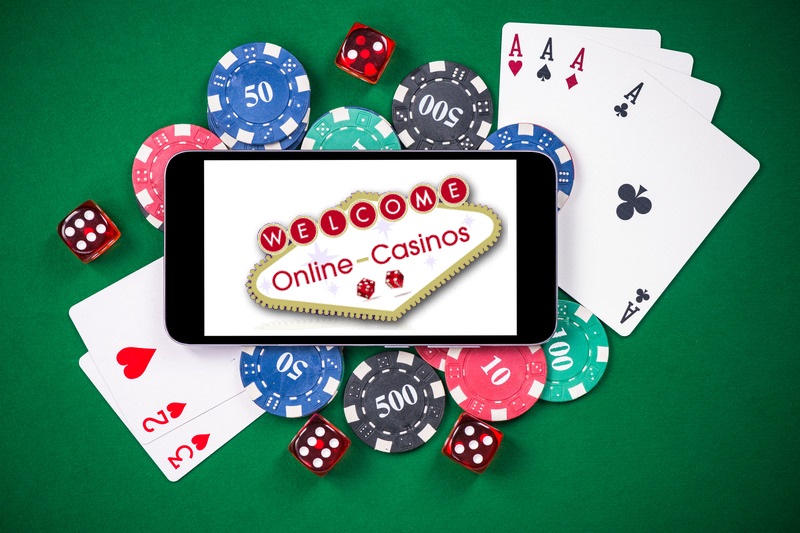