Want to go where no man has gone before? Yeah, yeah, how likely is it you or me could actually get a chance to do it? Not very. Still, like many of you out there, I love a good sci-fi experience whatever form it comes in. Opening the door into a completely different world, getting excited by unusual creatures, unimaginable locations, fantastic devices and powers – how could you possibly not love having your imagination stretched to its limits and beyond?? Obviously, game developers recognised our thirst for an out-of-this world kind of experience and have responded adequately. Results are less than impressive in some cases, but fortunately highly enjoyable in others. So let’s have a look at the top 10 best Sci-Fi slots out there today. Countdown starting… NOW! 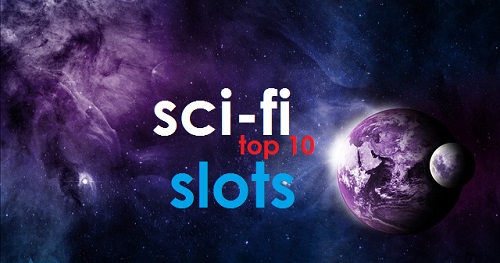 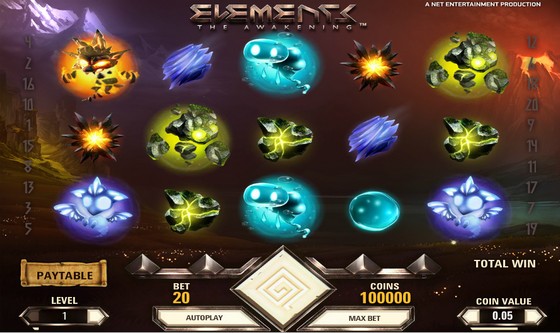 Elements: The Awakening by NetEnt has gained its spot on this list mainly thanks to stunningly beautiful graphics and lovely animations throughout. The creative Avalanche feature and the Energy Meter will initiate the Free Fall Mode; if you get 4 in a row time you’ll get to spin for free 10 times with various Wild types added. It also doesn’t hurt that playing this game could win you as much as 300,000 coins. Elements slot is available at Leo Vegas, Rizk Casino and Casumo 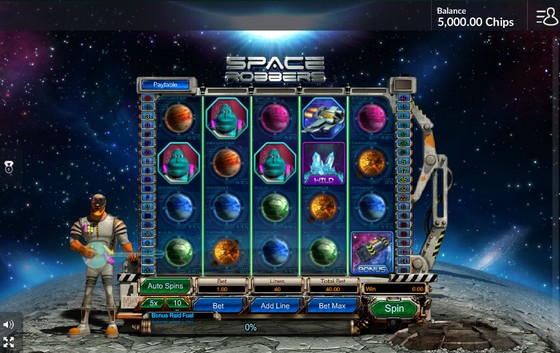 Developed by GameOS, Space Robbers is a video slot you’ll not often find in an online casino library. Graphics are not hugely inventive, though the astronaut standing next to the reels made me laugh each time he took out his banjo to show me I’m being too slow. Feature execution is what actually makes the game interesting. Various winning spins will fill your Bonus Raid Fuel which, when full, launches one of three bonus games. You’ll either participate in a solar race with wins guaranteed, select a part of an asteroid belt or pick an enemy spaceship to rob. Space Robbers is available at Videoslots. 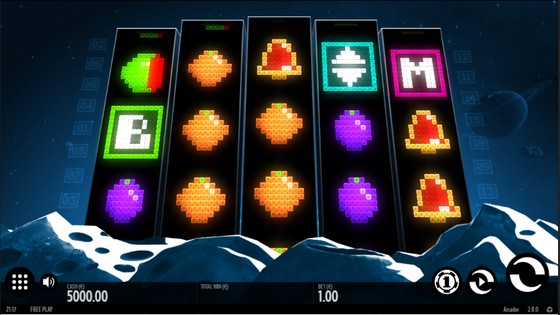 Using visuals highly reminiscent of an arcade game, Arcader by Thunderkick delivers a Space Invaders experience packaged as a 5-reel and 15-payline video slot. A mysterious monolith represents the reels area set on a planet within our solar system (or not?) and an electronic soundtrack adds to the feeling of being back in the 80’s. While it kind of looks like a classic slot, Arcader contains a lot of extras, namely Sticky Wilds, Free Spins, Multipliers and a Pick Me Mystery Game which allows you to win over 100 times your stake. The game is available at Vera & John Casino and Spin Station. 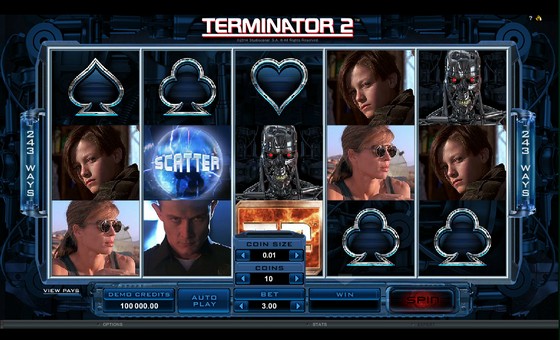 How could I possibly not include a slot based on one of the sci-fi classics, the Terminator 2? But it’s not the only reason this game is on the list. This action-packed adventure by Microgaming is rich with interesting features, such as the T-800 Vision which is triggered randomly and gets all high value symbols to pay mystery prizes. While spinning for free, an extra row is added to provide 1,024 ways to win, the highest payout being 440,000 coins. If you like how this sounds, give it a try at Dunder Casino,SpinIt Casino or EU Casino. 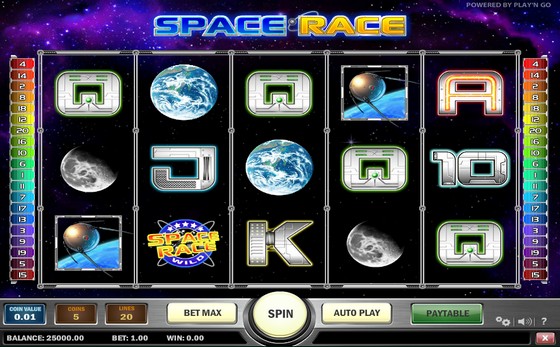 While Space Race visually doesn’t offer a lot to get excited about, this 5 reel, 20 payline slot by Play’n GO does deliver a rather unique bonus round. The goal is to land on the moon while staying clear of the meteors. Moving through several levels, each time you’ll have a task to select grid coordinates where you’ll park your space ship before the meteor shower starts. If you survive, you’ll move one level up and closer to accomplishing your mission. Play it at Casino Luck. 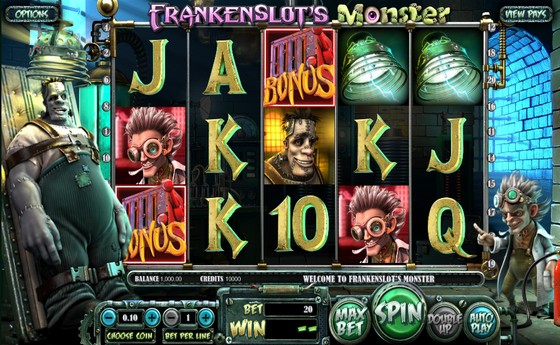 Being a BetSoft production, even before you launch Frankenslot’s Monster you know it will feature fantastic graphics and animations. And so it does! You’ll be spinning the reels in a Victorian style laboratory, with the monster strapped to one side and the mad scientist cheering from the other. The amusing bonus round lets you take charge of the panel to control the shock you’ll send to the monster, earning you up to 25x your total bet. You can play with the scientist and his monster at Mr Green and Casino Room. 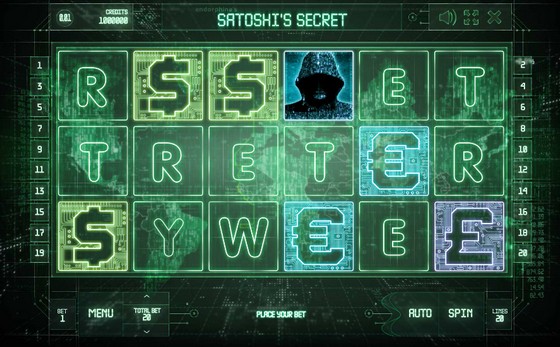 It took me a few minutes to decide whether Satoshi’s Secret from Endorphina belongs to this genre or not, as it’s actually inspired by hackers and bitcoin. Finally, it made it to the list due to a strong “matrix” and virtual reality feel. Whether you’ll agree with me or not, I’m confident you’ll enjoy its uniqueness as well as 2 highly creative bonus games. The Trading Bonus gets you involved in a kind of trading currency game on a separate slot machine, while the QWERTY Bonus sends you on a heart-racing mission to unlock as many bank accounts as you can before the alarm goes off. Experience the thrill at Videoslots. 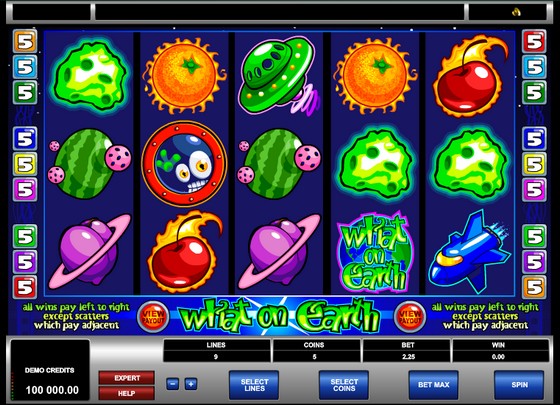 What On Earth is a 5 reel and 9 payline video slot by Microgaming which comes with bright, simple visuals, is super-fun and highly interactive. It features 3 different Scatter icons which activate a “Beam’em Up Bonus” round. You’ll basically be helping aliens abduct as many as possible out of 13 thirteen different characters from Earth, each providing a Multiplier of up to 200x. The Destination Bonus round is equally engaging, letting you travel to New York, London, Cairo and Beijing to abduct a special earthling in their home town and win up to 400x multiplier. Join forces with aliens at 32 Red or Casino Luck. 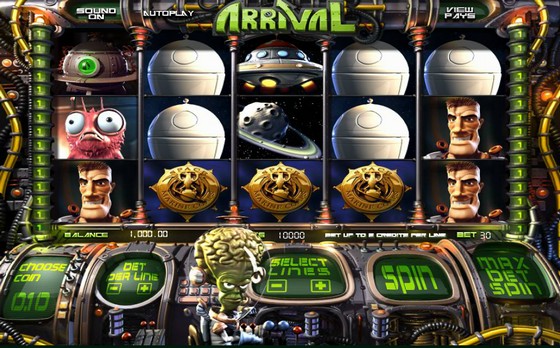 Arrival is another beautiful execution of the sci-fi theme which comes from BetSoft, only this time it involves galactic police on a mission to protect mankind from an evil alien and his powerful robot army. You’ll be flying the brainy alien’s spaceship and piss yourself laughing at the lines he sends your way. The UFO Click Me feature prompts you to pick UFOs to reveal instant prizes. You’ll get to be the hero in the bonus round, helping the marine save his lovely female colleague who has been abducted by the Brain. This entertaining space adventure can be played at Leo Vegas and Dunder Casino. 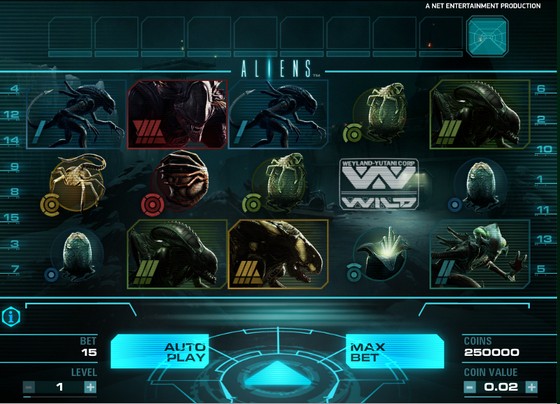 It was a tough choice, but finally my vote goes to Aliens, a licensed game by NetEnt which offers a unique combination of an arcade game and an online slot, complete with a dark and scary atmosphere very faithful to the original movie. Three are 3 levels to move through – The Search, The Encounter and The Hive. Filling the Alien Activity Meter on level 1 lets you access the next one and fight through the corridor to reach Queen Hive. If you manage to shoot all the aliens without running out of ammo, you’ll get to play on level 3; otherwise you are sent back to have another go. Fun, fun, and more fun! Check it out for yourself at Rizk Casino or Spinit Casino.