Fact: everybody who loves playing slots wants to see as many Wild symbols as possible. This joker which has the power to take the place of any of the regular symbols often performs additional tricks, the most appreciated one probably being Stacked wilds. If you, like us, believe stacked wilds can help you win more, read on to find out which are the best stacked wild slots. 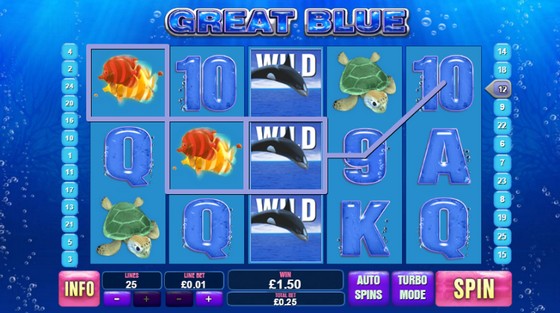 The Great Blue
10. Visually quite simple (and why the heck not, some people prefer it that way) Playtech slot plays across 5 reels and 25 paylines. Wild whale will cash out as much as 10,000 coins if you manage to catch 5 simultaneously, and it will double the prize each time it contributes to the winning combo. Scattered shell launches a bonus round with a pick-and-click affair adding free spins and increasing the multiplier to up to x15. What’s more, feature can be re-triggered and additional spins awarded infinitely. See how many you can score at William Hill, BGO or Mansion Casino. 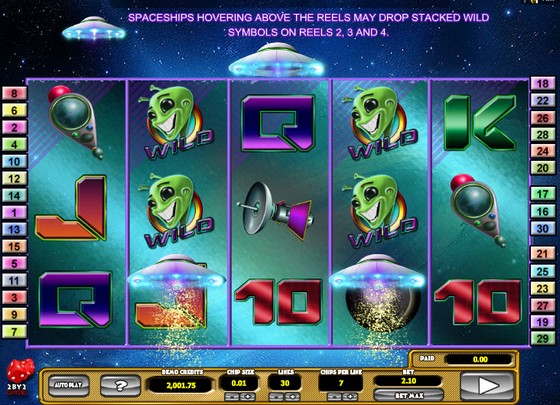 Cosmic Invaders
9. An intergalactic adventure awaits in this space-themed video slot from 2×2 Gaming. On any of your spins, spaceships hovering above the reels might drop stacked Wild symbols on reels 2, 3 and/or 4. Scattered UFOs trigger Alien Picking Bonus round in which you’ll be picking among aliens to win a cash prize or an extra pick. Cosmic free spins come with one of the reels going totally wild. If you fancy a trip into the unknown with this retro-looking game, give it a try at Videoslots, Casino Cruise or SpinIt. 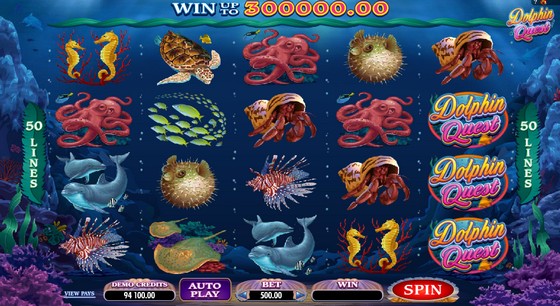 Dolphin Quest
8. Guess where this Microgaming slot featuring stacked Wilds takes you! Under the sea, dah. On top of your regular substitute, assistance is provided by Scatters which also act as Wilds, plus they trigger the Dolphin Quest Bonus. You’ll get to play a mini game featuring a 3-reel slot which can cash out between 50 and 3,000 coins. There’s a juicy 12,500-coin jackpot to be won during the main game, and even more tempting 150,000-coin one to be collected in the bonus game. Want to know where? At Betway, 32 Red or Videoslots. 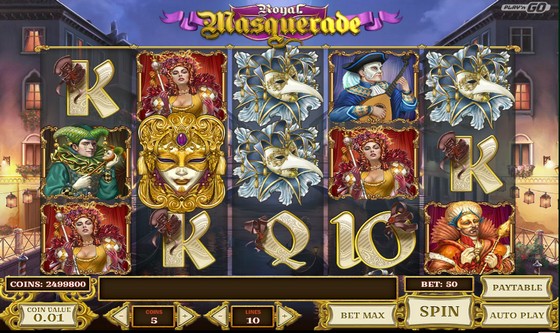 Royal Masquerade
7. If you’ve never been to Venice, you might want to think about a visit before this unique Italian city sinks into the Adriatic Sea. Meanwhile, try to collect 500,000 coins by using the virtual alternative provided by Play ‘n Go. While hook-nosed icon plays the role of a substitute and lands stacked, Scatters will dish out up to 20 free spins with a guaranteed win on each of them. Experience the unique atmosphere of Carnevale di Venezia by visiting SpinIt, Casino Luck or Casino Cruise. 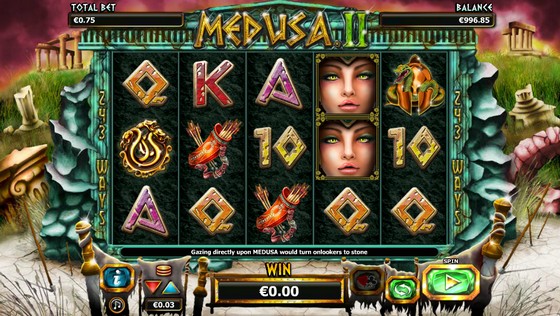 Medusa 2
6. Wasn’t Medusa supposed to be an ugly monster with hideous snakes for hair? NextGen must be unacquainted with Greek mythology because they’ve made their Medusa absolutely gorgeous, with nothing to fear from. She’ll in fact appear stacked and randomly lock the reels to display identical symbols in adjacent positions. A soldier will on occasion try to attack her, only to be turned to stone and reveal stack of Wild icons. Experience a different take on the mythical Gorgon at NetBet, Miami Dice or Spin Station. 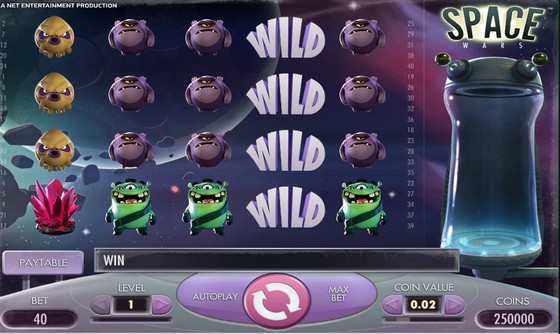 Space Wars
5. All symbols in this lovely NetEnt game come stacked to help you score a win, including the Wilds which appear on reels 2 and 4. When you manage to form a winning combo, the participating symbols will be teleported to the Cloning Pod which clones them and throws them back onto the reels while granting a free re-spin. There’s not zillions of features here, but hey, in the right conditions simple can be very appealing – as is the case with this game. You can win as much as 400,000 coins by joining space wars at Dunder, Play Ojo, or Leo Vegas. 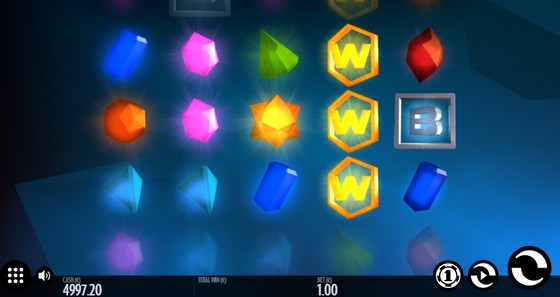 Flux
4. Futuristic Thunderkick slot delivers a slightly different experience. Brightly coloured geometrical shapes float suspended in mid-air, with the yellow W acting as a substitute and always appearing stacked. Scatters take you to the bonus round in which you’ll be given 3 options. One offers you to spin for free while winning both ways, the second awards fewer free games but plays with 3 extra rows, and the third combines the two extras with the smallest number of spins. Take your pick at Miami Dice, Leo Vegas or Mr Green. 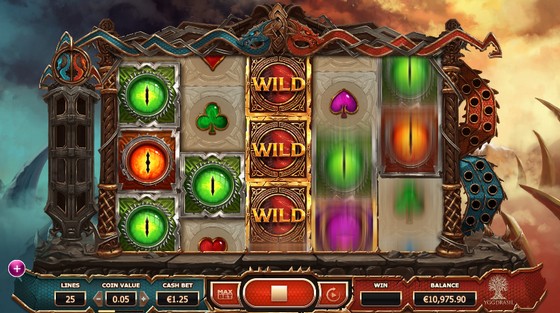 Double Dragons
3. What a great job Yggdrasil has done with their Double Dragons slot! Beautifully designed game features cascading reels and dragon heads which function as special Wild icons, either converting 2 to 3 regular symbols into Wilds, or doubling the drop-down win. Collecting the heads wins you free spins which offer a shortcut to the Double Dragons feature, normally activated by 4 consecutive wins. This feature adds 2 high-stack Wilds as many as 28 symbols long – nice! Make sure to turn the speakers on to enjoy the fantastic musical background as you play the game at Rizk, Casino Room or Videoslots. 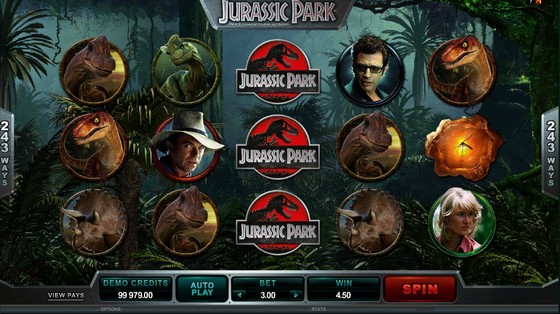 Jurassic Park
2. Based on the movie featuring extinct dynos brought back to life (bad, bad decision), this 243 ways-to-win Microgaming slot offers you to collect as much as 475,000 credits. Scatters trigger 25 free spins, after which you’ll get 12 more combined with a feature of your choice: Wild reels, multiplier Wilds and Split Wilds (and potentially a 6-of-a-kind win as the result!), Running Wilds where Wild stacks grow with each free spin, a mystery Multiplier, or Winning Wilds. A T-Rex sighting activates T-Rex Alert mode which adds 35 extra Wild icons to the reels for the next 6 paid spins. Meanwhile, Wild game logo comes stacked on all reels. You can travel millions of years back in time at Spin Station, Rizk or Casino Luck. 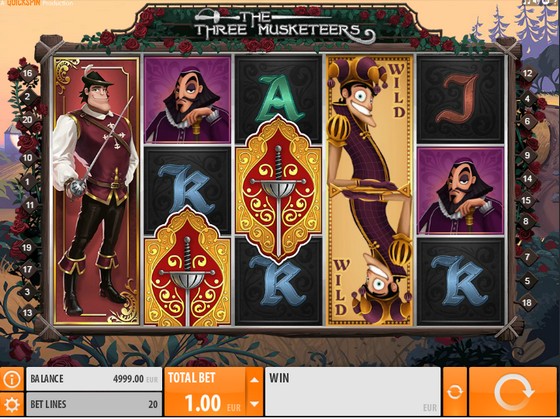 The Three Musketeers
1. Quickspin has built their slot around the heroes of a famous historical novel set in 17th century France. The brave adventurers are presented with cartoon-style visuals, each occupying an entire reel, same as the Wild jester. Bonus symbols triple the prize and activate free spins, with all musketeers substituting for each other in All for One pays. Stacked Wilds will nudge up or down to improve the spin outcome, and each full-stack Wild participating in a win multiplies the award by up to x4. Go see what Athos, Porthos and Aramis are up to at Mr Green, Leo Vegas or Videoslots. 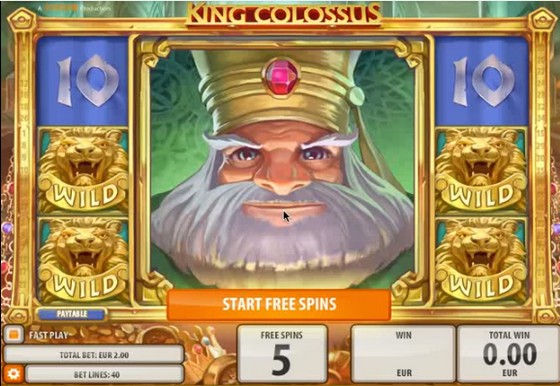 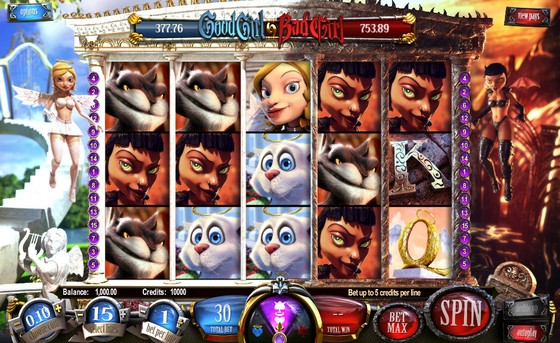 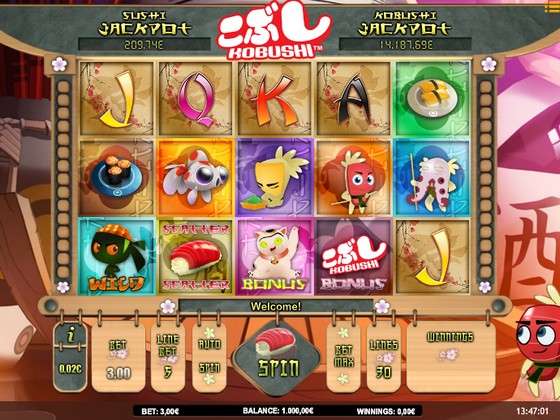 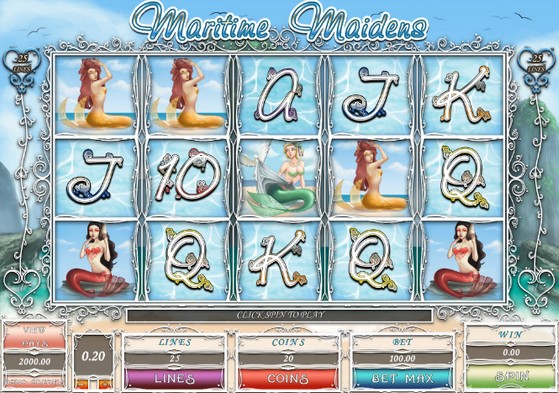 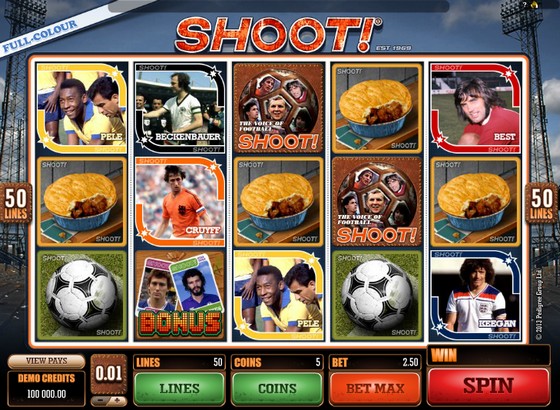