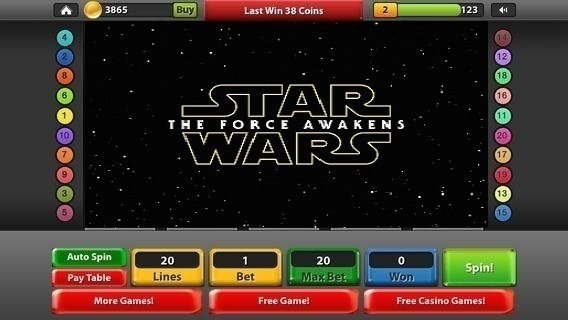 With Poe Dameron and Kylo Ren joining old faces Han Solo and Princess Leia on the reels with loveable robot BB-8 triggering multiple bonus features, the new Star Wars slot should be every Star Wars slot fan’s dream come true. We say should be because since Lucasilm, the creators of Star Wars, were acquired by family friendly firm Disney a couple of years ago the decision was made that slot games were incompatible with their values. Hence the proposed Force Awakens online slot game will have to remain a mere fantasy for now. We are as traumatised by this development as you are and we are drafting a petition to present to Disney demanding an online slot game of The Force Awakens. Until they give in to our demands, which we are very confident about, we will use this space to thrash out various ideas for features that we would like to see in the slot version of the Force Awakens.

It’s not like the previous Star Wars slots have not been popular, frequently they were the most played slot machines in land based casinos with very long queues for most machines, and it’s this popularity that made previous franchise holders Lucasfilm reluctant to allow online slots versions of Star Wars. Unfortunately now the prospect of a true Star Wars slot is even more distant despite the huge revenue that it would likely generate for the licence holders and online casinos alike. We can make a bad thing good though while we wait for the Force Awakens slot petition to gain enough signatories – please send in any and all ideas you have for a prospective slot version of the new Star Wars film, please also send artwork and even music that you think could accompany the slot version. Once we have a substantial creative package as well as at least 50,000 signatures to the petition we will get on to Disney about proceeding with an online slot game of Star Wars 7. If necessary we will arrange a march on their Florida headquarters, neither Mickey Mouse nor Donald Duck will be able to stop us, for we will have The Force on our side and we certainly have no lack of faith that this is a slot that can and will happen.

The Force is with us brothers and sisters.

Please sign this petition to get Disney to make a slot version of The Force Awakens: