Rival slots are rarely your regular games of spinning the reels to form winning combos while getting freebies through symbol-triggered features.

Quite a few offer an interesting combination of a slot game and a story, developing in stages and featuring tons of interactive bonus rounds. You’ll also find some quirky themes and unusual mechanisms, which means that even the “ordinary” Rival slots deliver a little something different.

Once again, we had a tough assignment picking out the best Rival slots. Still, we managed to compile a list of the top 8, which you can check out below.

8 Best Online Rival Slots Games (That You Have to Play) 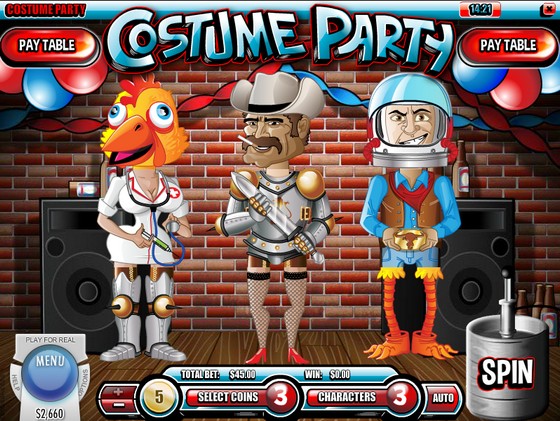 Not many reviewers mention this Rival slot game but I think it’s great simply for being so different from everything else out there.

It’s a 3-reeler in which reels spin sideways instead of up and down while winning combos are formed by matching the head, body, and legs of various characters. You can pick 1, 2, or 3 characters to play with and only the active ones will earn you coins when matched up. The Wild icon helps by replacing the central body symbol.

Everybody is welcome to join this unusual costume party at Videoslots. 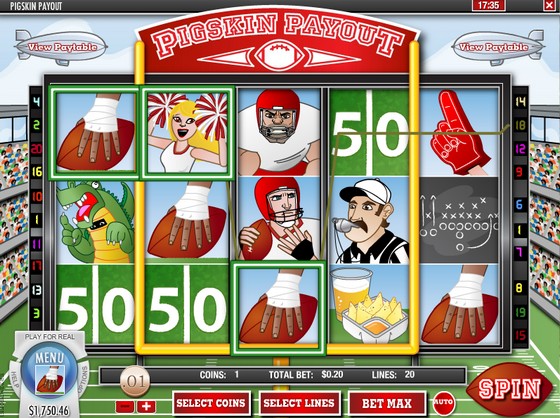 Some of you may have guessed this is a slot inspired by American Football, while others would have no clue what it was about until launching it.

Offering a realistic stadium atmosphere with the help of cheers and whistles, Pigskin Payout comes with a real treat: up to 25 Jackpot Can’t Lose Spins with the first and last reel going completely Wild and all wins multiplied x3.

A Wild Cheerleader will sub throughout the game, offering to double the prize while paying up to 7,500 coins herself.

Check if those free spins are truly a sure thing at Videoslots. 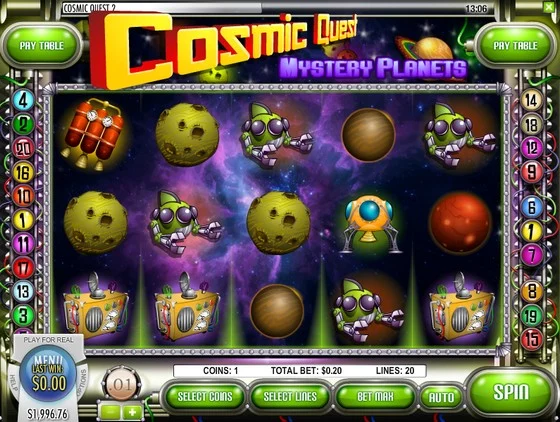 In the first part, Scattered Monkeys launch free spins with an expanding Wild, while Pink Pilot icons trigger the Asteroid Blasteroid skill-testing bonus round. You’ll have to get your rocket through an asteroid belt by shooting to destroy them while avoiding a collision that will cost you a life.

The sequel offers up to 50 free games with double prizes, expanding Wilds, and a somewhat tough-to-trigger Bonus round that gives you a skill play or a random win. The first one will ask you to navigate the rocket through lunar passages without crashing into walls (not at all easy!) – the further you manage to get, the more you’ll win.

One of the best rival slots. Embark on this exciting space adventure at Videoslots.

5. As the Reels Turn 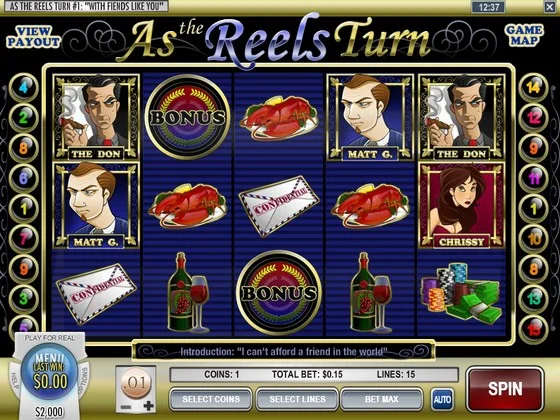 This is actually a series of 3 Rival slots offering an inside scoop of what’s happening on the floor and behind the closed doors of El Paradiso Casino.

Mixing with the Casino manager and his pet Ivan the piranha, the lovely Chrissy, and the mobsters, you’ll be progressing through the story by unlocking 7 scenes with the help of Scattered Advance-To-Next-Scene icons.

There are a few more Scatters to benefit from, namely the Bonus symbol, which triggers the Counterfeit Chips bonus round offering instant prizes, the Elvis impersonator awarding the Tommy Wong Feature Act which prompts you to choose the most popular performer’s character, and the aforementioned Ivan which triggers free spins with x3 multiplier.

A few more gifts will be made available as you move on the game map, so go find out what they are in one of the very best Rival slots at Videoslots. 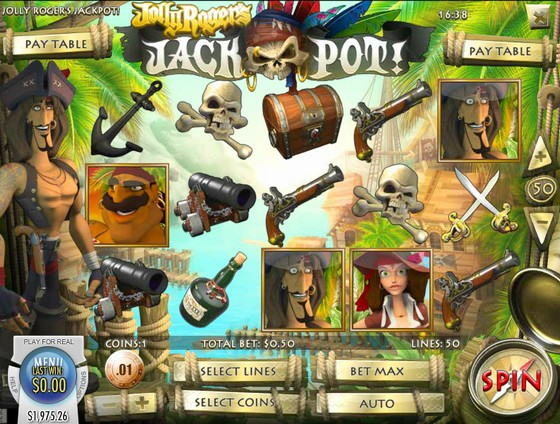 Jolly Roger’s Jackpot is a pirate-themed video slot delivering over 50 pay lines, though one can play with less.

Wonderful design and lovely animations come combined with several lucrative features. The Scattered pirate will cash out 5,000 coins for five-of-a-kind, the Expanding Wild can generously boost your balance when landing on 3 reels simultaneously, and the beautiful female member of the crew will award up to 50 free spins.

Having experienced numerous single and double occurrences of the pirate ship, getting the elusive third one will launch the bonus round that prompts you to attack enemy vessels with your cannons to sink them and collect their treasures.

Jolly Roger’s galleon can be boarded at Videoslots. 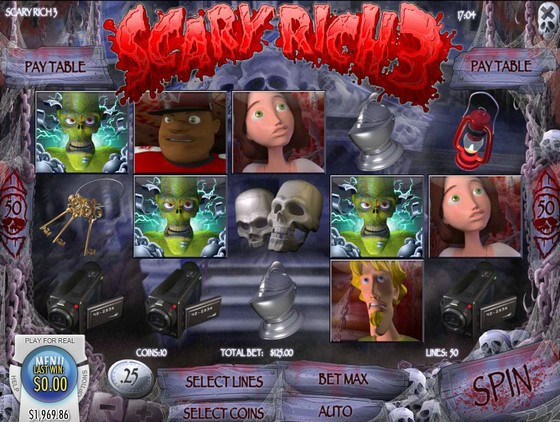 Scary Rich is one of many Rival slot series which get better and better with each sequel. It’s a spooky affair with blood being spilled each time the reels turn.

Wilds come with a multiplier of x2, x5, and x10 during the base game, and will expand over their respective reels while playing on the house. There’s up to 666 high-powered free spins to be won, courtesy of the old Baron Bluhdsteyn, which will surely give you a heart attack with its creepy visuals. That is if the sound effects haven’t done it already.

Clearly, this is not a game for the faint-hearted so, if you dare, go play this top Rival slot at Videoslots. 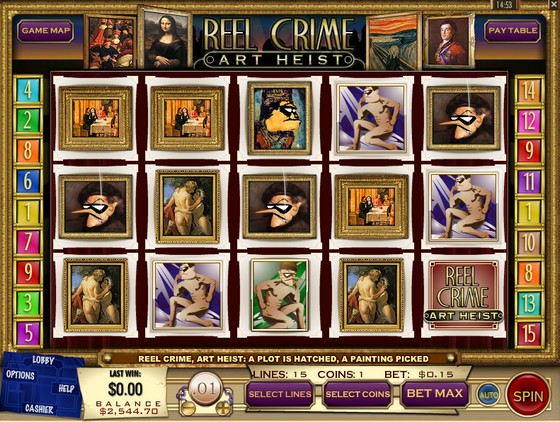 You can help them out by doing 5 things – select the masterpiece to steal, gather tools and pinch the painting, do a successful runner, find a collector who’ll take it off their hands, and avoid being caught by a gendarme while performing the transaction.

Landing 4 of any Masterpiece paintings will start the heist and open a world of exciting, highly interactive, and rewarding bonus rounds while moving through different stages of your thieving adventure.

If you find the life of a criminal appealing, make sure to try the first game in the series, which is also an action-packed multi-stage affair sending you to rob a bank.

Both of these awesome Rival slots can be played at Videoslots. 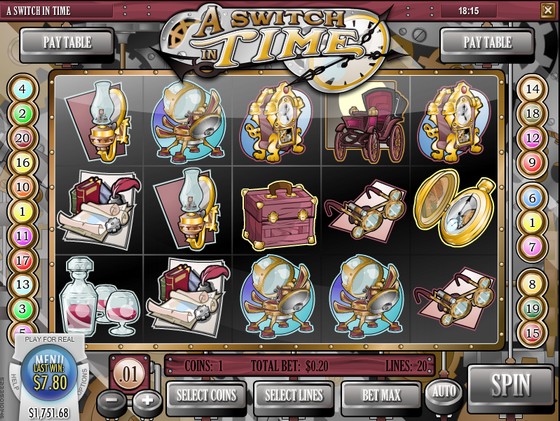 Hop on Rival’s time machine and you’ll be transported to the past or the future with a mission to stop the love of your life from marrying another bloke.

Wilds will expand during free spins, as many as 78 of them, with all rewards boosted by x9. The time machines trigger the bonus round which takes you either forward or back in time. In the past, you’ll be interacting with dinosaurs and cave people, whilst the future lands you in an out-of-this-world environment filled with aliens.

Depending on which period you’re in, the bonus round will have you press buttons to choose the time direction you want to travel in, fight a T-Rex or kill the Cyborgs, each paying instant rewards.

This game is actually a 3-in-1 affair, make sure to give it a go at Videoslots.

For more exciting gambling choices, make sure to keep an eye on our list of the best online casinos in the UK.

What Are Rival Slots?

Rival slots are produced by one of the biggest developers, Rival Gaming. They provide over 260 games for you to try out.

These slots truly stand out from the crowd due to their consistent quality and inventive gameplay. These aren’t your run-of-the-mill slots that are barely distinguishable from every other game. Each one offers a full and engaging story, a unique style, and plenty of chances for big payouts.

These games are a must-try for any slots fan out there!

If you’re a fan of Rival Gaming, why don’t you also check out our pick of the top Yggdrasil slots too while you’re at it?

Our favourite slot game is definitely A Switch in Time!

The story is truly a blast. Who hasn’t wished they could go back in time to get another chance at a missed opportunity? And the bonus features really make it worth your while, providing loads of cash-winning opportunities.

#2. Where Can I Play Rival Slots for Free?

We wouldn’t blame you if you just want to play these games for the fun of it, without the chance of winning any coins. You can head over to Video Slots or All British Casino to try them out for free.

#3. Can I Play Rival Slots on Mobile?

Yes, Rival slots are available for mobile as well as desktop gaming. You can absolutely play these thrilling games on the go!

Yes, Rival Gaming is a well established, trustworthy casino game developer. However, you have to make sure the casino you are playing at is trustworthy too. Never trust an online casino that isn’t properly licensed and regulated!