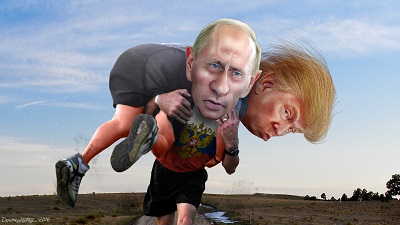 The dim-lit room threw shadows where even shadows were afraid to lurk.  Apart from the rusting shade lighting the poker table, the room swallowed the edge of menace that peeped from behind the shadows.  The dealer cracked his knuckles nervously, glancing at the man sat opposite him, pretending to drink vodka. The shot glass in front of Putin heralded a man in need of Dutch courage; however, the glass was cunningly filled with iced water, poured from an innocuous bottle purporting to be one of Russia’s finest.

Picking up his glass again, he paused; he could hear a kerfuffle outside.  It had to be American. The door swung open, slowly. Trump sidestepped into a pool of shade, surveying the scene.  Blinking slightly he walked into the centre of the room.

Drawling slowly ‘So you drag me halfway across the world, to this place?

‘It seemed safer’ Putin lolled indolently in his chair ‘Your C.I.A. and my security forces have no idea of the meeting or what we are about to discuss.’

‘Yeah, but what about the Brits?’

‘They seemingly care very little about our shenanigans.’  Putin shrugged, desperately dragging his eyes from the centrepiece, ‘The piece’.  The piece he craved;  the piece that would give him the power to control Europe and the Americas.  His palms itched in anticipation.  The Americans he thought savagely knew nothing of the world, that’s why he’d chosen Clacton on Sea.  Still, he’d been right, Trump couldn’t resist a challenge and he’d made it to this hell hole.

Thrusting himself into his chair Trump replied ‘Don’t mind if I do’ and then quickly placed his hand over the glass ‘I’ll drink from your bottle’ his eyes boring into Putin’s.

‘As you wish’ he waited until Vassily had poured the drink. Taking a sip Trump smiled ‘so what’s with all muscle?  I thought this meeting was secret?’

‘It is, this’ he pointed to Vassily is my most trusted bodyguard.  Last week he killed twenty people: he was taking it easy.  We call him the ‘Butcher.’  Savouring the word; he waved his hand nonchalantly at the dealer, staring at the piece, wondering if it would move.  It didn’t and neither did Trump’s eyes, which unnerved him slightly.  ‘Anyway, this is another of my most trusted…’

‘Bodyguards’ Trump mocked quietly, shifting in his seat he smiled to himself. Yes, he thought you’re not quite as sure of yourself as you would like.

‘Who’s the big ugly broad in the corner?’

Putin laughed.  ‘British Intelligence!’ He watched Trump momentarily flinch and laughed.  ‘No, she comes with the room.  She is British barmaid.  But I am thinking of hiring her, she’s even more frightening than Vassily here?’  He laughed as his bodyguard growled and cracked his knuckles.

Relieved Trump leant forward ‘She’s a bar in herself, what about the maid?’  They both cackled unpleasantly. Putin was the first to stop.

‘Enough of this idle chat, we are here to play poker.  You know the rules?’

‘I am no stranger to the game.’ Trump leant back in his chair trying to fathom his opponent.  ‘Although I am not sure that the President Elect should by playing strip poker, at least when we discuss business, neither of us is hiding anything.’ Trump smiled belying his unease.  Could this be the end of his political dream or, he caught the glint in Putin’s eyes, could this just be the beginning?

‘Are you afraid, Mr President Elect?’

‘Hey, I faced Hilary Clinton; it doesn’t get much scarier than that. Let no man call me a coward! Let’s play.’  As the dealer dealt the cards Trump asked ‘What are we playing for, World Peace?’

‘Something like that?’ Putin glanced at his cards.  His brows furrowing slightly as he flipped them over, pairs.  Trump smiled ‘flush’.  His nose twitched as Putin reluctantly removed his tie.  Trump’s winning streak quickly waned; his three of a kind was trumped by a straight flush.  Two pairs were outranked by a full house.  Slowly his clothes piled up on the floor.  He was sweating despite the chill of the room and his general nakedness bar a pair of red striped boxer shorts.  Putin watched his discomfort with an amused smile.  Leaning forward he touched his ever-increasing pile of chips.  ‘Let’s make it more interesting.

‘Spit it out, man.’ A vein throbbed unsteadily at Trump’s temple.

‘Why don’t we bet on something we both want?’ A smile tugged at the corners of Putin’s mouth as he leant back in his chair, surveying his prey.

Suppressing a shudder, Trump stared at his protagonist and asked ‘such as?’

‘I want to expand our borders and you want to control yours.  How about playing for that?  If I win, which  looks likely you will not raise a hand as I redefine my borders and should, by some miracle you win, I will help you build your wall.’

‘What else?’ Trump demanded suspiciously.  He could win; he just needed a little luck, a little divine inspiration.  Oh to have that wall!

‘There is one other little piece I would like?’

‘You got it,’ Trump interrupted before Putin could finish the sentence ‘you help me build that wall and I will give you all the peace you want. Deal?’

‘Agreed!’ Smiling a smug little smile as the final hand was dealt; Putin touched the edge of his cards and grinned.  This was it; he was so close he could taste victory.  Uncharacteristically he drained his drink, breathing deeply as the ice-cold water numbed his throat.  He waited, like a cat, his buttocks tightening with excitement, his pulse quickening. Turning his cards, slowly and smiled; a straight flush.  It was like torture, exquisite to both parties in two very different ways.  Anticipation glowed in his eyes.  Trump could feel his power.  Silently he turned over his cards.  Putin stared at Trump; Trump met the glance and looked down at his cards again.

The ringing phone jolted them both, Trump felt his shoulders relax as Putin bellowed and postulated, finally throwing the phone at the hapless Vassily.  It was over; the first round had been played and…

‘I have to go; my army has decided to invade Eastern Europe.  Now I have to face the press and say they read the map the wrong way round.  It happens.  Vassily’ he looked at his cards and then at Trump’s again.  I take it our deal still stands?

‘I think I shall enjoy doing business with you. Putin laughed with genuine enthusiasm and held out his hand. Trump gritted his teeth, determined not to wince as Putin crushed his fingers forcing bone against bone and returned the handshake.  For a moment both men were locked like rutting deer, but it vanished, retreating to the shadows as both men released each other’s hands. Snapping his fingers at his bodyguards Putin swept out of the room.  Trump sagged as the door slammed shut and glanced at the barmaid.

‘We won’t tell anyone about this, will we?’

‘No sir’ Wincing Samantha pulled the wire from her ear.   Moving to the bar she pulled a small briefcase and placed it on the countertop. ‘You had me worried for a moment though.’

‘You, me both’ muttered Trump as he pulled his clothes on.  Straightening his tie he watched Samantha for a moment. ‘I think it’s wise that we don’t meet for some time’ he placed an envelope on the table.  ‘But perhaps, while you’re on leave you may think about how we are going to deal with Theresa May next year.’ Striding into the winter sunshine he smirked, a Royal Flush.  Well, who could have predicted that? 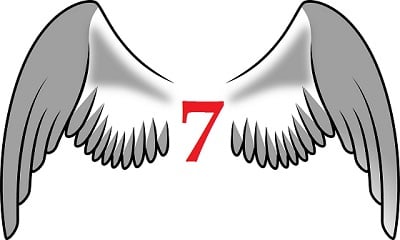 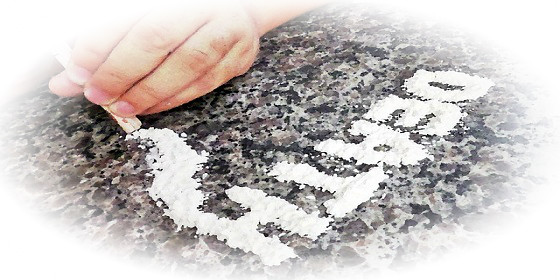 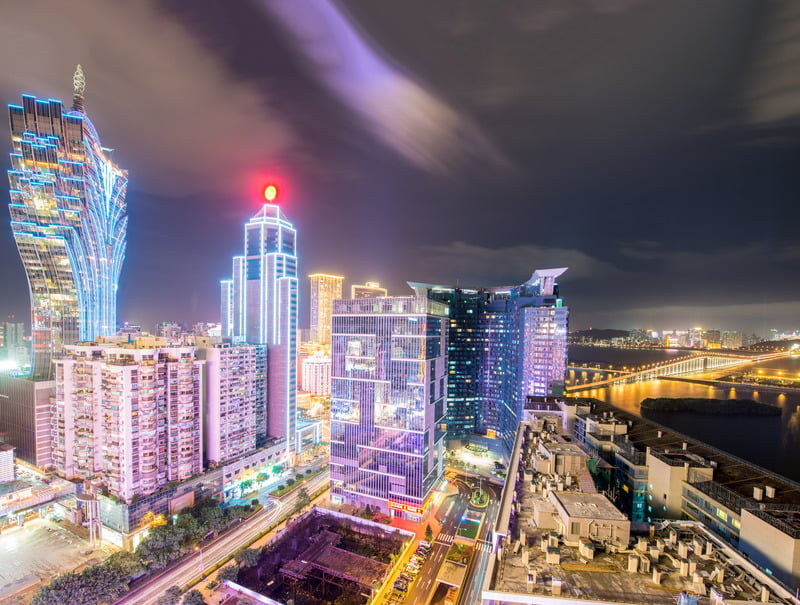