The Phantasmic Fortunes slot was released in 2020 and became the very first slot by iSoftBet to feature its innovative Xpanding Ways mechanic.

Boasting a mysterious theme, the magician in this slot is waiting to conjure up some winning spells, all thanks to individual reels with expanding capabilities.

Beginning life as a 5-reel, 3-row reel engine with 243 ways to win, Phantasmic Fortunes has a hidden potential of 7,776 ways to win per spin and with a max win of 13,867x your stake, this could lead to colossal wins for any level of bet.

Catering for both the low stakes and conservative players, Phantasmic Fortunes welcomes bets from as little as 20p. High rollers will ultimately feel the strain with bets capped at a mere £20 a spin. That being said, the multiplier of up to 13,867x will be a tempting attraction. The theme is one of black magic and spells with a green-eyed magician waiting to boost your fortunes.

Symbols on the reels are in-keeping with the theme and include hats, cards, potion, pocket watch, raven as well as the usual card patterns of spades, clubs, diamonds and hearts in 3D format. Other symbols include a diamond, a magician wild, standard wild and two bonus wilds. The most valuable symbol listed is the hat, but with a top prize of £100. The value of the symbol wins may seem a little disappointing, especially when playing max stakes, but it’s the number of win ways that will ultimately lead to bigger riches. 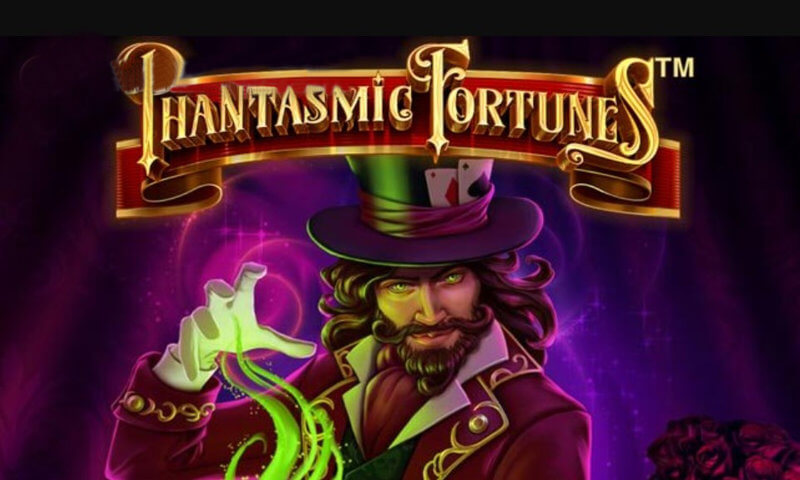 Purple orb wild will substitute for all symbols except the bonus scatter (magician) and will appear on reels 2, 3, 4 and 5.

Phantasmic wild (fiery orb) and the magic wild (green dragon eye) are available when the modifier is triggered and are magically placed in stacks on random reel positions. Housed above each reel is an orb and each orb will either carry a multiplier or one of the two special wilds. Each time a diamond appears, the reel in which it sits will expand by one, moving you closer to the prize directly above. Diamonds not only lead to bigger prizes but more ways to land some wins too, with that 243 initial ways to win expanding each time. Once you reach the prize orb (4 diamonds needed for this), the reel will reset to 3-symbols high.

Randomly on any spin, a magic boost can kick in and boost as many as 5 reels up to their maximum height. Magician bonus (scatter) only need to be in partial view to unlock the free spins bonus round, which deliver an unlimited number of free games. Free spins will continue until you reach the collect icon, which could occupy any or all of the orbs above the reels.

Each orb during the free spins carries a multiplier. Reaching orbs without the collect will award a multiplier and reset to 3-symbols high, where a new set of fortune orbs are revealed.

The Phantasmic Fortunes slot is engaging, highly interactive and keeps players on the edge of their seat!

You never know when a random modifier will kick in and that’s all the fun! Free spins deliver even more value for money entertainment, especially with an unlimited number of games available in each round.

Wild stacks, multipliers and random modifiers can appear during this feature too and we’ve seen wins of over £10K produced on just a £1 bet, so big wins can happen regardless of how much you have to spin with.

Phantasmic Fortunes is a video slot title developed by iSoftBet. Other popular slots from iSoftBet include Shining King Megaways and Macau High Roller.

When was the Phantasmic Fortunes slot released?

What is the RTP of the Phantasmic Fortunes slot game?

Phantasmic Fortunes begins as a 5-reel, 3-row slot with 243 ways to win, but has the potential to reach 7,776 ways to win per spin.

Phantasmic Fortunes can be played on all devices, even mobile and tablet. You may need to rotate your device to landscape mode to launch the game.

What is the variance of the Phantasmic Fortunes slot machine?

Phantasmic Fortunes is a high variance slot game. High volatility slot game pay out less often on average but the chance to hit big wins in a short time span is higher.

Bets start at 20p and reach a maximum of just £20 with the Phantasmic Fortunes slot game. The maximum win is a pre-set multiplier of 13,867x.

A bonus round offering an unlimited number of free spins as well as random reel modifiers, reel expansion, multipliers, two wild modifiers and instant wins are offered with the Phantasmic Fortunes game.

Is there anything else that I should know about the Phantasmic Fortunes slot?

Wild modifiers can only be triggered via reaching their corresponding wild orb. Once triggered, the reel will reset. Players can expect stacks of wilds with both wild orbs which could ultimately lead to mega wins.

Go ahead with Skeleton Key by IGT, the 2021 release with mysterious expanding reels and a series of features. Collect the keys, unlock more reels and unleash big win fury via the free spins. This medium to high variance slot offers an initial 243 ways to win leading to 7,776 with a max win of 83,333x hiding within!