Yeeha! We’re off to the Old West, and to the mining days when health and safety were leaving a tunnel before blowing it up, and organising to improve your working conditions could get you railroaded straight in front of a firing squad!

Happy recollections of the birth of industrial capitalism aside, Bonanza slot is a historically themed game with a stand-out difference in its reels, of which there are many, which are not uniform either! Oooh. But are these wonky reels worth mining on the hunt for hidden jackpots?

This is the first big hit of the Megaways era, taking the new gaming engine to the mainstream. It’s packed with bonus features and non-standard innovations.

Bonanza is from Big Time Gaming.

When was the Bonanza Slot released?

What is the RTP of Bonanza?

What reels and pay lines does it have?

This game has non-standard reels with six reels up to seven rows of symbols high and with a final horizontal reel over the top that works in the respin feature.

What is the theme of Bonanza slot?

Can I play Bonanza Slot on mobile?

Yes, you can play this game if you have javaScript and HTML5.

What is the variance of the Bonanza Slot?

This game – like many Megaways games – has high variance, so you can expect bigger prizes on average, but they should arrive less often.

There is no jackpot game, progressive, or networked jackpot.

Does Bonanza Slot have free spins and bonus rounds?

Yes, there are free spins that retrigger on Bonanza. Free spins come with extra multipliers with no limit.

Cascading reels mean a respin on every win.

There’s a huge variety of Megaways games including Extra Chilli, and lots of big mining games, including Gold Diggers from Betsoft, and NextGen’s California Gold.

The Makers of Bonanza Slot

This is a game from Big Time Gaming. They say of themselves, that they are, “a collective of industry thought leaders with an extensive track record of innovation in online gaming.” But, I say of myself that “I’m a 6 foot 10 genius with a black belt in llap goch.”

BGT’s claims ring truer than mine, though, and the bios of their team do indeed look very impressive.

You’ll find their games at all the big UK casino sites, and they offer instant wins alongside their slots. They have a very strong graphic look – and seem to like sexy girls – to their titles and have recently launched a new range of games that claim to offer players an adventure-like playing experience.

Those games have great reviews so far. Among their most popular current titles in the UK market are: This game, Who Wants To Be A Millionaire Megaways, Donuts, Extra Chilli, and Danger High Voltage.

The RTP is more straightforward at an industry-standard(ish) 96%, with high volatility. The theoretical return to player (RTP) is a long-term measure and you shouldn’t use it as a judge about how your game will go in a single session. High volatility is relatively unusual, and it means that you are more likely to win fewer prizes, but the prizes that you do win are more likely to be bigger. This measure is also more statistical than something you should really consider too deeply when choosing a slot, most of which have broadly comparable player experiences.

You can play Bonanza online slot on tablets, mobiles and desktops. It uses JavaScript and HTML5. Bonanza has been on the market since December 2012. 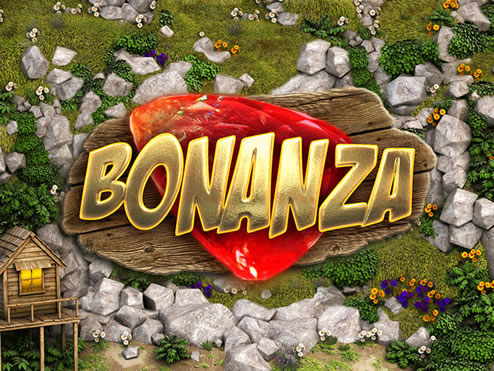 Despite all the bells and whistles, there is a lot about Bonanza that will be immediately familiar and welcoming to slots players.

Including the pay-table, where you’ll find card symbols topped off by a set of precious stones.

You’ll be expecting a lot of complicated extras here, and Bonanza doesn’t disappoint.

Cascading reels is essentially a respin-on-win feature, with blocks containing winning symbols exploding and new symbols dropping in until you get a winless spin.

The free spins feature is triggered when the word G O L D is spelt on the reels by Scatter letter symbols. There are 12 spins, but they can retrigger in sets of five for any scatter. There’s a multiplier that increases on consecutive winning spins.

Bars of gold in the mining cart retrigger the feature, with three bars winning five spins and four giving you 10. Both the spins and the multiplier are limitless.

How to play Bonanza Slot

Forget the complicated set-up and bonuses, to play this game all you need to do is press the big, green spin button on the right-hand side of the screen.

Staking is the bet total, set with arrows, and three-lines mark the menu button.

There’s an autoplay feature that allows you to sit back and play a number of clickless spins.

It should offer you – in UK jurisdictions – the option to stop on hitting win and loss limits.

There’s a lot to recommend Bonanza. It’s brimming with innovation and new ideas – there’s a boring willingness to sit back and just churn out another five-by-three game in the gambling design industry it would seem. The theming is well done and runs deep, with the rows of mining carts that drop extra symbols onto the reels adding yet another dimension to an already complicated and rewarding slot.

Our main criticisms are based on that complexity, which makes the screen busy and hard to read, and the styling. It’s entirely a matter of personal taste, but we just didn’t particularly like the look and the over-loud music (but if you check our reviews you’ll see we almost never like slots music!).

Looking around at reviews for this game we’ve come across a number that seems to suggest that there are particular strategies for winning at Bonanza. There aren’t, and any site that tells you that there are should be treated with the derision and scorn it deserves! Just play safely, take note of the RTP and the high volatility on this game and enjoy it as a diverting pastime!

We recommend you dig in and don’t get shafted, by checking out Bonanza slot machine at your favourite casino site now.

Rachel Pine is our slots expert who has worked in the online gambling industry for 10+ years. Over the course of her career, Rachel has reviewed more than 3,000 slots.