We review a ton of Megaways games these days. The engine has become one of the big hits in the online casino world in 2020, popping up all over the place, but it’s relatively rare that we look at a title from Big Time Gaming, the Aussie company who actually invented the system and have licensed it to a load of other developers.

Megaways has been licensed all over the place, but it’s coming home for this title, based on the TV reality series of island living, Survivor! The show isn’t our cup of tea, but it’s hugely popular, and is a good theme for a slot game, offering the chance to put some tropical vibes on the reels and introduce character dynamics.

The Survivor Megaways slot game was released in April 2020 and has been heavily featured at a number of UK online casino sites, featuring in around a dozen lobbies.

The game features realistic graphics and novel gameplay. Of course, the Megaways features means loads of ways to win, and big prizes are available at the top of a quite narrow staking range in a game with a good value house edge.

There’s a lot of bonus action and plenty of original features, plus a banging soundtrack to this game, but should you maroon yourself on this desert island?

Survivor Megaways slot machine is one of the newer released by Big Time Gaming.

When was the Survivor Megaways slot released?

What is the Survivor Megaways RTP?

Survivor Megaways slot has the return to player rate or RTP of 96.47% which is decent for high-volatile  Megaways slots.

Survivor Megaways has a classic Megaways layout of 6 reels 2 to 7 symbols high. The number of ways to win varies on each spin and it can reach the max of 100,842 betways.

Survivor Megaways slot was inspired by the reality TV show of the same name so the game is set on an exotic island. It comes with amazing design and high-quality graphics.

Yes, you can play Survivor Megaways slot online on your mobile device.

What is the Survivor Megaways variance?

Survivor Megaways slot is a high-volatile game as the rest of the Megaways games. It is capable of huge wins and you have to be patient and wait for the Free Spins if you want to have a chance to scoop some of the big wins.

The minimum bet in the Survivor Megaways slot is 20p per spin while the max stake is £20 per spin. With high volatility, this slot machine is worth playing as you can scoop prizes up to x44,000 the total stake!

Is there anything else that I should know about the Survivor Megaways slot?

The most paying symbol in Survivor Megaways slot is purple Tiki symbol that can bring up to x50 the total stake for 6 of a kind.

If you like this slot, then you can try out some other games in the Megaways series as they feature great winning potential. Kingmaker Megaways is similar to Survivor Megaways as it comes with accumulating multipliers that are transferred in the Bonus game as well.

Big Time Gaming certainly are a big-time company, but not really by virtue of having a load of big titles in the UK market. Compared to some, Big Time’s 36 titles, including some table games, is a very modest entry on the UK slot scene.

It’s the Megaways engine that is probably Big Time Gaming’s biggest hit! It’s a way of delivering wins via that changes the number of symbols on the reels for each spin at random and delivers a massive number of potential winning combinations.

The company was founded in 2011. Their slots are widely available, and among them is the massive hit, Bonanza Megaways, that is the biggest Megaways title to date. The company’s other biggest hits are Who Wants to Be a Millionaire Megaways, Monopoly Megaways, this title, Danger High Voltage, and Lil Devil.

It’s not many slots companies who have had a revolutionary impact in the way that Big Time Gaming have done with their Megaways engine, and you can enjoy their games at many UK casino sites.

The Facts and Figures about Survivor Megaways Slot

Survivor has an expected return to player of 96.47% or a house edge of 3.53%. This is probably slightly above average in the current market, though, remember, you shouldn’t expect this figure to reflect your own experience on the game, which can be very different. The medium-to-high volatility means the game is more likely to pay out bigger prizes but to do so slightly less often.

Higher-volatility games generally come with bigger prizes, and here the top prize is a meaty 44,000-times stake. Stakes run from 0.2 to 20 coins, which should be 20p to £20 in UK sites, but make sure you check the financial details on the game you’re using, and whatever they are make sure you’re playing with money that you can afford to lose.

The layout is atypical, with 6 standard reels (and 3 rows) and a possible 7th reel. The Megaways system always means lots of pay-lines, and there are 100,842 potential winning combinations on these reels, which spin with the help of JavaScript and HTML5 on any mobile, desktop, or tablet device you have. 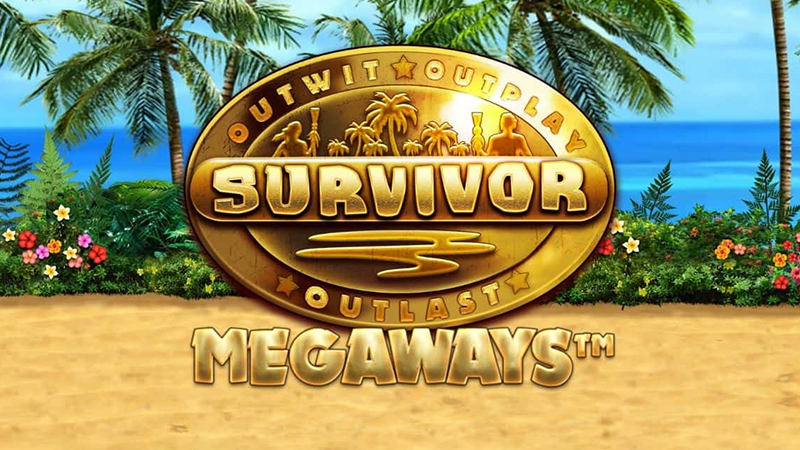 Load up the game and you’ll see a simple strip along the bottom of the screen that tells you (from left to right), your balance, game information (including wins), and the latest win amount. The game controls float on a panel to the right of the reels, with the stake control at the top, and the menu and auto spin button under that, and a big green spin button at the bottom. Further controls can be found in the game frame.

Click on that menu icon to check out the pay-table. There you’ll find:

The high-paying symbols are tribal masks, colour coded for value. The green mask pays a maximum of 0.7-times stake, as does the blue. The red mask pays 2.5-times stake, and the top-payer is the purple one, which will give you 50-times stake for a set of six on the reels.

Megaways usually come with cascading wins. This is a Reactions feature that triggers every time you win. Winning symbols drop out to cause a fall that allows new symbols to come in. Basically, it’s a type of respin that keeps going until the wins stop.

The male and female character leads are wilds. These sub in the normal way, and when an urn symbol lands on the reels their multiplier ticks up. Urns in the top section of the reels increase the red team’s multiplier, in the lower section they include the blue tribe multiplier. Urns drop out like winning symbols and allow a cascade that keeps going until no more urns appear.

The game logo scatter triggers free spins, starting with 15 spins for 3 scatters, 20 for 4, 25 for 5, and 30 for 6. The free spins play-out against a night-time backdrop with wild multipliers carrying over from the base game without resetting. You can retrigger the free spins round too with no limits.

Bang out a big win with all the multipliers in place at the top stake and you’ll have just about £900,000 in your account. That’s a very good top prize, and there are low enough stakes to play this game much more conservatively if that’s your bag.

This is a good looking game that also has an excellent soundtrack, as well as lots of variety in the gameplay.

If you want a Megaways game that’s challenging and potentially very rewarding then Survivors is well worth your time.

Rachel Pine is our slots expert who has worked in the online gambling industry for 10+ years. Over the course of her career, Rachel has reviewed more than 3,000 slots.