It’s Christmas! At least it was a couple of months ago, so Quicktime released the Polar Paws slot game at the end of November 2019 in order to cash in on the upcoming holiday season.

Quickspin are a big company with a good reputation, so it’s no surprise that this is a quality game that will have a life beyond the time frame of its release.

True to its timing though, Polar Paws slot has a cartoony look with a load of friendly Christmas- and Arctic-related symbols, in front of a big, frosty field of snow in the background.

As to the Christmas presents players might get… well, most people would be delighted to unwrap 4,000-times their stake when all the bonuses click into place. The bonus is the classic free spins round, that helps to add to a very generous set of stats as far as players are concerned, and this comes along with medium variance.

It’s Christmas still for slots fans, so let’s have a look at this title and see if you should be playing it into spring.

Quickspin is the developer behind the joyful Christmasy Polar Paws slot.

When was the Polar Paws slot released?

Quite conveniently considering the theme of the game, the Polar Paws slot was released just before the holiday season in November 2019.

What is the Polar Paws RTP?

Polar Paws slot comes with a high return to player rate that stands at 97.84% which is well above the industry standard of 96%.

Polar Paws slot comes with a classic layout of 5 reels, 3 rows, and 25 pay lines. To form a win you need at least three matching symbols on adjacent reels from left to right.

Polar Paws slot uses a winter/holiday theme. The design will transport you into the merry holiday season of Christmas time. There are cute and happy-looking bears on the reels as well as elves with presents.

Yes, you can play Polar Paws slot across all kinds of mobile devices such as Androids or iPhones.

What is the Polar Paws variance?

Polar Paws slot is low to a medium volatile slot machine. You can expect plenty of smaller wins that will keep your balance steady through the game.

The minimum stake at Polar Paws slot is 25p per spin while the max bet goes up to £100 per spin. In the Polar Paws slot, you win up to x819 the total stake on a single spin!

Polar Paws slot comes with an exciting Free Spins Bonus that awards 10 free spins. Keep an eye on the scatters as you get to collect them and they will turn bear symbols into wilds as well as award extra free spins. Sweets symbols are wilds with multipliers. Land 1, 2, or 3 on the reels and you will get a x2, x3, or x4 multiplier, respectively. There is also a regular wreath wild.

No, there aren’t any jackpots present in the Polar Paws slot machine.

Is there anything else that I should know about the Polar Paws slot?

Theoretically, if you get the most of this game and collect those wilds and multipliers you can win as much as x4,000 the total stake prize.

If you like winter or holiday-themed slots there are plenty you can enjoy. Yggdrasil’s Winter Berries slot is a classic slot with re-spins and multipliers. Also, the Secrets of Christmas slot by NetEnt is an excellent holiday slot with great winning potential and lucrative Free Spins.

Who is Quickspin then?

Quickspin are major players in the slot world, with a base in Sweden, like many of the world’s biggest and best online slots companies.

While, with nearly 70 games on the UK market, Quickspin is not one of the giants in terms of numbers of titles, the company has built up a sterling reputation since its birth in 2012.

Players like playing online video slots from Quickspin. They have a number of games in the top few hundred titles in UK markets as measured by our favourite audit site. They don’t have any current smash hits, but their games have longevity, like Skulls Up, Sticky Bandits, Wild Cauldron, and Eastern Emeralds.

Their new releases include Panther’s Reign, Golden Glyph, and Wild Chase Tokyo Go. Upcoming from the firm are Nero’s Fortune and Diamond Duke.

The theoretical return to the player here is very generous at 97.84% (or a House Edge of 2.16%). This compares to an industry average of around 96%. Now, this figure is not a guarantee of how you will do when you play the game, but more generous is always better. As is usually the case with games with higher RTPs, Polar Paws has a “medium” rated variance (also called volatility). This is another fairly imprecise measure that plots the size of prizes against their frequency: low volatility games pay out more often but pay out smaller prizes.

The highest possible win is 819-times stake. Stakes can run from 0.25 to 100 coins (this should be 25p to £100 in UK sites, but check that you know all the coin values and financial limits on the game you’re using).

This five-by-three grid game has 25 pay-lines, and has been available on all mobile, desktop, and tablet devices that support HTML5 and JavaScript since the end of November 2019. 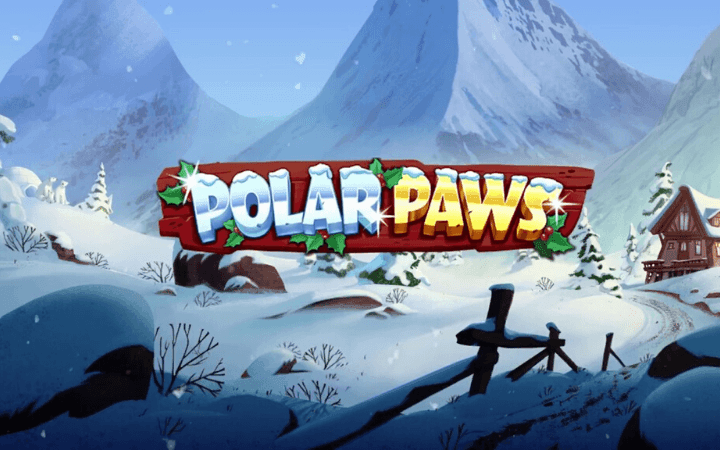 Playing a slot shouldn’t be complex, and Polar Paws slot packs in innovations without overcomplicating the playing field. This is how you play, Polar Paws:

Welcome to hell if you hate Christmas. Of course, most of us are decent, god-fearing folk who love the year’s biggest holiday…

In any case, the pay-lines are filled with these symbols.

Then a set of polar bears appear, all paying 8-times stake for a set of five. The bears are a scarf-wearing guy, a baby bear (aww), and a polar bear with mistletoe (yoiks!).

The polar bear in disguise pays 10-times for a set of five.

There is also a wild that subs in to pay 40-times stake for a set of five.

The game opens showing you the multiplier wilds and the polar bear symbols going wild, two of the main bonuses in this game.

Bonuses are triggered on the reels, and also with a ladder up the side of the reels.

Multiplier wilds show up at random and behave like the standard wild.

Elves are Scatters and trigger a free spins round. A set of three lands you 10 free spins, plus a 3-times multiplier on your current win.

The ladder up the side of the reels comes into play in this round, with elves sending you up the progression towards triggering wild bears. This Bears Turn Wild feature turns high-value polar bear symbols into wilds and grants you extra free spins, up to a maximum of six.

This is a great-looking and sounding game that you should definitely check out whether or not you love Christmas.

The animations and symbols are cute as hell, with a great backdrop, and even good music.

The gameplay is good as usual from Quickspin, who have also put effort into developing decent bonus features that look good and perform well at delivering both big wins and adrenaline thrills.

The better-than-usual return to player is the Christmas gift that keeps on giving through the year, and one of the biggest reasons that you should unwrap this big hit game months after your tree has wilted!