Yggdrasil has a very difficult to pronounce name for British tongues. But all of those people who aren’t quite sure how to say the name of this Swedish company are bringing it up all the time because Yggdrasil must be one the standout names in the slot world when it comes to innovation in gameplay and graphics.

That’s no excuse for the terrible spelling of Cazino Cosmos slot in this title, but we’ll forgive Yggdrasil for that with this new title that was released in January 2019.

This game is a follow up to Cazino Zeppelin and has a similar steampunk, a retro-futurist aesthetic that – as usual – is beautifully delivered by these Swedish masters.

The big attraction – beyond the graphics and atmosphere – is a free spins round with a load of extras attached. This delivers a very healthy looking top prize.

But should you take your “cazh” to this “cazino”?

18+ – sign up to play in demo mode at the following casinos:

The Lowdown on: Cazino Cosmos

Yggdrasil take their name from Nordic mythology and often theme their games that way, but this is a classic steampunk title given a load of gamer-friendly features.

When was the Cazino Cosmos slot released?

What is the Cazino Cosmos RTP?

RTP here is 96%, a house edge of 4%, a figure that we usually quote as the industry average.

What reels and pay lines does the Cazino Cosmos slot have?

What is the theme of the Cazino Cosmos slot?

Yes, you can play on any device that supports JavaScript and HTML5.

What is the Cazino Cosmos slot variance?

The variance of this game is high, so expect bigger prizes but also to wait longer between wins. The hit frequency suggests around 1 in every 28 spins should be a win.

There’s no progressive or networked jackpot.

Does the Cazino Cosmos slot have free spins and bonus rounds?

Yes, free spins are the main bonus round. Lots! There are two types of free spins, the collection version coming in five forms with a load of extras in the forms of multiple wilds.

This game has real depth in its characters and aesthetic.

You could try the original, Cazino Zeppelin, or the similarly themed Fortunium from Stormcraft. Yggdrasil’s Holmes and the Stolen Stones is also a relative.

The Facts and Figures about Cazino Cosmos Slot

Yggdrasil do a lot of innovative work, and their games have a particular look. While they make some striking visual moves you’ll still find that the game follows quite a standard experience in a lot of ways.

The set-up is the classic five-by-three grid of symbols on the reels, with 15 symbols in all. There are 20 pay-lines weaving their way across these reels, and if you hit them you could win a top prize of 236,420 coins.

An odd number, but that atypicality is fairly typical of Yggdrasil.

To win that sort of return you can bet from 0.1 to 20 coins. That should translate to 10p to £20, so taking in a good range, but you should be sure to check the details of these figures at the time you play the game on the site where you’re playing it.

Cazino Cosmos slot is available using JavaScript and HTML5 and you can play it across operating systems and devices. 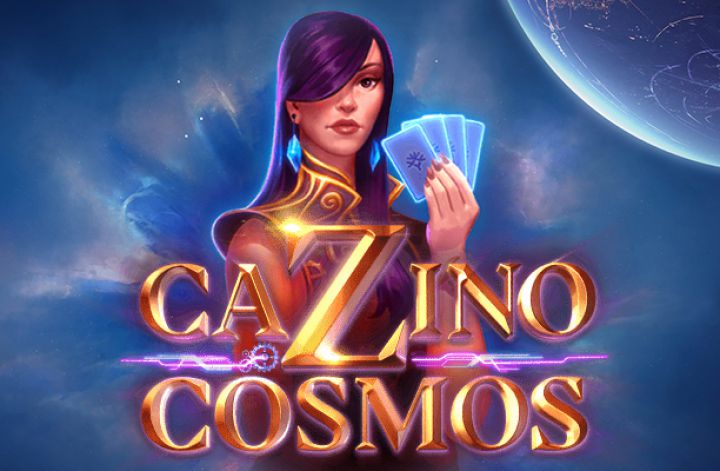 The screen in Cazino Cosmos slot is very striking, set up to look something like a Jules Verne-style space ship – retrofuturist to the core!

Underneath the reels – though sadly with no steam coming out – is a control panel.

On this panel, you can set the number of pay-lines you bet on, and the value of the coins you bet on, with your total wager filling a third of the set of windows at the left of the panel.

In the centre, your game information scrolls up, and to the right are your win amount and the total balance in your chosen currency.

In the centre sits a purple, illuminated spin button flanked to the right by an auto-spin function that opens up a sophisticated set of options and a maximum bet button.

A plus button above the controls opens up a menu of extra choices: pay-table, options, rules, and sound.

You can see the pay-table values by clicking on any symbol on the reels. As far as we know this is unique.

The symbols are as beautiful as the game screen.

That’s quite a limited set of symbols, but there’s a lot more to discover in the bonus games, which relate to the wild – a young woman.

The wilds come in collections – with colour-coded bases – or standards. The collection wilds stand in for all symbols and are added to collections of wilds over the reels. The gold wilds just do what wilds always do.

The wilds also retrigger sets of five free spins when one appears on each reel during free spins. These wilds are sticky and remain on the reels.

There aren’t many games that we could just look at for pleasure, but Cazino Cosmos slot is one of them. The designers at Yggdrasil are onto something special, and if you like their style – we assume not everyone does – then this is another sumptuous title, with beautiful music and a worked-through aesthetic that matches the best of video game design.

Where to find fault then?

Well, high volatility games come with a certain amount of risk attached, though the 96% RTP is perfectly standard for the industry so you shouldn’t be too concerned.

And, it’s complicated. While many players are looking for simple games with simple graphics to work well on small screens, Yggdrasil have delivered a deeply complicated and engaging one. You don’t need to learn a huge rule book to enjoy this game, but if you want to there are some deep levels of gameplay here.

We love this game, and we think you should play this Cazino Cosmos slot game at your favourite online casino site now.