Blackjack, one of the easiest games to play, and a game where some people find luck and others don’t. Sure, it’s frustrating when you drop a couple of hundred pounds/dollars on a table and walk away with nothing, but next time that happens spare a thought for the following people and thanks your lucky (or is it unlucky?) stars that you walked away relatively unscathed. 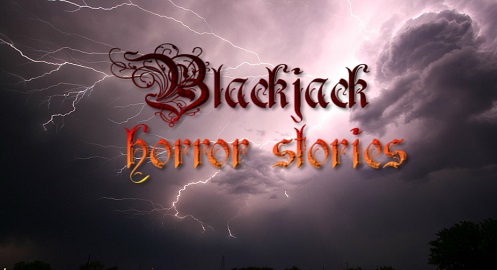 The Perils of the House: The Danger of Being a Blackjack Dealer

When Joyce Rhone spent the night dealing blackjack at the Bellagio Casino, Las Vegas, back one fateful December night in 2012, the last thing she thought would happen was her attempted murder at the hands of a crazed customer.

The culprit, Brenda Stokes, wasn’t angry at losing any money though. No, she was angry at losing her husband to an affair she wrongly believed them to be having. If it wasn’t for another punter taking her down, Brenda Stokes would have slashed the Bellagio employee to death – she’d already murdered someone earlier that night.

The Perils to Your House: Compulsive Gambling

It’s not just the dangers that you face in-house; it’s the dangers against your house, namely losing it to bankruptcy. That’s exactly what reportedly happened to Jenny Kephart when, in a single night, she ran up a $125,000 debt with Harrah’s owned Caesar’s Riverboat Casino (now renamed) in Las Vegas.

The casino took her to court to recuperate the money. She wasn’t happy and decided to countersue. She claimed that the casino was at fault for allowing her to borrow the money when they knew she had a gambling addiction.

The case eventually ended up at the Indiana Supreme Court, where the judge ruled in favour of the casino. If it had ruled in Kephart’s favour, it would have set a precedent for casino liability for money lost to gambling addiction.

For now, in Indiana at least, you have to control your own compulsive gambling habits: stay away from the casinos of your own volition. That’s the hardest thing to do when you have a hard-core addiction.

You know the rules, though: the House always wins…even when it goes to court!

The Perils to Your Freedom: Not Getting Home

Another gambler that ran up huge debts with the Las Vegas casinos was Joey Porter. While the others got away with the mere punishment of repaying debts they’d run up, Porter had to spend 3-days in debtors’ prison.

He was eventually released a few days later upon repayment of his debt to the Hard Rock Casino. It should serve as a warning, though: you can go to prison if you don’t repay your gambling debts.

The Perils to Your Billionaire Status: High Rolling

Don’t feel too sorry for him though, the guy was a billionaire and he loved to gamble. As well as losing big at the blackjack tables, he’s won big too. And, when he won $20 million at the Las Vegas Hilton one New Year’s Eve, he tipped the dealers a whopping $1.3million! A great day to be a blackjack dealer.

The Perils to Your Business: High Rolling

While Kerry Packer pretty much had a good time during his gambling expeditions, the same can’t be said for another businessman, Terry Watanabe. He inherited a highly successful gift shop business from his father.

You wouldn’t think the gift shop industry produced multi-million dollar businesses, but Watanabe managed to sell the business for an undisclosed sum. Whatever the sum, it allowed him to lose a massive $200million on the blackjack tables over the course of a year.

That year, his bets represented 6% of gross revenue at Harrah’s casino. He decided to sue the casino on the same grounds as Jenny Kephart, but lost too.

In an odd twist, Harrah also owned the Caesar’s Riverboat Casino that Kephart tried to sue. Is there any merit in the suggestion that they’re too predatory with people that have gambling addictions? The courts say no.

What are your thoughts? Are compulsive gamblers responsible for their own behaviour? Let us know what you think.