Firmly holding onto the title of the industry leader, Microgaming keeps giving old and new competitors a run for their money. 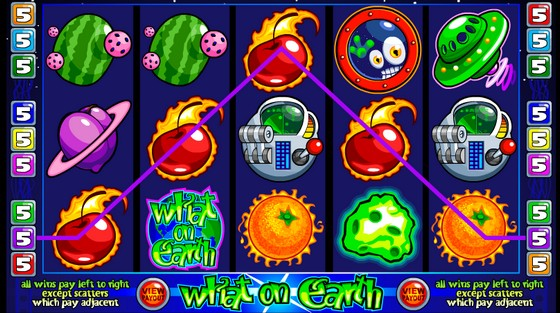 Play What on Earth at Videoslots Casino

Number 8 in the 8 top Microgaming slots is What on Earth. If for nothing else, this game has to be played for the ‘Beam ‘Em Up’ bonus round triggered by Scatters. It prompts you to beam up Earthlings that will award multipliers of x3 to x200.

Should your chosen alien pick up the globe, you’ll win the Destination bonus which will have you steal/kidnap the Statue of Liberty, a Mandarin, Queen Elizabeth, or a mummy to win 400x your bet.

If you find a contest ticket instead, you’ll enter the Beam ‘Em Up Contest and start abducting as many of your fellow humans as possible within the given time. 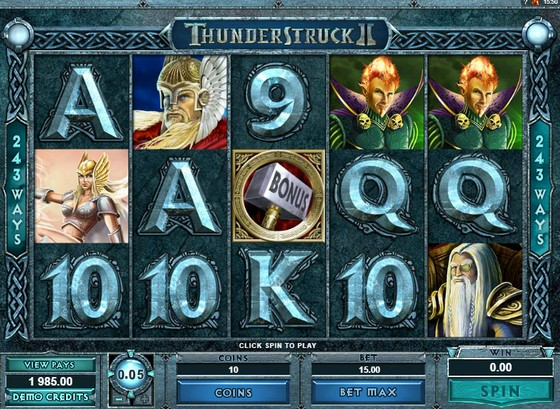 In 7th place comes Thunderstruck II. In this game you will come across the logo, substituting and doubling the prize, a random feature striking to turn reels (up to 5) Wild, and the Great Hall of Spins with multiple entries, unlocking further bonus features.

In addition, Valkyrie, Loki, Odin, and Thor each deliver different combos of free games and multipliers or additional Wilds.

If we tell you there are 2.4 million coins to be won, I’m sure you’ll be heading straight to Mr. Green, Leo Vegas, or Play Luck Casino. 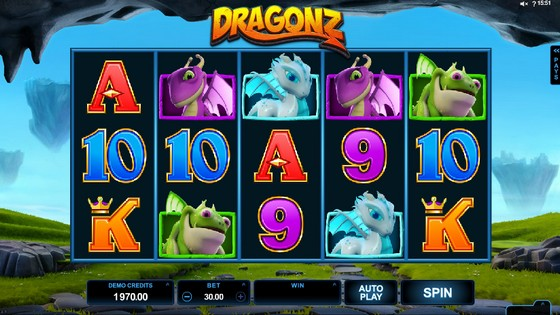 Ranked 6th in the 8 top Microgaming slots is Dragonz.

If Wilds are your favorite feature, then this game is for you. You’ll be offered Flaming, Stashed, Frosty, and Winning Wilds, along with the Wild deal.

Red dyno called Flint fires them onto the reels while purple Switch stores non-winning Wilds, and, having collected 3 or more, randomly distributes them over the reels to guarantee a win.

Meanwhile, Blue Frost freezes non-winning Wilds in place until they finally cash out and Green Gobble randomly spits Wilds as long as they contribute to a win.

All this action takes place while you’re spinning for free. Additionally, any non-winning spin with a Wild icon deals 3 extra Wilds for a sure win.

This 243-ways top Microgaming slot can be played at 32 Red, PlayOjo, and Play Luck casinos. 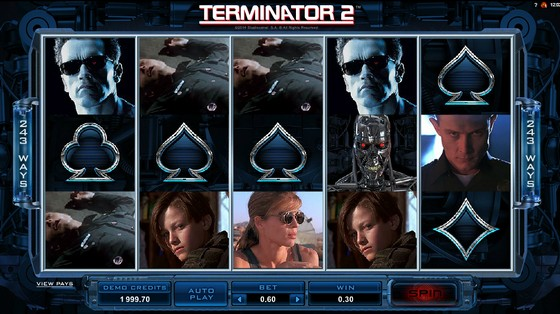 Number 5, in the 8 top Microgaming slots, is Terminator 2. Fans will surely enjoy this game as it features scenes from the movie and cleverly incorporates some of the recognizable story elements.

If you get 3+ Scatters to appear simultaneously, you’ll trigger the free games round with 1,024 ways. While you’re spinning for free, the shape-shifting Terminator transforms into any of the other symbols to award the highest possible win.

The T-800 Vision feature randomly triggered on any non-winning spin requires that you land only one Scatter to launch free games.

Go save the world at Regent Play. 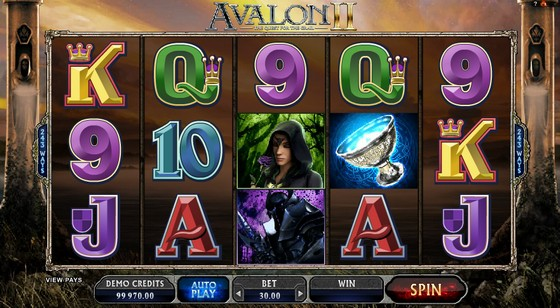 4th place in the 8 top Microgaming slots goes to Avalon II. While hunting for the Holy Grail, you’ll be offered to reforge Excalibur at the Lake of Legends, pick an extra Wild at Misty Vale, match helms on Dusky Moors, fight the black knight in the Hall of Shadows, and spin the wheel of fortune on the Isle of Avalon.

You’ll be picking and clicking, rolling dice, matching icons, and more, while Merlin randomly appears to award a cash prize or a multiplier, Wild Lady of the Lake expands across the entire reel, and Rolling Reels increase multipliers with each consecutive win.

Demonstrate your warrior skills and potentially walk away with as much as 480,000 coins at Casino Luck and Miami Dice casinos. 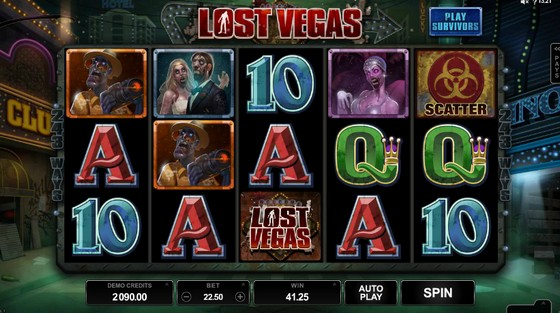 Lost Vegas comes 3rd on our list of top Microgaming slots. This game enables you to join either the walking dead or the frightened humans fighting to escape flesh-eating Zombies.

Depending on which side you pick, game symbols will change and so will the features. Scatters trigger Free Spins with either the Stash feature (Survivor mode), which removes all low-value icons and pays cash for each, or the Infection feature (Zombie mode), which infects the reels with full zombie stacks and turns single Wilds into stacked ones.

The Blackout bonus strikes randomly and makes all high-value symbols pay, while the Zombie Fist shows up randomly on non-winning spins to throw some cash in your direction.

Lost Vegas can be found at PlayOjo, Mr. Green, or Leo Vegas Casino.

#2. Tomb Raider Secret of the Sword 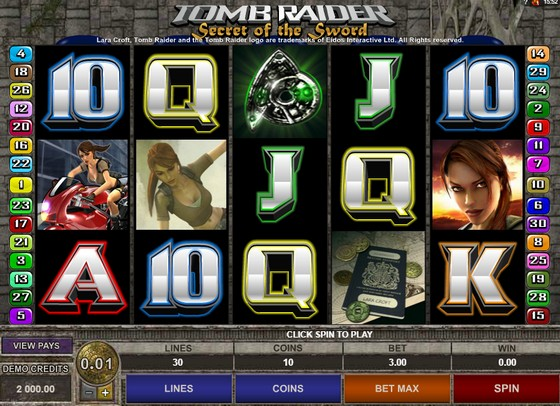 But the real treat is the Global Adventure Bonus, triggered by a passport landing on the central position of a reel. Make this happen on each of the reels and you’ll get whisked off to an adrenaline-filled adventure where you have to search for hidden sword fragments in different locations.

The Hidden Treasure bonus will either give you all wins for the particular location, x2 multiplier, a bonus value, or entry into the Shootout bonus round.

You can play with the invincible Lara Croft at 32 Red and Play Luck casinos. 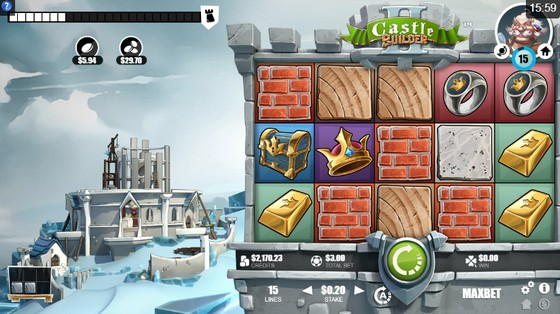 Castle Builder II takes first place in the 8 top Microgaming slots. This is an incredibly engaging slot with multiple storylines and 15 unique kingdoms to build castles in.

You’ll be switching between 3 player avatars with different building skills, collecting material for building blocks, and as the construction progresses, reject or accept the admirers who show up to propose to the prince or the princess who’s getting a new castle built.

For the royal wedding to take place you’ll have to pick one of the admirers, who will thank you with a cash prize. Meanwhile, the more castles you built the more experience you’ll be gaining and leveling up your avatar.

There’s simply too much going on to share it all here, so go explore this game for yourself at Miami Dice or Videoslots Casino.

Microgaming was established in 1994. In the same year, the company developed its first online casino software.

Afterward, in 2004, they started creating mobile casino software. Currently, Microgaming has more than 1500 games, including branded blockbusters such as Jurassic World™, Game of Thrones™, Immortal Romance™, Lara Croft®, and so on.

Microgaming’s progressive jackpot network is considered to be the largest in the world. However, the company cares more about its games, operators, and players than any kind of numbers. That’s why they have co-founded eCOGRA (e-Commerce Online Gaming Regulation and Assurance), which sets the standard for responsible gaming.

8 Best Other Online Slot Providers to Try Out

Loving Microgaming? Here are 8 other amazing slot providers that you’re bound to like:

#1. Can I Play Microgaming Slots on My Mobile?

The short answer is yes, you can play Microgaming slots on your mobile. Microgaming developed its mobile casino software in 2004.

Currently, the company owns more than 350 games that can be accessed on any portable device (Android, Samsung, iPhone, and so on) via “instant play” or downloadable apps.

#2. What Is the Culture of Microgaming as a Company?

The company creates an atmosphere where the employees are encouraged to be:

#3. How Many Microgaming Slots Are Out There?

Nowadays, Microgaming has more than 1500 games available for the players. 800+ are the company’s casino games while 700+ are top-performing partner games. Among the 1500 games, there are branded ones such as Jurassic World™, Game of Thrones™, and so on.

#4. What is the Microgaming Slot With the Highest RTP?

Couch Potato is the Microgaming Slot With the Highest RTP (97.43%). The game has only one payline so it’s not as smooth as you would think, but it does come with a high payback, so it’s worth a try.