Barcrest is one of the longest established names in the slot business, with a history that long predates the internet.

They’re still a big name in the online video slots world, with more than 2% of the total of all games in UK online casino sites, and nearly 5% of the games that appear in casino site lobbies – the games they want to show off to players.

Barcrest’s most popular titles are quite traditional, and the biggest series is undoubtedly the Rainbow Riches series, which has more spin-offs than Star Wars.

This Super Star Turns slot game has a retro feel about it too, with acid colours, straight out of a 1980s TV game show. Those old styles are popular at the moment, but the modern slot player wants a bit more in terms of gameplay, so Super Star Turns offers up a free spins bonus game and tiered prizes that reward higher staking.

Should you cash up and give this game a spin?

Let’s have a look at our review!

Super Star Turns slot is a game developed by Barcrest that is all about riches and luxury.

When was the Super Star Turns slot released?

What is the Super Star Turns RTP?

The RTP or return to player rate of Super Star Turns slot is right on the average side and stands exactly at 96%.

This slot comes with a standard slot layout and features 5 reels, 3 rows, and 40 pay lines and three special wheels on top of the reel board.

The theme of Super Star Turns slot is luxury and money. Therefore, on the reels, you will see luxurious cars, big stacks of cash, beaches, and cocktails, and similar associations to a lavish lifestyle.

You can enjoy Super Star Turns slot online on your mobile device as long as you have a stable internet connection.

What is the Super Star Turns variance?

This slot comes with high variance. This means that you can more often expect smaller wins while for bigger ones you will have to be patient.

Super Star Turns can be played from as little as 10p per spin which is quite suitable for low-rollers. The max bet, on the other hand, goes up to a huge £500 per spin. The top prize you can obtain in this slot is £250,000!

Super Star Turns comes with a Free Spins bonus that is triggered by 3 scatters on the reels. You get to spin the Wheels and can progress up to the main third wheel that can bring most of the free spins and multipliers. On the last wheel, you can get as many as 50 free spins or x500 prize!

Is there anything else that I should know about the Super Star Turns slot?

The top prize is x500 the total stake and if you play with the max bet on, there is a possibility of earning the massive £250,000!

There are plenty of slots with similar themes you can explore. So if you like Super Star Turns slot, you can also try Break Da Bank Again, Big Banker or Foxin’ Wins slot based on a fox who lives quite a luxurious life with all the perks possible.

The raw stats of a game are a great place to start when you assess it, but it’s also worth noting that there are limits on how these stats actually translate into your playing experience, which might be in quite a limited way.

The first figure to look at is the theoretical return to player, which in this case is trailed as 98%. That’s really generous, with the current average being about 96%. However, this figure is almost certainly influenced by the betting system here that rewards higher staking, and a closer look confirms that the RTP actually runs from 94% in the base game up to the maximum in the highest staking level. The game’s rating as “high variance” confirms this. This means that bigger prizes are paid out, but that the game pays out less often. Both are long-term measures and you shouldn’t necessarily expect to see them reflected in a single session with the game.

The traditional layout is a 5 by 3 grid, but the 40 pay lines that cross it is a high number. 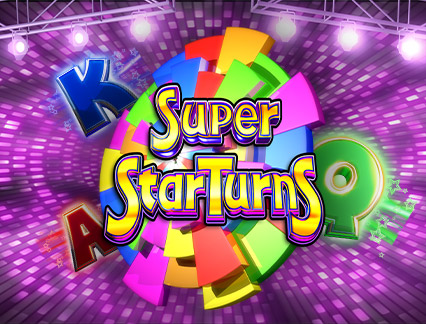 The base game should come as no surprise to slot players.

The green spin button sits to the right of the reels. Underneath it is a Bet window that allows you to set the total bet amount with no tweaking of pay lines.

Under this, a row of three controls allows you to trigger the Big Bet feature, find out more information and set up the autoplay function. The game controls including sound and help and balance amounts are in the game frame.

The pay-outs then double for the first part of the big bet feature, the £20 round.

For the Big Bet 30 round, the pay-outs of the original game are multiplied by three.

In the base game the wild subs in for any symbol except the scatter.

The scatter is the big prize wheel and three of these symbols start the Super Star Turns Bonus game.

Three scatters give you a green wheel, four means the blue wheel is in play, and the red wheel is given to players who score five scatters.

In the free spins rounds, the lower value card symbols are taken off the reels. The spins can retrigger, but only up to 3 extra free spins. The scatter is only in play on reel five in the free spins bonus round.

Big Bet rounds play in rounds of five with no pressing of the spin button.

This retro-style slot with its double game reminiscent of old-style pub fruit machines and TV game shows actually delivers right up to the minute gameplay.

Throwing so many levels into the mix gives players an engaging game with a lot of choices to make. Deceptively simple would be the perfect description of this game.

Our criticisms will have to be around the staking and RTP. It’s possible to burn through a lot of money very quickly in the Big Bet rounds. While the RTP in these games is very generous, that’s paid for with a base game house edge that is quite a lot higher than the industry average. Don’t get carried away playing this game!

The big top prize and the excellent experience are hard to ignore though, and we think you should give these Super Star Turns at the online casino site of your choice ASAP!